Share All sharing options for: Sorry PECOTA, Edwin's For Real

Edwin Jackson has never pitched like he did for The Don Cooper.  Since he became a full time starter, his best stretch of 11 starts* prior to being subject to Coop's magic was from May to June 2009.  Jackson compiled 63 strikeouts to 21 walks and ended it giving up 3 runs to Houston over 7 IP, 5K and no walks.  For the Coop stretch, EJ K'd 77 and walked 18 that added up to a 3.24 ERA.

And for the record, SSS thinks that represents the start of something beautiful.  The community projected a 3.75 ERA for Jackson, good for the Sox' second best starter in ERA after John Danks.  Yeah, technically Jackson's posted an ERA that good before, but while his peripherals were improved across the board, they suggested an ERA in the 4.25 range.  Which is pretty much what he did in Arizona.  Solid, but our projection is a full win better over a full season.   Such is the fully justified power of Coop in SSSer minds; Don Cooper has earned fealty and tribute for turning Danks, Floyd and Thornton into some 30 fWAR over the past 3 seasons.  In this case, Coop spotted something in Jackson's delivery and got Edwin to buy in:

"It was just a matter of standing tall and not collapsing on my back side, which allows me to be more around the plate, and have a better angle on the ball," Jackson said on "The Waddle & Silvy Show" on ESPN 1000. "It wasn't like a major mechanical thing. It was something small, which normally it is.

"We're asking him to get better at throwing strikes, and getting ahead in the count," Cooper said Wednesday on "Chicago's GameNight" on ESPN 1000. "When he struggles, he's falling behind and walking guys. We want him to put more balls in play."

Sounds simple, just like the tweak Cooper made to Jackson's mechanics.

The results obviously changed, but it would be nice if we could point to a concrete physical change in his pitches.  Having gone back and checked a few starts, it seemed like he was throwing more strikes and doing it earlier in the count.  I expected to find that Edwin was getting more drop on his slider and improved the movement on his fastball.  Instead, Pitch F/x suggests the changes are almost entirely due to the increased number of strikes:

As it turns out, the slider is getting far less drop, not more, which may be explained by the fact that he's throwing it harder.  Except the increased velocity across the board hasn't done all that much for the whiff rates.  They're static with the exception of the change-up.  Instead, swing rates are up all across the board, which leads to more total swing-and-misses and hence strikeouts.  On top of that, most of those additional swings came on pitches in the strike zone.  Jackson turned up the velocity a bit, threw more strikes but suffered no loss of stuff, resulting in a lot more K's and far fewer walks.  A small change yielding big results and, hopefully, another notch in Don Cooper's belt.

But y'know, we might be able to do even better, thanks to mlb.tv.  In the very least, we can all have some fun squinting: 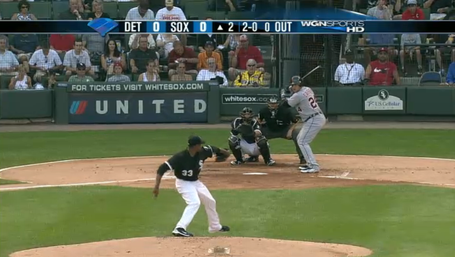 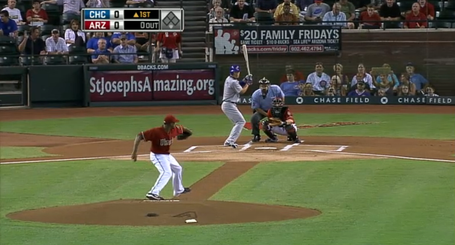 Caveat: there are very clearly different camera angles at work here.  That screws up perspective.**  So any conclusions based on a two still frames from different angles are seriously tenuous. I absolutely never would have noticed unless I was looking for it, which makes this all the less scientific.  I watched the tape, so that's slightly better.  But what I saw and try to show here is a very slight change, so it's all the harder to capture in the first place.  Anyway, here's what I think:

There are a couple ways to go from standing straight up to moving sideways.  You can sit on your back leg and then propel yourself or you can rock in the opposite direction on that back leg and fall a bit and then start pushing off your instep.  Realistically, you're going to do some of both, especially since it's on a mound, but my guess is that Don Cooper wanted Edwin to change the proportion somewhat.  And from watching the tape, I think I see Edwin sitting down more on his back leg in the second frame rather than rocking back.  In theory, this means more weight on the backside and a slightly more difficult shoulder rotation resulting in somewhat less velocity.  I think it could also make the landing point of the front foot more variable, which might affect location.

Really, though, this part is more Magic Eye than meaningful.  We've nailed down that there are significant changes in output from the black box that is Edwin Jackson's mechanics and given what we know about Don Cooper's intervention and his track record, it's more than enough to justify the community projection even if we don't have the tools to identify it precisely via tape.  I would love to get Edwin to sign to, say, a $10M/year extension and I've been wondering how susceptible Scott Boras is to some kind of Stepfordian subterfuge.  If that's a little morally questionable, there are alternatives.  Presumably Vegas does FIP over/unders for Sox starting pitchers. Maybe we can just raise the money ourselves.

*I'm defining this using a version of FIP that only tracks strikeouts and walks.  Why?  For one, (K-BB)/PA predicts runs allowed REALLY well.  Also, 11 starts is a fairly small sample size, so looking at actual runs given up doesn't make sense.  Neither does using the normal FIP because it uses HR.  Even BB/PA is a bit of a stretch, but we've got ~300 PA or so in each sample, so it's good enough for government work.  The exact conclusion we draw would be like: he absolutely established a K rate well above his career norm whereas it's merely likely he was demonstrating BB rate skill beyond normal.

**Colin Wyers has written a number of articles on why this screws up a lot of our batted ball data and introduces a lot of noise and/or bias (I forget which).  I'm imagining him as Obi-wan feeling the deaths of millions of Alderaanians right now.