Have Gun, Will Travel: Looking at the AL Central Right Fielders

Share All sharing options for: Have Gun, Will Travel: Looking at the AL Central Right Fielders

Oh happy day!  Depending on when you actually read this, pitchers and catchers are arriving or have arrived in the Copper State.  The entire team should be there by Monday, with the first full squad workouts beginning on the 22nd.  I can almost smell the pine tar.  One might question the wisdom of compiling division position rankings before spring training battles have even begun.  Luckily for me, the true position battles of the division seem to be taking place in the positions of high defensive importance.  And since we're inching up from the bottom in this series, I'll actually have more info on who will be playing shortstop and second base for the Cleveland Indians and Minnesota Twins when the time comes.

No one will confuse anyone playing right field in the AL Central for a Gold Glover.  Carlos Quentin (White Sox) and Michael Cuddyer (Twins) are absolute butchers in the field and will be competing for the title of worst defensive right fielder in baseball, let alone the division.  Magglio Ordonez (Tigers) and Jeff Francoeur (Royals) are two veterans whose best years are behind them.  Shin-Soo Choo is one of two stud players the Indians have on the shore of Lake Erie (Carlos Santana is the other, if you were curious).  Choo is the obvious top dog, but how do the rest of  these players rank out? 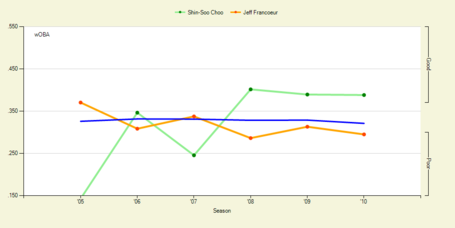 I almost feel bad comparing them.

Cleveland: The past few weeks, it has seemed like I've been hating on Cleveland.  That ends now that we're in right field.  Over the past three seasons, no right fielder has had a higher wOBA than Shin-Soo Choo.  He finishes third in the majors in WAR over that same stretch of time, coming in just behind Jayson Werth and Ichiro Suzuki.  And he did this on a team that has averaged 71.66 wins those seasons.  It is truly unfortunate that he is spending his peak seasons on such a crappy team.  He has been a 20-20 man the last two years and is good for an OPS just south of .900.  He murders fastballs, and the only pitch he somewhat struggles with is the curveball.  Choo is only slightly above-average defensively, but with a bat that good it just doesn't matter.  Shin-Soo Choo stands head and shoulders above his divisional competition.

Kansas City: Just as Shin-Soo Choo is clearly the top right fielder on this list, Jeff Francoeur is the worst.  Dayton Moore finally brought his dream player to Kauffman Stadium.  A mere six years ago, he was baseball's next wunderkind.  In 274 PA for the Braves in 2005, he amassed 3.1 WAR on the strength of great defense and a .249 ISO.  But then pitchers realized there is no need to throw anything in the strike zone when Francoeur is up to bat.  For his career, he has swung at 37.4% of pitches outside of the strike zone.  That is exactly 2% less than Vlad Guerrero, but without the true talent.  Pitchers found the holes in Jeff's swing, and he is now on his fourth team in as many seasons.  It's hard to get much value out of a player who has to struggle to keep his OBP above .300.  Francoeur is mercifully just a placeholder.  Once Wil Myers adjusts to his conversion from catcher to right fielder, Frenchy will be on the move yet again. 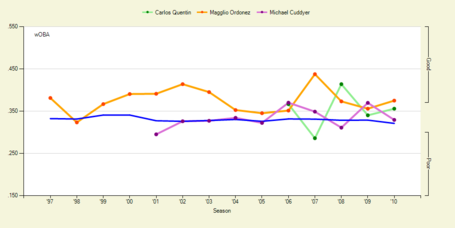 Detroit: Dave Dombrowski decided he still likes Magglio Ordonez enough to pay him $10MM this season.  If he can stay healthy, he should have no problem being worth his contract.  Maggs doesn't move as well as he used to, but that's to be expected from a 37 year old with past knee injuries.  His bat has hardly been aging though.  He's had a .376 OBP over the past three seasons and will most likely have an OPS over .800 yet again this year.  Ordonez will never hit 20 homeruns in a season again but 15 homers with 20+ doubles is more than reasonable.  If the Tigers give Maggs a decent amount of days at DH, which will be difficult with Alex Avila and Victor Martinez on the roster, things should go fairly smooth for Detroit in right field this season.

Minnesota: Michael Cuddyer is a man without a true position.  Last season alone, the Ron Gardenhire used Cuddy at 1B, 2B, 3B, CF, and RF.  And he's bad at all of them!  When the rest of the team is healthy though, Cuddyer is found regularly in right field.  This decision has cost the Twins just north of 3 wins over the past two seasons.  He's not quite as terrible as Carlos Quentin defensively, but he's getting there.  So why do the Twins keep giving him a glove?  For the same reason we keep putting Q! in the outfield: they're too stubborn to use Cuddyer as a DH.  While he has had two seasons with more than 20 homeruns (and one with 32 out of nowhere), I don't see him reaching that level again.  He could be a useful player, but his bat just isn't strong enough to make up for how miserably bad his glovework is.

Chicago: Carlos Quentin, our stumbling demigod.  The further removed from 2008 we become, the more likely it seems that his magic season was nothing but a fluke.  That's not to say he won't be productive.  He'll still hit 25+ homeruns with an OPS above .800, but those dreams of 35+ homerun seasons with an OPS over .900 are merely the stuff of pipes.  Quentin's worth is crippled by his horrific Jermaine Dye-esque defense.  His -32.7 UZR/150 last season was the worst in baseball for players who logged more than 800 innings in right field.  At this point in his career it seems improbable that Carlos will become a much better defender, but if he could improve to the point of just being bad instead of awful, it would go a long way towards establishing a higher level of worth.

Conclusions:  As I wrote before the jump, Shin-Soo Choo is the mountain top in this group by a great margin and Jeff Francoeur represents the deep and terrifying abyss where the valley should reside in the metaphor.  The only true question is how you choose to rank the right fielders on the contenders along the slope of the mountain.  Even though he is the oldest member of the club, Magglio Ordonez is still the second best in the division.  Carlos Quentin comes in just ahead of Michael Cuddyer, as the difference between his bat and Cuddyer's makes up for how much worse his defense happens to be.  Next week I will be finishing the outfield previews by tackling center field.