Sultans of Swing: Looking at the AL Central First Basemen

Share All sharing options for: Sultans of Swing: Looking at the AL Central First Basemen

In this space a mere week ago, I took a look at the men who gallantly stride to and from the dugout three to five times a game, and then spend two to three hours sitting on the bench: our AL Central DHs.  This week, and every other week following, I will slide my attention one rung higher up on the ladder that is the defensive spectrum.  Yes, today we break down the five first sackers we shall be seeing most often.

The White Sox received good production from Paul Konerko last season, with the only negative production coming from the offensive drain Mark Kotsay replacing Kong when he needed a rest.  As any baseball fan would expect, the division's first basemen are a powerful bunch.  The three veterans should hit at least 25 homeruns each (with two easily passing 30), while the two younger hitters have shown power potential in the minors.  The current candidates for each team are Kila Ka`aihue for the Royals, Matt LaPorta for the Indians, Miguel Cabrera for the Tigers, Justin Morneau for the Twins, and Paul Konerko for the White Sox.  Continuing my recent trend, we'll start with the two who can already make vacation plans for early October. 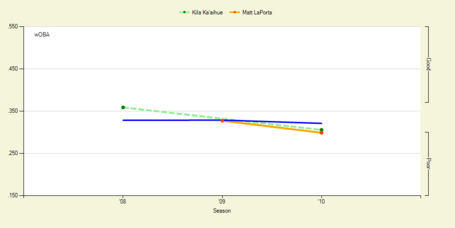 Kansas City: If you couldn't tell from this comically useless comparison graph, Kila Ka`aihue hasn't received very much playing time despite the fact that he will be entering his age 27 season.  Despite posting OBPs above .390 in the minors since 2008, Kila has been stuck in Omaha while Dayton Moore was busy paying Ross Gload, Mike Jacobs, and Ryan Shealy (the former Colorado Rockies version of Kila Ka`aihue) for worse results.  It finally appears that the Hawaiian will get his chance this year, though it will most likely end with him playing for a different team or back in the minors.  Eric Hosmer is coming to Kansas City soon and projects to be a better hitter over the long run.  If given the full season, Ka`aihue could realistically have an OPS slightly above .800 with 20-25 homeruns.  He'll never be a superstar, but the Royals should have been using him the past two seasons instead of overpaying for trash.

Cleveland: Mark Shapiro really seems to have gotten hosed in the CC Sabathia trade.  Matt LaPorta was the key piece in that deal and he hasn't even come close to turning out as planned.  LaPorta absolutely crushes the ball in the minors, as his 4 stints with wOBAs over .400 show.  The problem is that his power seems to abandon him when he is called up, and like our old friend Josh Fields, he cannot hit fastballs.  It's too early to call him a complete bust since he's still just 26; but unless he figures out how to hit the most common pitch in baseball, the odds aren't in his favor.  Onto the big three. 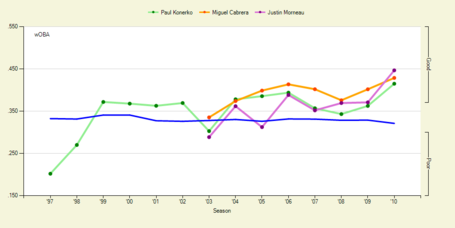 Detroit: Now that is a much prettier graph.  Other than his 2008 season (during which he dealt with various personal issues), Miguel Cabrera hasn't been worth less than 5.5 WAR since before the White Sox won their last World Series.  And now that it appears the chances of Cabrera eating and/or drinking himself out of the majors have passed, Detroit has a potential Hall of Famer in their infield.  Simply put, he's a monster.  Since becoming a full-time starter, he has never hit lower than .292.  His OBP has never been lower than .349.  His lowest SLG?  .512.  The scary part is he is only entering his age 28 season, meaning he is just now in his peak power years.  Cabrera will hit around .320 with a homerun total in the upper 30's with a chance at cracking the 40 homer plateau.  His only negative is his poor defense.  Get used to seeing him, he's signed through 2015.

Minnesota: Here is the unfortunate wild card in the division.  Justin Morneau was destroying American League pitching last season, somehow amassing 5.3 WAR in a mere 81 games.  And then the side of his head was introduced to John McDonald's knee.  Morneau hasn't taken batting practice since.  Obviously, it is to our great advantage if Morneau is not ready to start the season or if he comes back a spectre of his former self, but I hope that isn't the case.  That being said, even if he comes back completely healthy, he has no chance in hell of repeating last season's magic.  No power hitter maintains a .385 BABIP.  An OPS in the around .880 with about 30 homeruns seems perfectly reasonable though.  And he has the plus of actually being good defensively.

Chicago: Kenny and Jerry decided to postpone the farewell for at least another three seasons this winter and it seems more likely than ever that the Captain will retire a White Sox.  Whether or not that sentimentality will bite us in the ass or not remains to be seen.  Paulie had a career year last season and it isn't too often that 34 year old players happen to do that.  While it isn't beyond the realm of possibility that he puts up numbers similar to last summer's, it is highly unlikely.  Expect his final numbers to fall in with his career .850ish OPS and 25-33 homeruns.  And while he may lack range, few first basemen are better at scooping up low and short throws than Paul Konerko.

Conclusion: Miguel Cabrera is easily the best first basemen of the five.  Morneau comes in at second, assuming he can play this year.  Paul Konerko's dependability and the fact that the remaining players are unproven at best land him the third spot.  Personally, I like Kila Ka`aihue more than Matt LaPorta.  I simply think he has a better chance of his minor league numbers translating to the bigs, though I will be happy if I never have to type his last name again.  The next time any rival SBN blogger bitches about typing "Mark Buehrle", they deserve to spend the rest of the day typing Kila Ka`aihue in Comic Sans.