Share All sharing options for: Atonement: Looking at the AL Central Center Fielders

A mere four days from now, the White Sox play their first spring training game of the 2011 season against the Los Angeles Dodgers.  We are passing the preseason milestones by the wayside rapidly.  This series reaches its midpoint with this week's edition.  The past two weeks covered the corners, and today we move to the middle.  With the exception of the Tigers' Austin Jackson, center field in the AL Central is rife with players trying to recapture past glory.  Alex Rios, Melky Cabrera, Grady Sizemore, and Denard Span have all suffered from sub-par seasons over the past few when compared to what they've accomplished in the past.

Which players out of the five will rise up and establish recent trends as flukes, and which will continue their descent to the bench? 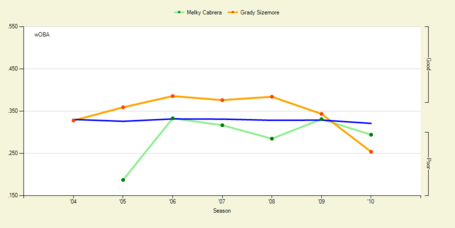 Kansas City: Melky Cabrera did not have good numbers in his single season in the National League.  He never had much of a peak, but at least he had contributed positive value to his teams.  His -1.2 WAR almost cost the Braves the NL Wild Card.  That did not deter Dayton Moore from bringing him to the Royals to be a placeholder.  It feels like a waste though, as Lorenzo Cain could give them at worst the same production, with better defense and baserunning (and for about $800,000 less).  Melky plays below average defense at all three outfield positions, and is unsurprisingly worst in center field.  He doesn't walk or strikeout much and has struggled with changeups almost every year of his career.  Cabrera has very little power and will most likely not reach double digit homeruns.  There really isn't anything to like and it shouldn't be too long before Cain displaces Cabrera in front of that giant crown-covered jumbotron.

Cleveland: No player in this group has fallen quite as hard or far as the former future face of the Indian's franchise Grady Sizemore has since 2008.  Sizemore put together a 30-30 season and had earned an All-Star nod, a Gold Glove, and a Silver Slugger for his efforts.  He led the American League in WAR with 7.1 while playing for a .500 team.  He struggled with elbow, groin, and abdomen issues throughout 2009, eventually undergoing surgery for the latter two complications.  Grady was poised for a big comeback year in 2010, but instead proved to be wholly ineffective before requiring microfracture surgery on his left knee after 33 games, managing a career low .211/.271/.289 batting line.  Having an entire year to heal should help Sizemore rebound somewhat.  He'll likely never be the same player he was before his two year battle with Mark Prior Disease, but a 20-20 season with average defense wouldn't be shocking and would look great on a team with only Carlos Santana and Shin-Soo Choo looking like bright spots. 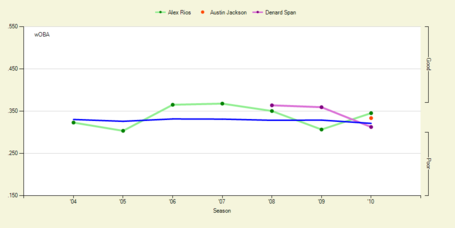 Detroit: Austin Jackson came over to the Tigers by way of the Yankees in the massive Curtis Granderson trade of last winter.  Jackson had been one of the Yankees' top prospects for quite some time, and lived up to all that promise and potential last season in Motown.  Despite striking out in 27.5% of his AB, Jackson managed a .293/.345/.400 batting line thanks in large part to an obscenely high .396 BABIP.  For comparison's sake, Ichiro Suzuki has a career BABIP of .357 and has only had a BABIP at or higher than .396 once in his career.  What does this mean for the might A-Jax?  REGRESSION!  Jackson strikes out more than Prince Fielder and does so without the massive power and walks.  Jackson will not reach double digits in homeruns, though he will hit his fair share of doubles.  He also possesses great speed which he uses superbly on defense and the basepaths.  Until Jackson cuts down on his strikeouts, he'll top out as just an average player (which isn't bad for how much he costs).

Minnesota: Maybe hitting his mom in the face with a foul ball got to him, because Denard Span was not the same player the Twins had counted on the previous two seasons.  Span's solid BB% dipped down to merely okay, and what little power he did have seemed to abandon him.  He accrued the same 2.9 WAR as he did in his 2008 season, despite having almost nearly 300 more PA.  So what happened?  Some bad luck.  His BABIP sunk below .300 for the first time in his career and a few fly balls died on the warning track in the cold Minnesota air instead of carrying over the wall as they did in the Metrodome.  Span still played above-average defense and stole 26 bases at an impressive 87% efficiency clip.  Expect something just a little bit below his 2009 performance from Denard this season.

Chicago: Has Alex Rios finally come back from the abyss?  Rios rebounded from a horrific 2009 season by hitting 21 homeruns and stealing a career high 34 bases in 2010.  He also contributed above-average defense.  So what is there to worry about?  How about a career number of 6.5% for BB%?  One would also be remiss to overlook the fact that his first half (.878 OPS) was much better than his second (.684).  He's been worse in the second half for his entire career, but not that bad.  It's definitely worrisome, but it being spring and all, optimism!  Expect last year's numbers again from Rios this season, with potential for a slight uptick now that we have a real DH to improve the offense.

Conclusions: If Grady Sizemore can get back to the player he once was, he'll be on top.  Unfortunately for him, this isn't the year he ranks there.  Alex Rios edges out Denard Span for the top spot.  Grady comes in at third just ahead of Austin Jackson, as I have much more faith in a healthy Sizemore than a lucky Jackson.  Melky Cabrera finishes in dead last and by a mile.  Since outfielders come in groups, I decided to give a quick recap of how each team's outfield situation appears going into the 2011 season.  The White Sox and the Tigers tie at the top with outfields of Juan Pierre (3), Alex Rios (1), and Carlos Quentin (3) and Ryan Raburn (1), Austin Jackson (4), and Magglio Ordonez (2) respectively.  Cleveland takes the three spot on the strength of better defense and more power in Michael Brantley (5), Grady Sizemore (3) and Shin-Soo Choo (1).  The Twins are in fourth with Delmon Young (4), Denard Span (2), and Michael Cuddyer (4).  And in last (and for the immediate future least) are the Royals with the mediocre outfield trio of Alex Gordon (2), Melky Cabrera (5), and Jeff Francoeur (5).  Salieri would be proud.