Ozzie Guillen probably didn't need to call for Matt Thornton to replace Mark Buehrle until Buehrle found himself in trouble on Monday night, but there was some logic behind it. The situation called for a lefty, Thornton needs to get back on the horse, and Chris Sale hasn't featured sniper-like precision, himself.

As for Buehrle, Guillen pointed to the 99 pitches, noting that his pitch count was by far the highest of any game he'd pitched this year, real or exhibition. The Sox have been good about keeping him healthy, so Guillen deserves some benefit of the doubt.

All that I could understand, if not support. What I didn't get was what happened immediately afterward.

One of the benefits of bringing in Thornton after Buehrle is the completely different look hitters would get. They'd go from Buehrle's assortment of slop to having fastballs jump at them. But Thornton threw Andy LaRoche a changeup with his second pitch, and then after a high fastball, came back with a slider that ended up here: 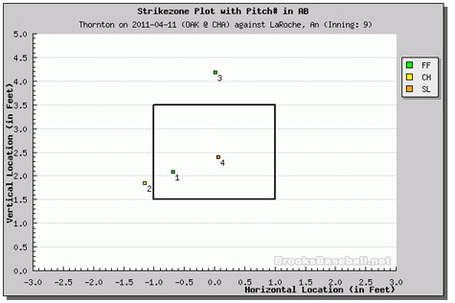 In Thornton's words, that was the "bull---- fourth pitch."

He then started Coco Crisp with a changeup, meaning that the guy who threw 90 percent fastballs the last two years avoided using it in three of four pitches. Twice, he went with a pitch that FanGraphs says he didn't throw once in 2010.

Contrast that to his outing against the Rays, where 29 of his 32 pitches were fastballs, and to me, Thornton looked like a guy who didn't want to get beat the same way twice.

If I have any clue what I'm talking about, that's not a good mode for Thornton to be in, because he needs to like his fastball. He shouldn't like his slider. It's a show-me pitch - something to throw in the dirt, off the plate to lefties, near the shoetops of righties, if A.J. Pierzynski or Ramon Castro thinks the hitters are cheating on the heat. It's not an out pitch otherwise, and LaRoche let him know it.

(And I don't know where the changeup is coming from. A 91-mph changeup seems like a fastball with a "KICK ME" sign on it. Maybe that explains Juan Pierre's defense...)

Thornton needs to throw his fastball, and he needs to locate it better. This has been the problem. Even against Crisp and Daric Barton, his fastballs split the plate. And if you go back to his first blown save against Kansas City, Kila Ka'aihue was able to poke a game-tying single the other way because Thornton left it low. Remember how Josh Fields could catch up to knee-high fastballs and nothing else? Thornton just didn't take advantage of the guy with the slow bat, and Ka'aihue did what he could with it.

Guillen says that he's still not inspired to shake up the bullpen completely, and he's the last guy who can panic about small sample sizes. To his credit, Thornton is answering all the questions, taking all the blame and saying all the right things.

Still, if Guillen can help it, I think it would help to get Thornton back against lefties his next time out. He's the rare guy who needs to get back to being a one-pitch pitcher, and it's easier to be one with the match-up advantage. His command problems are compounded by facing more righties and the defensive lapses. Add those factors with the increased usage of the changeup, and it leads me to believe he might feel more pressure to be a more complete pitcher.

He'll never be one - he just needs to put his fastball in the right spots, and Guillen might have to find different spots for Thornton to work on it.

*On April 11, 2011, Juan Pierre danced with a flyball awkwardly along the warning track before making another costly error. On April 11, 2010, I wrote on Sox Machine about how Pierre seemed very unsure of himself in plays along the foul line and warning track. Pierre overcame the early yips to put together a fine defensive season, so I wouldn't get too wrapped up in his early problems, horribly timed as they may be.

*Mark Buehrle threw about twice as many curveballs as usual to Oakland hitters, and he didn't seem to get burned by it. He threw most of his 19 curves against righties, often grabbing strikes early in the count. It'll be interesting to see if he goes back to the pitch in future starts. Considering he's still having major strikeout issues (only three swinging strikes out of 99 pitches), he's going to need to up the wrinkles in his game.

*Adam Dunn might return Friday. While he looks comfortable in the batting cage, Guillen said he's still experiencing pain when running. Dunn was wearing his batting gloves in the dugout at the end of Monday's game, but Guillen was aware that Oakland was ready for him:

"No, there was a lefty pitcher out there (in the A’s bullpen). He had his gloves on just in case we fight," Ozzie said.