Share All sharing options for: Alex Rios is grounded

When it comes to the ol' "eye test," I think I have a pretty good read on most of the White Sox lineup. At least those members who haven't had an organ removed during their first week in the uniform.

Everybody else has warning signs. Gordon Beckham? He sometimes loads up too much and is tardy on fastballs. Paul Konerko is off when he's hitting grounders; Juan Pierre is the opposite. Brent Morel can't afford to pull off the ball until pitchers stop throwing him low and away. A.J. Pierzynski ... OK, he always looks bad, but he gets in ruts where he gives away even more ABs than usual.

However, there's one guy who never inspires confidence in me, even when he's hitting. That's Alex Rios.

Everything about his approach looks so uncomfortable that I need to drop into Statler and Waldorf to compliment it:

What's your favorite part of Alex Rios' swing?
The end of it! WHOOOOOA-HO-HO-HO-HO-ho-ho-ho....

Seriously, it doesn't look good until it's over. He has a really powerful follow-through, but everything else looks incredibly uneasy. He sits on a barstool with a bad leg, and holds the bat like he's posing for a stock photo. Nothing about him looks balanced or ready.

In order to best get a gauge on him, I find it best to follow his head. It has the tendency to move toward left field before the ball reaches the plate, and it results in a lot of tappers to shortstop or thereabouts. Sure enough, he's off to an uninspiring start, hitting just .212/.281/.288.

Below the jump are some spray charts. One of them is from this month, and the other two are from his best month last year (May, his only month with an OPS above .800) and his worst (September/October). I've removed the dates, so now it's a game!

Answers below the charts: 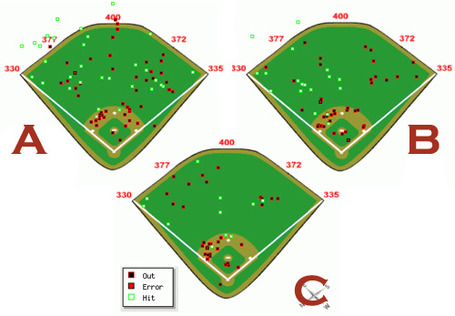 He's pretty much pulling everything this year, much like he did during his fade last season. That's not a bad thing in and of itself, because even at the height of his powers, it's clear that the pull field is his power field. It's the grounders that are bad news.

If you look at his GB/LD/FB splits graph at FanGraphs, you can see Rios start off 2010 with a ton of grounders. Then it takes a big dip in May and the first half of June, only to rise for the bulk of the season's remainder. That correlates surprisingly nicely with his overall production, as he peaked on June 11 of last season.

Much like Larry has been keeping an eye on Paul Konerko's defense, I've had a special concern for Rios' production. He's only just begun the hairy part of his contract (four years, $48 million remaining), and if you extract his May from last season, he hit just .273/.320/.411. He also grounded into 20 of his 21 double plays in this sample, which further underscores the "GROUNDERS BAAAAD!" memo.

But Kenny Williams didn't love 2005 Aaron Rowand enough to not trade him. And then he didn't love him enough to consider giving him more than three years in free agency two years later. Conversely, Williams has loved 2010 Alex Rios to sign him to an expensive four-year deal, essentially.

I'm not pulling the alarms on Rios yet, but seeing him start his 2011 campaign with grounders more than half the time has caused me to raise one eyebrow.

(FYI: My four stages of alarm: 1) One eyebrow 2) Both eyebrows 3) Downturned corner of mouth 4) Full-blown grimace. Mark Teahen's defense was the last to reach Level Four.)

Fortunately, Rios plays good defense at a premium position, Tuesday's drop notwithstanding. I don't have a ton of confidence in him otherwise, starting with his awkward, precarious stance and ending with yet another grounder just left of second. It seems to me that we're in for a lot more of this until he consistently - and literally - keeps his head in the game.