Danks will have to help himself

Share All sharing options for: Danks will have to help himself 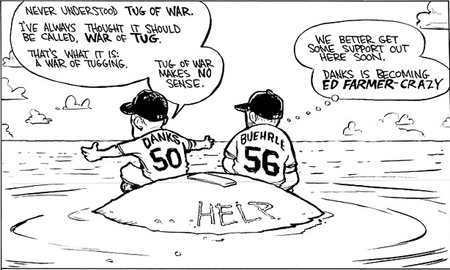 As Lou Piniella might say, LOOK -- we know John Danks doesn't know how to win. After Sunday's loss dropped him to 0-3 on the season, it's progressed beyond a cute theory and is now ironclad fact. I'll call it Jaw's Law, put my feet up and await my millions from Science.

However, there's a recurring theme in the way he sidesteps victory, and it's an inability to finish his day of work.

The Tigers dinged him up for three hits and two runs, all after two outs, to push the game from one insurmountable margin (1-0) to another (3-0). The same thing happened to him in his first start against Cleveland, when Orlando Cabrera hit a two-run homer to give the Indians a 2-1 lead. Likewise on April 8, the Rays tagged him for two runs in the sixth, and he left the game after loading the bases to start the seventh. Jesse Crain saved his ERA that night with a nice escape.

Probably by no coincidence, Danks was approaching 100 pitches in each of those sixth innings, so you can divide it up any way you like. Triple-slash lines below the jump.

Six of the 12 runs on Danks' tab have crossed the plate in the sixth. Moreover, six of his nine unintentional walks, and one of his two plunked batters, have come in the sixth inning and later. That's not a problem unique to Danks compared to most pitchers, but none of his rotationmates can claim the same so far this season. Gavin Floyd and Mark Buehrle are toughening up as their starts are winding down. Edwin Jackson, true to form, offers no clue as to when he'll founder.

Normally, this wouldn't be worth much of a mention, but it's getting his goat, too. Danks is a fine pitcher who has been good enough this season, but I'm wondering how he can actually, you know, reap rewards for his efforts. His only weakness is a tendency to get bogged down by long at-bats. Opponents have dragged him down in every other start this season, so if Ozzie Guillen wants to get him off the schneid, he might need a shorter leash as that pitch count hits the 80s.

That, or he needs to get his offense to actually score runs, and his bullpen to hold a lead. Hey, does anybody have Anthony Young's number?

Let's resume placing the blame where it truly belongs.

*It isn't April unless Greg Walker is justifying his existence. He says the "scuffles" are "way overblown," while Guillen shrugged it off, issuing the defense that the coaches are only as good as the players.

*That said, Guillen is also saying, "Nothing works." If that keeps up, something's gotta give, right?

*Guillen is well aware that Alex Rios' play in center field is on par with his bat.

*Oral Sox has a new podcast up, and James also reviews the events of the week. They're both equally rosy.

*Jake Peavy felt good after his 40-pitch side session, and is set to get his rehab schedule back on track. He also joined the media pack and grilled Danks about his two walks in the postgame interview.

*Kenny Williams will be in New York to answer any and all questions today. This should be a good gauge on the events of the last fortnight.