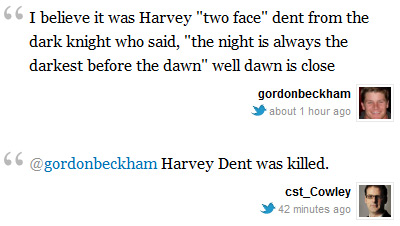 Gordon Beckham couldn't possibly end his month -- or his team's month, for that matter -- on a more poetic note. Every time I think he's hit bottom offensively, he finds a way to reveal a new facet of his despair. On Saturday night, he was late on a fastball right down the middle. Later on, he struck out by swinging on a slider that was already in the catcher's mitt, after starting the at-bat with a bunt attempt that fell just short of the first base coach's box.

So it figures that Beckham, in an attempt to assuage everybody's concerns, resorts to a metaphor that ultimately ends in death. It's been that kind of season.

Beckham did speak more directly about the matter earlier on Saturday, as Scott Merkin reports:

"I've been through this and I did it all the way until July last year," Beckham said before Saturday's game. "I really don't think that's going to happen again."

Beckham takes solace in the fact that he actually started this season well, hitting .333 in nine games before going into his current slide.

"I started off hitting well this year," said Beckham. "I look back and since July last year, I've had two bad weeks. And those are the two weeks I just had. I look at it like that."

This is entirely possible, of course. The problem is that his struggles are rooted in a recurring issue to a much greater extent, and one that has a haunting precedent in recent White Sox history.

We've talked about Beckham's biggest issue -- he loads up too much, swing gets too long, vulnerable to high fastballs, etc. That's nothing new.

But here's where I had a little revelation this evening. Clicking around on TexasLeaguers.com during the game, I started looking at Beckham's whiff rates on your typical fastball. He entered Saturday's game swinging and missing on 11.8 percent of four-seamers.

When it comes to swinging through fastballs, the first guy I think of is Josh Fields, who could not handle a heater hotter than 92 mph, as long as it was above his knees. Inside half, outside half - it didn't matter. Just throw it down the middle and belt high, and the most he could do with it was foul it back.

In his final year with the Sox, Fields whiffed on 13.7 percent of his fastballs. Beckham's not quite at Fields' level on a straight head-to-head matchup. Relative to his own history, though, he may as well have played quarterback at Georgia.

I broke Beckham's past seven baseball months into three chunks -- when he struggled last year (through July 7), when he bounced back (July 8 through the rest of 2010), and then April of 2011. There's a massive difference in his whiff rates on fastballs:

So if you think he's been wrestling with the fastball more often, your eyes aren't lying. Per FanGraphs, he was 3.6 runs below average against the fastball in 2010. He's already at -3.7 this year.

It's a problem best reflected in his infield fly ball rate. In his first two seasons, he's hovered around 12 percent. This year? A whopping 27.3 percent of his batted balls are pop-ups. In fact, no American Leaguer has hit more of them so far this season. When Crede Specials account for a quarter of the balls in play, BABIP can take the month off. You deserve any bad luck you get.

Identifying the problem is a helluva lot easier than predicting a feasible solution.

The obvious place to start is a multiple-game benching or two. His 2010 season took a turn for the better after he watched Brent Lillibridge take his place for three games in a row in early July. Now, that could very well be coincidence (a couple of earlier back-to-back off-days didn't help), but Ozzie Guillen may as well begin with retracing his steps from Beckham's previous renaissance.

The lack of suitable substitutions complicate more drastic moves. In theory, the Sox could demote Beckham in favor of a platoon featuring Lillibridge and Omar Vizquel. The BrOmar Hybrid probably couldn't contribute less to the offense than Beckham in his current form, even if they wanted to.

But they wouldn't offer much more, not nearly enough to offset the possibility of Beckham conquering his own problems, delivering big when dawn comes. A demotion is a complete unknown, as Beckham has only moved up in the White Sox organization. They might have to wait until they're 15 games back at the All-Star break to consider that severe of a public admonishment.

It's a delicate situation, and those always suck. They're even more frustrating when the team as a whole is begging for somebody to drive a sledge hammer through its skull. Alas, this is one case where the Sox have to dance with whom they brought, and Beckham's a very high-maintenance date.