How long can this go Juan?

Share All sharing options for: How long can this go Juan? 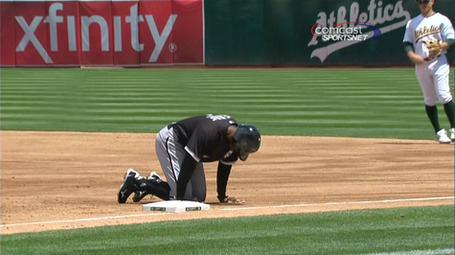 By some measures, Juan Pierre didn't have his worst game of the season during the White Sox's 4-3 victory over the Oakland A's. Technically, he could have hurt the Sox more. He did have a single, and he didn't commit an error. So he's got that going for him, which is nice.

But while Win Probability Added (more on that below) might say Pierre's had uglier days, I think that nonsentient stat is actually being kind. WPA doesn't take into account the cumulative toll Pierre's game has taken on everybody in and around the White Sox organization.

His performance on Sunday was just one gut punch after another. He committed six outs over four trips to the plate, and that doesn't even capture how problematic his day actually was. Drilling down:

Even the routine flyball that ended the eighth inning proved to be adventure. Hawk Harrelson identified the play as a "can of corn ... hopefully." On Twitter, Mark Gonzales said Pierre "called for the fair catch."

At this point, Ozzie Guillen might be the only guy who has faith in Juan Pierre. And that includes Juan Pierre.

Guillen went to bat for the guy nobody wants to see come to the plate after Sunday's game:

"One thing about Juan, you’re going to see the same one tomorrow," manager Ozzie Guillen said. "He’s going to go out and play the game, and play the game right. When you play every day, you’re going to go through a tough time. He’ll be there batting first again. I don’t worry about him because he’s a professional. He will battle. That’s not the first time he’s gone through it and he will find a way."

Now, when it comes to struggling players, there's only so much Guillen can say. Look at how he talked about A.J. Pierzynski's throwing woes -- he could place the blame squarely on Pierzynski, but whom would that benefit? Immanuel Kant, maybe, but he's been dead for a couple hundred years.

This particular defense of Pierre runs the risk of being drastically tone-deaf, especially since the White Sox begin a homestand tonight and Guillen is aware of how poorly his team has played in front of its fans. I mean...

It's frustrating on a number of levels, mostly because if Pierre were a rookie, Guillen probably would have lit into him at least once this season. Certain veterans have a cache of respect, and Pierre is using his to its fullest extent.

Even though Guillen remains adamant in his support, I have the feeling this homestand could change things if things don't change.

When it comes to paying White Sox fans, Pierre's reserves of respect ran dry long ago. They let him hear Bronx cheers for every routine play after his cluster of early-season Pierrors, and they can't even muster fake enthusiasm for anything he does at the plate. Pierre's work ethic and preparation mean less and less as the games go by.

Even though I respect Pierre the person, he can only be judged on results right now. The Sox are paying him $5 million to be the least productive player in the league, and he's failing at the fundamentals in all three facets of the game. And there he is, getting more opportunities to come to the plate than anybody else on the team.

The situation reminds me of the ill-fated Dewayne Wise: Leadoff Man pilot in the 2009 season. Wise was booed on Opening Day for botching two sacrifice bunt attempts, and booed even louder the following day, when he popped up another bunt attempt and later struck out.

The outpouring of dissatisfaction was surprising in its ferocity. Nothing about Wise seemed eminently disdainful. In fact, he had made the most of his big opportunity the previous season, and he played well in the postseason. Usually, crowds place too much faith in the immediately productive journeyman, because the average fan doesn't pay that much attention to minor-league track records.

Not this time. For whatever reason, White Sox fans knew that Wise wasn't what a leadoff man looked like, and they let Wise and Guillen know it the moment he faltered. Guillen put him out of harm's way after that second game, dropping him from first to eighth in the order. The negative energy simply benefited nobody.

If Pierre can't get out of his crevasse ("rut" seems like a vast understatement) at home, we could see Guillen change his mind fairly quickly. Everybody is waiting for him to fail, and he has no margin for error. Even coming up short on difficult plays will be held against him, because he's not making up for the routine plays he botched earlier.

Here's my burning question: How would Guillen have responded if Pierre had put on his Sunday Spectacular at U.S. Cellular Field instead of Overstock.com (still makes me laugh) Coliseum?

Really, he couldn't have arranged his day any better in terms of pissing off a crowd. He greeted the fans with a friendly handshake (the leadoff single) masking a joy buzzer (the pickoff). Throw in two double plays, two missed bunts, and a failure to score a runner on third, and by the end, you could eat the contempt with a fork. It would be that thick.

After hearing the public sentiment, could Guillen go to the media and tell the fans, "You're going to see the same one tomorrow," and say it as if it were a good thing? Maybe I'm naive, but I don't think his defense would be nearly as reassuring.

Mark Teahen's status clouds the picture further. Right now, the only saving grace for Pierre is the lack of a surefire improvement. Amazingly, nobody on the 25-man roster guarantees an upgrade, sadly.

That could change today, should Teahen's strained oblique force him to the disabled list. Presumptively, Dayan Viciedo would take Teahen's place, finally giving Guillen a dynamic corner outfield option to take some of Pierre's playing time. The fans will let him know it, too. Could Guillen continue to turn a blind eye to Pierre's siphoning effect, with so much evidence to the contrary?

Maybe I'm placing too much faith in Guillen, but I think the Cell's unfriendly confines could change his tune if Pierre's production holds at its current level.

Ironically, if the worst-case scenario continues to play out, Pierre might not have to worry about being his team's biggest liability, because his manager would be fighting him for the title.

Making six outs in four at-bats -- including a pair of double plays with a runner in scoring position -- only resulted in Pierre's third-worst game according to Win Probability Added.

If you're unfamiliar with WPA, it basically measures what a player brings to/takes off the table in a given game, with more weight given to clutch situations.

So in which games did Pierre fare the worst?