Man, the number of HR I watch keeps going up.  This time was a matter of frustration with what I was seeing.  In part it was because Carlos has hit out an inordinate number of ugly mistakes compared to Paulie and Alexei.  I'm not sure if that's because he's had more opportunities or just that he's made good on the same few he's gotten.  Either way, it's just not that informative.  I know for a fact KenWo* could have gone yard on the slider** Holland threw to Quentin.

The other frustrating bit in watching Q! swing the bat is actually watching him do it.  I feel like I have an understanding of how Paulie and Alexei do what they do.  While both swings are different, they're free of excess.   The adjective that comes to mind is "natural".

Baseball's contrived as much as any sport, so the concept of a swing being natural is a little weird.  Of course, we use it anyway.  Hell it's the title of a movie.  Because that's what natural is in sports.  "Natural" in sports almost always refers to something in the way of pure unconscious; it's a kind of perfection exactly because we're not thinking about it.  And that's Carlos' problem right there.  Maybe "thinker" isn't the right word and "brooder" comes closer, but he doesn't give the impression of someone who can just let it all go.  He can't just be and he can't just do.

He's similar in this sense to Paulie earlier in his career.  But now PK seems so zen.  So out of mind.  So good that he can tap into that secret vein, that swing that every 12 year old sees in his mind's eye as he's lacing it back up the middle, just like you're supposed to.  I wouldn't argue that either Konerko or Alexei or AJ have taken on this platonic form, but they have access to it.  They've adapted it, taken their flaws and shaped it around that ur-swing.

Not Carlos.  To me, he's always looked like he's fighting, pounding away at round pegs until they're a hell of a lot more square.  To me, Carlos' swing is his impossibly contorted back foot, mashed outward in a half-waddle toward some obscure end. Everything ugly, but him so strong that it might not matter.  But so I got to 10 homers and I kept going, not sure what I was waiting to see.  Eventually, I got to his shot off Tyler Chatwood, the Angels' pretty good really young righty: 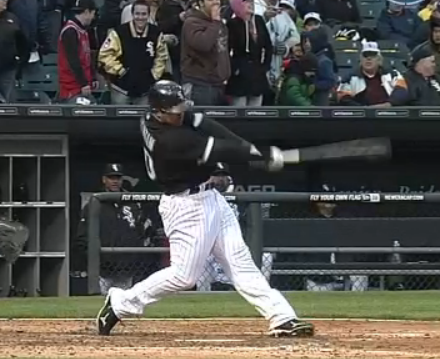 So this is what I see that's changed.  The beginning of the thing is still weird.  His top hand still totally disengages from the bat right before he loads up.  But instead of staying weird and forced and twisted into knots, he's starting to unwind and tap in.  I might even suggest that Greg Walker has taught him a thing or two.  Because last year, he looked like this: 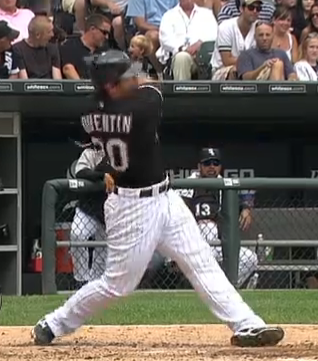 He hit a home run like that.  He used to hit all of his home runs like that.  I'm not saying he's a totally changed player, but there's a more than significant difference there.  I'll go on about the difference, but I think the pictures say it all.  The reason we all have more or less the same idea of what a good swing looks like is because there are only so many ways for the human body to efficiently work with (and against) the laws of physics when it comes to hitting a round ball with a round stick.

So what changed?  It is reasonable to think Walk had something to do with it. But knowing Q, he actually went back and read the Principia.  Hell, knowing Q he probably went to London to read an archival copy.  Hell, knowing Q, he probably demanded the temporary suspension of the laws detailed therein so he could travel back in time to talk with Sir Isaac just to get in touch with a kindred curmudgeonly spirit and really understand the whole thing from the beginning.  Maybe he'd never heard of the apple story.

Yeah but so that's what I think is different between this year and years previous.  I think when you're fighting yourself and major league pitchers figure out your weaknesses, adapting is all the more difficult.  And that repeating the same swing consistently is all the more difficult.  He could simplify and smooth out further still, but so far there's been a big difference.  All of a sudden he's got a chance on that slider away again.  Here's the play by play on the HR:

So like I said, the sliders he's hit for bombs aren't crazy great pitches for the most part.  But I was still surprised at what he did with them.  My recollection, formed by some serious rough patches in '09 and '10, was just being lost on that pitch against righties.  The data backs it up.

Which is not to say that he's suddenly impossible to get out.  The pitchers here still had a pretty consistent approach.  If you can avoid the portion of the zone from the middle to the inside corner from the top of his shin to his belt with the fastball, you'll be okay.  There was an obvious attempt to move the fastball from low and away to up and in.  I've seen him roll over the fastball away and pop up or whiff on the fastball up and in enough to agree with the in-and-out approach.  It's necessary: he's so strong that he can take any pitch that he's looking for out of any part of the ballpark.

So, like with Konerko, command is at a real premium.  It really doesn't matter how hard you throw.  That 100 mph fastball Verlander threw was thisclose to parked.  As it was, he took two other heaters deep in pretty much the same spot.  The thing I like about Verlander's approach is that he figured if he was gonna miss, he'd miss up.  It didn't work, but I think the mentality is right.

He's still vulnerable to the slider, but his recognition is better than in years past.  I think this is largely because he's more comfortable at the plate.  He's thinking less, so he's processing information faster.  Despite his career reverse splits, lefties are definitely at a disadvantage.  The change isn't as problematic for him as the slider and odds are you're throwing slower and at a worse angle.  If you have enough confidence in the change, you can probably do okay just because you'll be able to stay off the fastball enough to mess up his timing.  But still, it's all about command.  Make pitches and he's still prone to getting himself out on weak contact.  Make a mistake and there aren't many in the league who can hit them farther.

*As I was watching the replay, I could actually hear KenWo's voice in my head.  "Holland's a total jag.  I coulda jacked that while writing a behavioral disciplinary infraction, drinking 3 Bud Light Limes and changing a diaper."  Which reminds me: we never should have invited him to the meet up.

**For lack of a better term.  Or in order to avoid a more vulgar one, rather.  What a piece of shit.