Last August, Jim Thome delivered layers of pain to the White Sox with one swing of the bat. With his Minnesota Twins trailing by one in the 10th inning, Thome hit a two-run blast off Matt Thornton. Not only did he deal a blow to his former team's postseason hopes, but it was also the first walk-off homer in Target Field history.

As painful as it was to watch unfold in real time, the White Sox deserved to have their faces rubbed in a decision that was doomed from the beginning. They bypassed a proven producer in Thome in favor of the rotating DH, which didn't even work on paper when giving more than a few seconds of thought. That decision came to bite them all season long, with Thome -- a luxury for Minnesota's roster -- ably replacing the concussed Justin Morneau and handily outproducing Mark Kotsay and Co. The homer symbolized an entire year's worth of problems in roughly 10 seconds.

Dan Hudson's complete-game victory over Edwin Jackson and the White Sox took a little longer, but the result was the same -- a thorough undressing of the White Sox and their ill-conceived decision-making, contained in the tidy package of one ballgame. Going forward, we can point to this game as the problem with that trade, and nothing more needs to be said.

The baseball gods even made sure Hudson would face the guy for whom the Sox traded him. Jackson had been scheduled to start the series finale against the Minnesota Twins on Thursday, but a Tuesday rainout pushed all the starters back a day, setting up this epic matchup.

Sure, Hudson could have defeated original Friday starter John Danks, and that would have proved the same point. But when Hudson clearly outperformed Jackson in a head-to-head matchup, it effectively closed the book on any further rationalization.

In order for the trade to make sense, Jackson had to outperform Hudson in 2011 by a significant margin. Instead, Hudson had everything in his favor. A better team record. A better personal record. A better ERA. Better peripherals. And he's making $8 million less in 2011. And he's under team control for several years afterward.

This being the case, the only way the Sox could even begin to save face was by thrashing Hudson behind a well-pitched game by Jackson. They accomplished neither. Instead, Hudson embarrassed the White Sox organization from the top down.

The White Sox had their reasons to bail on Hudson after just 34 1/3 innings with the Sox. They thought he didn't have a strong enough third pitch, and that would be his undoing in the American League. He went from throwing strikes in Triple-A to pitching nervously in the big leagues, and even Hudson will admit to that.

But he was never given a fair shot. The Sox expected him to be a steady presence in the rotation after selecting him in the fifth-round two years prior. Trade rumors surfaced after a shaky first start in his first chance to replace Jake Peavy, and they nagged him until the Sox finally sent him to Arizona with David Holmberg for Jackson. The trade gave Hudson peace of mind, and he began pitching better immediately. That is no exaggeration - he threw eight innings of one-run ball in his D-Back debut.

Hudson crossed the 180-inning mark in his Arizona career after Friday night. Here's what he has done after 26 starts:

It's not like Hudson blossomed years down the road after lots of different pitching coaches and epiphanies -- he turned the corner after one start, and outside of a rough April, he hasn't let up. The Sox are left holding the bag, and all of their possible excuses make them look worse. Let's go through them.

*Hudson had a fifth starter/middle relief ceiling. That's what Joe Cowley said the Sox privately thought immediately after the trade. Hudson's performance since makes that notion of mid-leverage relief simply laughable, if there was any merit behind it.

(And Scott Merkin tweeted on Friday that "the Sox never doubted he would be a quality starter." Which one's worse? I can't tell anymore.)

*Hudson only had two pitches. So does Jackson. Even though he can reach 98 with his fastball, nobody seems to have problems picking it up, and his slider isn't reliable, either.

*Hudson doesn't a breaking ball. Here's a new wrinkle in his game -- he compensated by using his changeup aggressively against right-handed hitters, including 21 of them to righties on Friday night. He threw them to get first strikes, and he threw them in full counts, and he was never burned by it.

He's throwing the slider more, too. He threw 22 against the White Sox on Friday. He threw only seven of them in his final start with the Sox. He grabbed 16 strikes with his slider, so even if it never has true strikeout potential, he already has enough to succeed to some degree.

Aside from the rookie jitters, personality doesn't seem to factor in, either. Merkin and Mark Gonzales both vouched for his character on Twitter as he mowed down the Sox.

(And Williams doesn't even benefit from the idea that Mike Rizzo and the Washington Nationals reneged on a deal to trade Jackson for Adam Dunn, because acquiring a half-season of Dunn for Hudson and Holmberg makes even less sense than acquiring a year and a half of Jackson. There would still be a massive hole in the rotation.)

Basically, every door in this rationalization maze leads to death, which probably makes it the worst trade Williams has ever made. It doesn't even matter if Hudson fizzles out (I don't think he will), because it was supposed to pay dividends now, and it's not even close.  They took on a huge amount of money with Jackson with only a year and a half window to reap any rewards. Now, it looks like they got the worse contract and no real improvement in return for their best two pitching prospects.

There's just no redeeming value. Hell, even the second Nick Swisher trade can be justified a small amount by the personality clash and the fact that they saved money.

At this point, the White Sox are reduced to hoping that Jackson capitalizes on untapped reserves of potential. That isn't likely to happen. Likewise, we're reduced to hoping that Hudson's complete game serves as smelling salts for the White Sox front office. The Hudson-Jackson trade was a desperation move in the face of imposing odds, and as it stands now, Williams may find himself compelled do something, anything once again to salvage his "all in " approach. If the decision-makers haven't been humbled by these gut-punch games over the last two seasons, I'd then start bracing for what next year has in store.

Afterword: While going through the posts from last year, I found this depiction of the trade by the late, great thecip. Keep in mind, it was posted within hours of the trade. 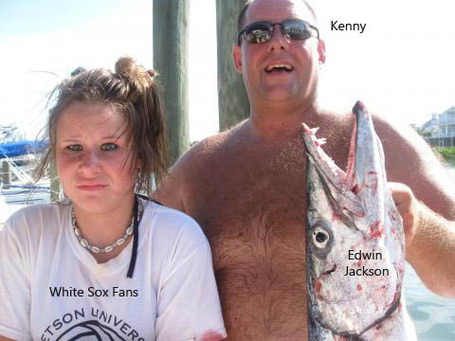