Reading Room: Hall of an exhibit, and Konerko wants in

Share All sharing options for: Reading Room: Hall of an exhibit, and Konerko wants in

I spent Tuesday evening in Cooperstown at the Hall of Fame with a couple of friends (thanks to HSA and Colin for filling in), which gave me the opportunity to visit the new "One for the Books" exhibit.

I left wishing I were a little more prepared.

The Hall of Fame used to have a room that featured the trophies won in the respective fields, with an annually updated board reflecting the all-time and active leaders for the given category. Now, it's beefed up with Baseball-Reference.com's backing.

The coolest part of the exhibit is the touch-screen record book, which allows you to view the all-time and current leaders for numerous statistical categories. That's easy enough to look up on the ol' B-Ref (I can call it that -- we're tight), but it goes a few steps beyond that.

You can also sort by position, which is a little harder to do from here. And the game-changer for me -- there's a timeline at the bottom that allows you to see what the all-time lists looked like at any year. That's incredibly useful information when trying to get an idea of a player's legacy, and I've never seen an easier way to parse it.

Except for the whole part about driving to Cooperstown, at least. The only problem was that I had no era-specific questions on the top of my mind. The next time I make the trip, I'll have to bring a list. There's a closer, crappy cell-phone picture of the screen below the jump, along with your links for the day. 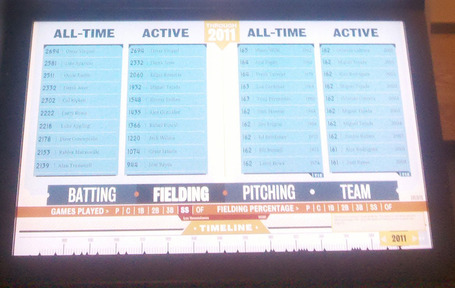 Paul Konerko homered in his fifth consecutive game, this one leading off the second inning against Matt Garza.

You might want to sit down before looking at Konerko's June stats -- he's hitting .433/.500/1.000 over 60 at-bats. And with this last homer, his OPS now crossed the 1.000 barrier. And if you're wondering, Dale Long, Ken Griffey Jr. and Don Mattingly share the major-league record for consecutive games with a homer with eight.

With Jake Peavy set to take the mound on Wednesday, Lucas Harrell was the obvious odd man out. He had pitched just one full inning (over two games) since being recalled to Chicago on June 8. Once again, though, the bullpen is without a real long man, meaning that everybody should get used to Brian Bruney's Bluto beard. At least until Tony Pena comes back.

The other roster move -- which would theoretically make room for Dayan Viciedo at some point in, say, a fortnight -- isn't as clear, and Ozzie Guillen emphatically defended hot seat occupant Juan Pierre on Tuesday:

When the suggestion was made that Juan Pierre is the player who would need to be sacrificed to get Viciedo into the lineup, you could see the hairs bristle up on the jefe’s neck.

"You think Juan is the problem? He has better numbers than a lot of people here," Guillen said, before reiterating that he’s happy with the roster he has.

If Guillen is truly genuine about his public perception of Pierre, this might make for interesting drama down the road. If you're clashing with your general manager while appealing to the owner for a long-term financial commitment .. well, I don't think Pierre is the kind of player you'd want to stake your professional reputation to. If I were Guillen, I'd draw more attention to:

The starting pitchers, as Guillen's management of them has been the kind of inventive and perceptive problem-solving that he seems unwilling to show with the leadoff spot. Of course, the six-man rotation is merely the Antonio Alfonseca of pitching staffs until the Sox adhere to the primary purpose of the project in keeping Jake Peavy healthy. There really are no excuses, since Peavy is a big fan of the extra man.