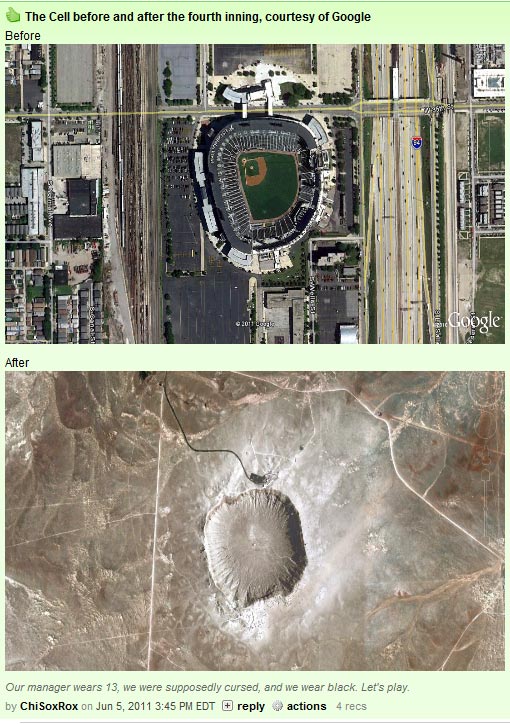 This comment in the gamethread basically sums up the afternoon of action, but I'll put some words to it.

Jake Peavy carved up the Detroit lineup his first time through, retiring all nine batters, four via the strikeout. The next time through, he gave up six runs on three hits and three walks -- and all of those came in the fourth inning.

Hawk Harrelson will have you believe that Alexei Ramirez's ERA should suffer. After all, Ramirez should have turned the 3-6-3 double play that would given Peavy two outs and nobody on. Still, one out and a runner on first isn't usually the recipe for a six-run inning, so Peavy should at least receive a fraction of the blame.

Command became an issue. He walked two batters to load the bases, and then gave up a deep flyball to Victor Martinez that brought a run home. Topspin was the only reason it wasn't a grand slam, but fans of bases-loaded homers would not be disappointed. After Andy Dirks doubled a run home and Peavy issued his third walk of the inning, Ryan Raburn turned on a first-pitch fastball down the middle and sent it over the White Sox bullpen to give Detroit a 6-2 lead. That took the Sox and the crowd out of it.

Peavy was out of it, too. He was lifted from the game due to a strained right groin, although after his pitch count ballooned to 75 through four innings, I might've removed him regardless, because he was laboring.

Or maybe Juan Pierre deserves some of the blame.

The White Sox had Brad Penny on the ropes early. They jumped ahead 2-0 in the first inning on a Paul Konerko double and a run-scoring wild pitch. In the second, Brent Morel reached with a one-out single, stole second, and moved to third on Pierre's single to left.

Since Morel stole second easily on the combination of Penny and the weak-armed Martinez, Pierre and/or Ozzie Guillen thought that he, too, should be able to run on the Detroit battery. Problem was, Pierre got a terrible jump, and Martinez was able to throw him out at second by a small-but-clear margin. Ramirez grounded out to third, and Penny settled down well enough to last five mediocre innings and qualify for the win.

Back-to-back at-bats by Adam Dunn and Gordon Beckham showed how hittable Penny was. The struggling Dunn missed a homer down the right-field line by a couple feet, before being run up on a terrible called third strike at his shins by Jim Reynolds. That call made Beckham's subsequent homer only a solo-shot, and the Sox could never draw within three.

Most of the fans had left by the time Carlos Quentin put himself in the record books. With two outs in the ninth inning, Quentin was plunked by a Jose Valverde fastball for the 1,000th HBP in U.S. Cellular Field history.