Share All sharing options for: 1947 All-Star Game: Luke Appling at 40

This is the seventh of 10 installments featuring significant White Sox moments from All-Star games past. 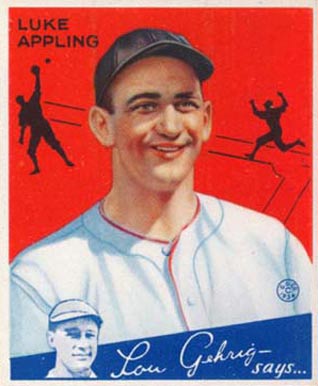 Luke Appling was a hypochondriac of such great renown that he earned the nickname "Old Aches and Pains." I wonder if his perpetual ailments helped prolong his career, because if he never felt all that great as a young man, it's possible that he never noticed the onset of age.

Appling was a seven-time All-Star. He went to his first Midsummer Classic in 1936, when he was 29 and in the middle of a career year. He would go on to win lead the league with a .388 average, which is still a franchise record. He was the first White Sox to win a batting title, and only Frank Thomas has joined him in that group.

Appling didn't start in the 1947 All-Star Game -- Cleveland's Lou Boudreau did -- but he played a big role in the American League's 2-1 victory.

He entered the game with the AL trailing 1-0 as a pinch-hitter for Washington outfielder Buddy Lewis to lead off the sixth. He singled, moved to third on Ted Williams' single, and scored when Joe DiMaggio grounded into a 6-4-3 double play. That tied the game at 1, and that would be it for Appling, who was replaced by Tommy Henrich in right field.

That was the last All-Star Game for Appling, but his career was by no means over. He finished the 1947 season hitting .306/.386/.412, and then went on to enjoy two more fine seasons. As an everyday shortstop at age 43, Appling hit .301 and drew a whopping 121 walks to 24 strikeouts. Power-hitting shortstops Eddie Joost and Vern Stephens got the nod that year.

Appling went 4-for-9 over his All-Star Game appearances, but that doesn't include his finest performance in an exhibition game. That would be 1982, when a 75-year-old Appling took Warren Spahn deep in an Old Timer's Game at RFK Stadium (video here).