Gordon's Leg Explains It All

Share All sharing options for: Gordon's Leg Explains It All

One of the surprising outcomes--to me anyway; thought you guys were a bunch of homers-- of the SSS community projections turned out to be our collective opinion of Gordon Beckham as a hitter.  A bit above average is what we said he'd be.  That seemed very fair--the hitter we saw in 2010 slumped tremendously, but seemed to figure it out before going down to injury before season's end.  The 2009 version excited but really expecting all that was too much.  Somewhere in the middle, but leaning toward '09 rather than '10.

Instead, here we are: Gordy's line on the year is .255/.312/.364, nearly indistinguishable from the slump-plagued previous year we all thought wasn't really him.  At this point he's been less than a league average hitter for his career and it's not really clear where he's going from here.  After a miserable June, he's posted a good July, but it's been almost all batting average fueled.  He's not taking walks.  He's not hitting home runs or doubles.  He's striking out more than he ever has.  The obvious question: what's changed?

For one, plate discipline.  His walk rate has plummeted from the '09 campaign where he drew nearly a walk every 10 trips to the plate.  Now it's every 20.  Which, maybe that wouldn't be a big deal.  Swinging more in itself doesn't have to be a bad thing so long as you compensate by making something happen when you do.  Except he's swinging at the same number of strikes he always has.  He's not swinging more at good pitches.  He's chasing.

I think this is the primary cause for his struggles this season.  Last season, he didn't really have this issue.  He was swinging a bit more at pitches outside the zone...but so was the rest of the league.*  Last season, I think he had a different problem altogether, namely his swing got longer.  While I think he's struggled with it somewhat this season, it seems to be nearing where he was in '09.  E.g: 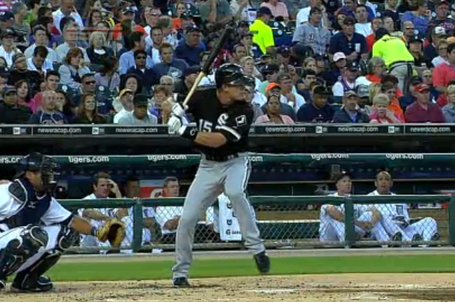 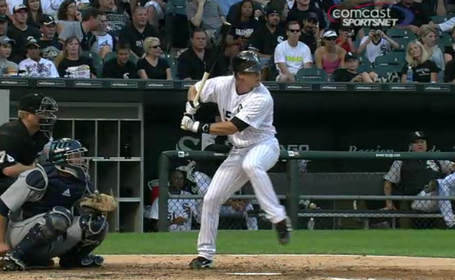 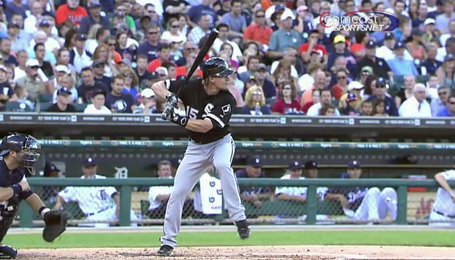 I did my best to take these screenshots at the peak of his leg kick.  But so I think it's clear that his load got sloppy in 2009.  The clutch he takes to load his hands had a larger circumference, his kick was more exaggerated and (I'm less confident on this point) he turned and closed his swing more.  All of this takes more time and introduces more variance into the swing.  More variance, more things that can go wrong, more swinging and missing and worse results when you do make contact.

Flash forward to this season and, I'm guessing, he's spent this season working on his muscle memory to kick the bad habits.  And that leads to thinking about mechanics while you're at the plate.  Even if it's not happening all the time, it's about the worst thing you can do if you want to succeed at hitting a baseball.  If he had the same swing, over-thinking and over-excitement could definitely drive a young hitter into chasing way too much.

So that's my working hypothesis.  Obviously, it's basically impossible to watch enough tape to really reconstruct what happened over a full season.  For the back seasons in question, I charted the July 25-27 '09 games and July 27-29 '10 games**.  That means that big leg kick was in full effect as of late July, which you might remember was the beginning of his hot streak.  I'm not sure if he just figured his timing out with that kick and tried to reform the swing over the winter and into this season.  I'm not sure if it lasted through August.  I did a quick check of games before and after and it seemed like it was there in both, but it's obviously something that's hard to measure given time constraints.  By definition, this isn't rigorous enough to provide an authoritative conclusion.

As for what it could mean going forward, a lot of it comes down to just how athletic and mentally strong Gordon Beckham turns out to be.  The more reps he needs to get his swing to the point of automaticity, the more likely the environment starts to affect his composure.  He seems to be fairly happy-go-lucky overall to me.  He doesn't take his poor hitting into the field with him (which I don't know you can say about Rios, for instance) and nothing about his old blog or his current choice of entrance music suggests he's a guy who broods or beats himself up.  Cheery optimism can go a long way as long as he's serious enough to put the work in.

As for his athleticism, it's not elite in the majors. He doesn't have bat speed like Viciedo, arm speed like Sergio Santos or foot speed like Brent Lillibridge.  He's certainly well coordinated, but he's probably just around average as far as that goes.  And that means it's going to take all that much more work in order to get things right.  It seems at least he's got the mind for it.

*Offense has declined in pretty much all categories when comparing the last two seasons to the decade that preceded it.  In this particular case, I'm pretty sure pitchers have realized that hitters are less dangerous so they can throw more strikes which means in turn worse counts for hitters which in turn causes them to expand the zone to protect.

**And some random ones from this season for comparison that I didn't chart.  I was mostly just looking for some nice slow-mo on a decent pitcher with the right camera angle.