Share All sharing options for: Kenny Obtains a New Outfielder

"Get me Sandy Alderson on the phone now!" you scream angrily to no one in particular.  There is a palpable sense of dread and terror permeating throughout the room.  Buddy Bell quietly begins to start praying under his breath.  A video screen lowers over the center of the table.  A dark hooded figure with glowing red eyes and the horns of a once majestic stag appears on the screen. 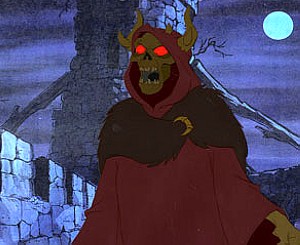 "WHO SUMMONS THE DARK LORD ALDERSON?" a voice that sounds like every nightmare you've ever had dating back to your time in a crib pierces the room, instantly killing every plant and small rodent within 250 feet.  Doug Laumann collapses into a coma from which he is fated to not recover until the Dark Lord Alderson is slain.  Emboldened by your greatness, you swallow the lump that has begun to reside in your throat.

"I have you old bastard.  I come for Carlos Beltran and intend to have him in Chicago by the end of the day."

A menacing laughter echoes between your ears.

"SO BE IT!" booms out the demon before disappearing in a puff of smoke.  A scroll magically unfurls in front of you, proclaiming that Carlos Beltran is now property of the Chicago White Stockings from the New Amsterdam Metropolitans in exchange for the services of Sir Jacob Petricka and young Trayce Thompson.

"Friggin' demons and their needs for dramatics.  Wake me up when Beltran arrives tonight!" you tell your secretary before retiring for some much needed shut eye.

You awaken to the reserved tones of your secretary.  You notice she is now strangely dressed in all black.  For some reason a hearse is parked in the players' lot.

"Well fuck, I guess we need to give the man some sort of funeral!"