The End of an Era

Share All sharing options for: The End of an Era

In a different world, this is how it would have been all along.  Mark Buehrle had always dreamed of playing for the Cardinals as a young boy.  But the White Sox were the only team who gave a tinker's damn enough to draft him.  And so he put his dreams on hold.  The White Sox rewarded this good faith with millions of dollars and a World Series ring.  But the heart wants what the heart wants.  You can see the longing in his eyes.  Kenny, you think, it's time to set him free.

A sense of trepidation crawls across his face.  "What's up boss?"

"As you can tell, the season isn't quite going how we wanted it to.  We're looking to send some veterans off to some new homes.  We're asking you to waive your 10-5 rights so we can send you home to St. Louis."

"A...are you serious?  It's actually happening?"  The trepidation is gone.  That Mark Buehrle smile begins to shine. 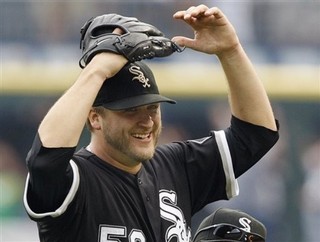 You shake hands like gentlemen, thanking each other for everything.  You thank whatever gods may be that Tony LaRussa hates Colby Rasmus.  All it took to replace Alex Rios in center field was allowing the now-former face of your franchise to live out his dream.  Sometimes we're rewarded for acts of generosity.  Enjoy your new starting center fielder.  He should blossom quite nicely in a real city.