Share All sharing options for: Taking Advantage of Strange Days

The video screen descends.  You dial the number 21.  A black and yellow bridge comes into focus.

"Neal?  What the hell are you doing on the Roberto Clemente Bridge?" 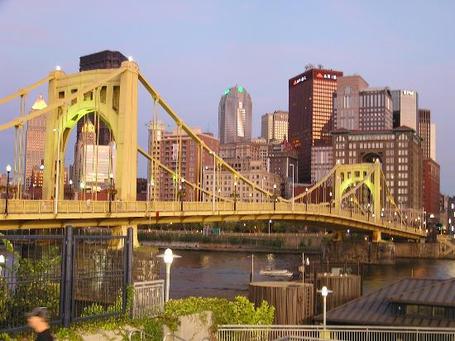 "What?  Oh, hey Kenny!  I'm still getting used to running a winning club.  For the past decade they made the GMs around here do routine bridge maintenance.  I've gotten quite handy at arc welding!  What's up?"

"Actually that's almost what I'm calling about.  I wanted to give you first crack at Edwin Jackson.  You could use another strong starting pitcher to help push you into the post season and we could use some help in farm system.  What do you say?"

"No foolin'?  A real live starting pitcher who has thrown a no-hitter?  We haven't had one of those since '97!  Hot diggity damn!  Let's do it!"

Edwin Jackson went on to help lead the Pirates to their first NLCS since 1992, where they hilariously lost once again in seven games to Atlanta.  Some things cannot change.

Young middle infielder Chase d'Arnaud and injured reliever Evan Meek came over.  Meek proved to be a reliable enough option that Brian Bruney was officially made the new Tony Pena.  d'Arnaud is biding his time in a minor league system where he is the top prospect without a doubt.  His time is near at hand.  Gordon Beckham wakes up to nightmares of his impending replacement.  d'Arnaud abides...