Share All sharing options for: Rios gives a different look

Carlos Quentin hit two homers in Friday night's victory over Minnesota, so it only made sense that Ozzie Guillen sat him in favor of Alex Rios on Saturday.

Well, it only made sense after the fact, when Rios' box score showed two singles, a double and a stolen base. And his box score won't show that he hit a cutoff man on a throw home.

Where the hell has this guy been?

A lot is made of Rios' standing-piano-player stance, but as the saying goes, it's not how you start -- it's how you finish. Rios' problem is that the end of his swing is as feeble as its beginning. His head and body pulled towards third base, meaning that anything on the outer half of the plate would find the end of his bat.

When he hit that double to the left-center gap in the second inning, that was the kind of contact Rios failed to make for weeks. Same thing when he blistered that single up the middle. His third hit was an inside-out blooper to right -- another kind of hit he hasn't pulled off in a long time -- which might be the first time this year we could say Rios hit to all fields.

A one-game sample isn't enough to say whether he's made sweeping changes to his approach, much less if they've paid off. However, he did make one noticeable change while Alejandro De Aza took a couple of starts from him. As you might have guessed, it has to do with where his hands are before the pitch. 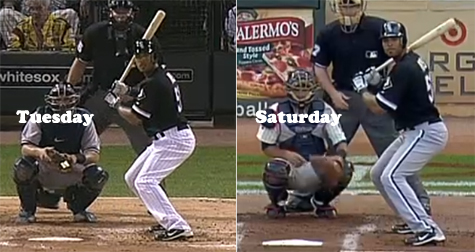 Rios has adjusted his stance gradually, raising his hands over the past few weeks. But now, prior to the pitch, he's resting the bat on his shoulder until the pitcher begins his motion. Up until Saturday, he held his bat perpendicular to the ground as soon as he set his feet.

I wish I could make similar, definite observations about his finish, but at this point, all I got are results, which have been different in his past few starts. Against Phil Hughes and the Yankees, Rios hit two grounders to the right side of second -- one well-hit, and one bouncer. On Saturday night, he went straight back up the box, and then dinked a single to right. Carl Pavano actually jammed him, which can be taken as a positive sign. Rios is hard to bust inside with a strike, because that's the only part of the plate he's covering when his body pulls away from the action.

Basically, I think I'm seeing a guy making more of an effort to stay on the ball, with the change in his pre-pitch look serving as circumstantial evidence. Guillen defended his decision with a similar observation, saying, "he's been swinging the bat good the last four or five games."

The only way we're going to know for sure is with a few more games, so I'd be up for seeing more of Rios, but not at the expense of Alejandro De Aza, who is delivering a professional approach at the plate and in the field. The Sox are in dire need of professionals.

Fortunately, Adam Dunn is being more than accommodating, if Rios wants to get back in the game. After Dunn recorded yet another three-strikeout game on Saturday, it's pretty clear that nothing has changed with him.