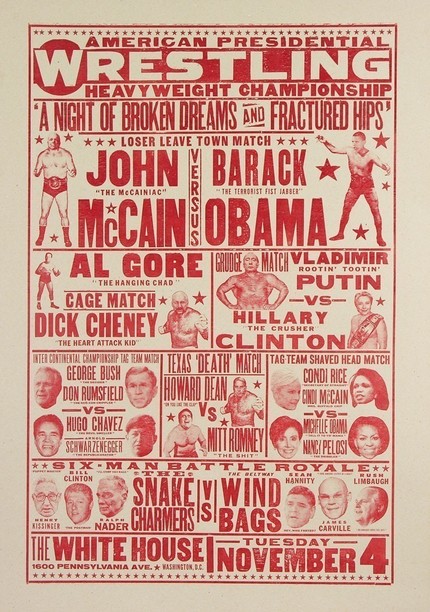 A Royal rumble between our great nations most electable wrestlers. The rules are as follows:

Two wrestlers in the ring initially, and the remaining participants are introduced in order in 90 second intervals, rather than all beginning at the same time. In addition, to be eliminated, a wrestler must be thrown over the top rope, with both feet touching the floor.

Presidents level of fitness is determined by their tenure as president, not their primes as physical specimens. There will be 2 grover clevelands competing

Entrance order is determined randomly, not by order in which they took office.

The contestants are as follows:

move: The Trail of Tears

move: The Napolean Stumper, or The Wilmot Proviso

move: The Failure to Prevent the Civil War

move: The Chester A. Arthritis

move: The Big Stick, or The Trustbuster

move: The Chief Justice, or The Tub Filler

move: The Great Depression, or The Stock Market Crash

move: The Atomic Bomb, The Habberdasher

move: Tombstone Piledriver, or the California Uber Alles, or The Government Flu, or The Cuban Missile

move: The Senate Majority Whip, or The War on Poverty, or The Tet Offensive

move: The Deep Throat, or The Saturday Night Massacre

move: The Pardon, or The Pratfall

move: The Gas Crisis, or the Nobel War Prize

move The Great Communicator, or Mourning in America

move The Thousand Points of Light

move: The Whitewater, or The Definition of 'Is'

That took a while. I'll put up a poll after i hear if anyone cares or has better ideas.