Dog Days Are Over

Share All sharing options for: Dog Days Are Over

I am not Prince Fielder.  This perhaps the most obvious statement I've ever written on this site.  I am not a talented baseball player.  I do not weigh more than 200 lbs.  I am not African-American.  I did not come from an unstable family.  But most importantly when it comes to the point I am trying to make in this article, I do not seem to have good years in the odd numbered seasons.

Honestly, I can't remember much from the end of the 2009 season.  When I decided to ride my bike to work the morning of August 23rd, I inadvertently made the decision to destroy my right arm for the next half year.  This combined with the beginning of my final lap around Champaign led to a bit of a funk and a lot of drinking.  The Sox crapped away the season by going 16-23 from that point on.  The Sox picked up Alex Rios on waivers and sent Jim Thome and Jose Contreras out west.  I had multiple surgeries, became left-handed and unemployed, and lived in a dark place until New Year's.  The winter had started with my fantastic case of encephalitis and as such, I spent more days in the hospital in one year than I had cumulatively in my life to that point.  Around the end of the season, I distinctly remember pledging to make it through the year if it killed me. 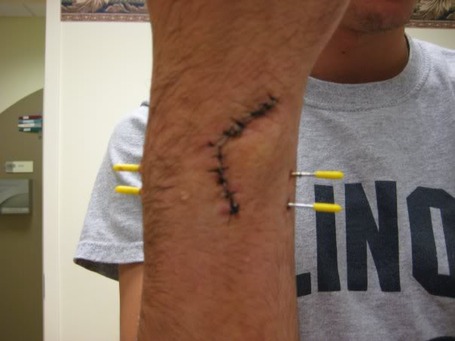 An artist's depiction of the 2009 season.

Now is the part where you've probably realized this is not analysis in almost any form.  2011 has sucked.  The season started with promise: new free agent acquisitions and an insanely high payroll/promising summer job and moving home with being able to spend time with my girlfriend.  Things fell apart.  The centre could not hold.  My right shoulder decided to frequently attempt to secede from the Union (a new name for my torso?).  I learned that I had the vet school equivalent of a baseball marriage.  I wound up hating my job (that might be a tremendous understatement).  A family member was diagnosed with ureter cancer.  And the White Sox kind of decided to suck ass.

Baseball, like most hobbies and forms of entertainment, has been about escapism to me.  That's not so easy when the team sucks.  The team continues to trend downwards and I continue to live in Kansas.  So it goes.  But hey, the terrible, horrible, no good, very bad season is almost over.  Sorry for the random articles and the increased hostility.  I'm working some shit out.  God, please give us an interesting/better offseason.