Dylan Axelrod made his major-league debut as a starter on Wednesday, and while he threw six innings of two-run ball, he set a couple of great examples in the process.

He's the classic tale of perseverance for all the non-prospects toiling away in the low minors and indy leagues. Two years removed from pitching 61 innings for the Windy City Thunderbolts, Axelrod found himself on a big-league mound, and stifling a playoff-caliber lineup to boot.

He's also the model for all fringe rotation candidates and emergency starters, because he played to his limited arsenal's strengths and pulled off his gameplan as well as anybody could expect. Axelrod is a sinker-slider guy and neither pitch stands out, except his control allows him to throw either pitch in any count.

That creates a little more wiggle room than those two pitches would normally allow, and separates him from your Jeff Marquezes, Lucas Harrells, Carlos Torreses -- hell, it even puts him slightly ahead of your Zach Stewarts at this point in his career. Pitchers of this variety can survive when they grab first strikes and hitters start expanding the zone, but when the tables are turned, they're forced to choose between fastballs or walks, and that normally doesn't end well.

That's not saying Axelrod can hold down a rotation spot, but if his performance against Detroit is any indication, he does a few things that give him a real chance to string together at least two quality starts. That might sound unimpressive, but it's a task that's too tall for most of his peers.

Axelrod wasn't afraid to crowd Miguel Cabrera with sinkers down and in, and when facing lefties like Victor Martinez, he started out his slider on the inside corner. Both strategies resulted in strikeouts of the two best Detroit hitters, and although they combined to ding Axelrod for a run in the sixth inning, it's hard to blame him. He threw an 0-2 slider that A.J. Pierzynski would've had to block ... if Cabrera didn't pick it off the ground and drive it into the left-center gap for a double. 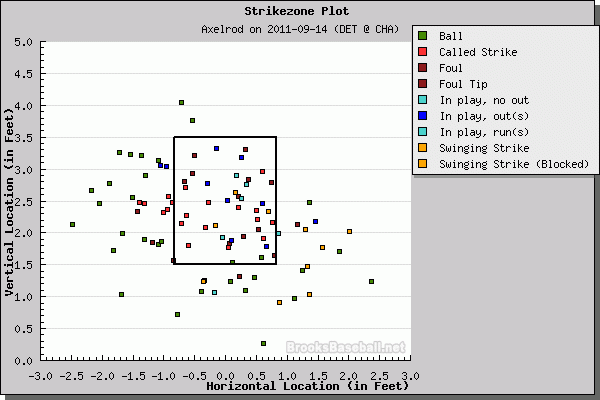 No. 2: His slider can get some lefties out.

Unlike a lot of iffy sinker-slider guys, Axelrod didn't have huge platoon splits in Charlotte:

That's because his slider has a late break with downward tilt. When he gets on top of it, it can resemble a changeup enough, so the change in speed makes up for a lack of dramatic break. Yet it also had enough horizontal movement to lure Delmon Young into some ugly half-swings as it drifted off the plate away. That's not going to fool a guy like Cabrera, but hey -- simple logic suggests that almost half the hitters in baseball are below average.

That said, there's a definite element of danger when the split is against him. His slider turned into his first major-league gopher ball when Carlos Guillen sat on it. He left it up, and true to form, it acted like a hanging changeup. John Danks can tell him some stories about those.

No. 3: Speaking of changeups, he didn't show it.

Axelrod threw 93 pitches over six innings, but only three were changeups. All three went for strikes, including one that resulted in his eighth and final strikeout of the day, and another that turned into a weak flyout to left by his final batter, Don Kelly. You can see both in his highlight reel:

The Tigers started hitting him hard at the end of his start -- they strung together the aforementioned Cabrera double, a line-drive single by Martinez and a lineout to right by Guillen. It's hard to tell whether all Detroit hitters were getting hip to his stuff, or whether three hitters with All-Star track records were doing what they were supposed to do against an emergency starter, but an adjustment is coming sooner or later.

The changeup is his third pitch, so there's probably a good reason why he didn't throw it much. However, it seemed to have its uses against hitters who hadn't seen it. If that part of his game holds, he might be able to mix in it a little more in his next outing and hold off the advance scouts for at least one more day.