The White Sox had a chance to take control of the game away from Fausto Carmona in the second inning. They erased the Indians' early 2-0 lead with an RBI double by Adam Dunn and a run-scoring single by Alejandro De Aza. That tied the game, and put runners on the corners with nobody out.

De Aza took off for second when Brent Morel hit a liner to right, and he didn't pick up the ball until it was too late. Kosuke Fukudome caught the ball while charging, threw to first in plenty of time for the double play, and because the ball was hit too shallow, Dunn didn't tag. So after Gordon Beckham grounded out, the Sox managed to come away from a two-run inning feeling deflated, which is something they excel at.

They wasted another scoring opportunity in the third (Paul Konerko caught too far off first on A.J. Pierzynski's liner to first), and in the fourth

The Indians didn't really need scoring opportunities, because they took advantage of a couple of Gavin Floyd mistakes. He hung a slider to Travis Hafner in the first that resulted in a two-run homer, and then did the same (on an 0-2 count!) to Asdrubal Cabrera in the fourth. Kosuke Fukudome also turned on an inside slider and crushed it into the right-field seats, giving the Indians three homers off Floyd.

Floyd pitched well enough otherwise, but the Indians already did enough damage to take the opener. The White Sox did narrow the gap on a groundout by De Aza, but Brent Morel's fly to center came down just short of the warning track to end another threat.

In the nightcap, the White Sox were able to turn the tables with a comeback victory of their own. However, a series of HBPs by Cleveland's clown-car bullpen dulled the joy, and led us to question why the White Sox weren't fighting back.

Not necessarily in the retaliation sense (Chris Sale had a one-run lead in the ninth). Not even in the mound-charging sense. But on the Sox's last offensive play of the game, Paul Konerko, who looked as pissed as ever when Zach Putnam nailed him in the hip, hit a routine grounder to short.

Alexei Ramirez, who reached base when he was drilled in the shoulder by Josh Judy, had a chance to roll over a second baseman with a takeout slide. Instead, he slid about five feet short of the bag, allowing Jason Kipnis to comfortably turn an inning-ending double play, leaving Sale with no breathing room for revenge.

It was an underwhelming end to an otherwise solid performance, as the Sox rallied from a four-run deficit.

Gordon Beckham led the way. His RBI double in the fifth got the Sox on the board, but his biggest hit would come two innings later.

Beckham was 2-for-2 with a pair of doubles when he came to the plate with nobody out and Tyler Flowers on first. Ozzie Guillen, of course, wanted Beckham to bunt. He jabbed at a couple, missing on one, and fouling another one back. That caused Guillen to remove the bunt sign, and Beckham followed with his third double of the night, which moved Flowers to third and completely changed the course of the inning.

Juan Pierre's bouncer to the right side tied the game and moved Beckham to third, and Ramirez followed by sticking his bat out on a low-and-away two-strike pitch and dropping a since to center, giving the Sox their first lead of the evening.

In between Beckham's last two doubles, Alejandro De Aza delivered a two-run two-bagger of his own. It should've been a one-run one-bagger, but Shelly Duncan chose to pull up short of the ball with a slide, and the ball spun away from him. That made it a 4-3 game, and the Sox seized the day.

The efforts of Beckham and De Aza helped get Dylan Axelrod off the hook, which made up for their inability to get him the victory in his much better first start. Tonight, he had very little. The lack of a slider forced him to throw more changeups and even some curves, and it didn't end well. The Indians jumped on him for four runs in the fourth, and they could've scored even more when Axelrod walked Duncan unintentionally following an IBB to Jim Thome.

Josh Kinney, of all people, bailed him out by getting Grady Sizemore to pop out to center. That was the start of 4 1/3 scoreless innings by the bullpen, with Matt Thornton, Jesse Crain and Sale joining the effort. Sale worked the last 1 2/3 innings for his seventh save of the season.

Alex Rios entered as a defensive replacement in the bottom of the eighth as a replacement for Dayan Viciedo. But to nobody's surprise, instead of taking over in right field, Ozzie Guillen chose to place Rios in center, bumping De Aza to right.

With two outs, this happened: 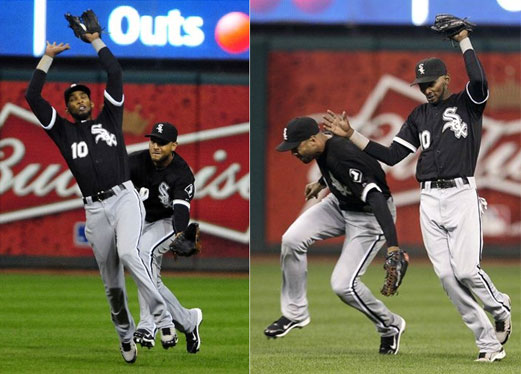