Scouting stuff: an amateur attempt to figure out pitching, part 1

Share All sharing options for: Scouting stuff: an amateur attempt to figure out pitching, part 1

These posts would be almost totally lacking in actual data and evidence without Dave Allen, Bojan Koprivica and Trip Somers. There are more I've read since Pitch F/x was born and I could start a list, but it would be long and linkless since my brain's just pretty much shut down at this point.

Okay, so now is the time on South Side Sox when we talk pitching, pitchers and pitches. Since I have done and plan to do scouting profiles on Sox pitchers and opposition hurlers as 2012 winds it's way toward spring and then into the season, it seems like a good idea to talk about what I look at, how I think I know what I know and all that. This will totally skip mechanics as while I have some thoughts on that, I don't have actual evidence or good language to talk about. This is strictly about what happens once the ball leaves the pitcher's hand.

The best place to start is with the most basic pitch, the one everybody has. Or a version of it, at least. I'm going to try to illustrate a few terms and basic concepts for the sake of clarity limiting the discussion to the heater. Now, when it comes to the fastball, I think everybody knows that velocity is a big deal. It's really that simple. Throwing hard is a substantial advantage that negates numerous other issues with the pitcher in question. To wit: 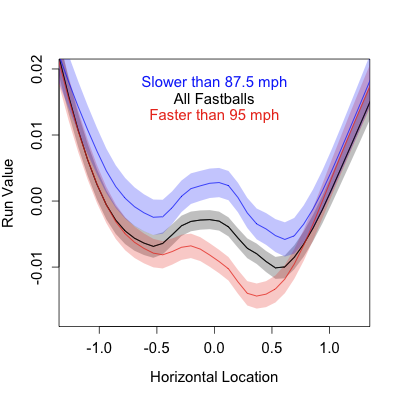 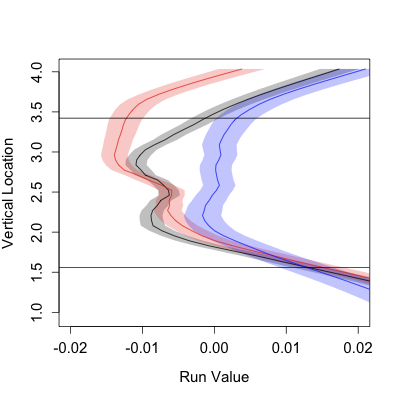 These graphs may seem a little weird. But the idea is that Dave has plotted what happened to different fastballs according to location, outcome and velocity. Negative runs is good. Positive is bad. And if .01 runs seems like a small number, consider that's on a per pitch basis. The course of 200 innings pitched runs in the neighborhood of 1750 fastballs (that's a round-ish number). At .01 runs per pitch, that's the difference between a 3.21 ERA and a 4.00 ERA. And that doesn't even take fully into account the synergistic effects. You'd be willing to bet a slider following a 97 mph fastball is better than one following 91 mph, right?

The takeaway is three-fold. First, I like charts and graphs. Second, above average velocity can solve a lot of problems. Third, you can undo all of that if you have no idea where the ball is going. In the top graph, the home plate runs from about -.5 to .5 feet, give or take a bit. Notice that's about where the colored lines start converging? In the bottom graph, the strike zone is marked by the horizontal lines. Same thing.

The last point explains at least some of Don Cooper's success. Think of guys like Matt Thornton and Edwin Jackson. Thornton is an obvious success story whose nickname Easy Heat makes it pretty clear what he's good at. But when he was with the Mariners organization, he couldn't hit the ocean with the broadside of a barn door. Then he moved to Chicago (thanks Joe Borchard!), learned a bit from Coop and eventually peaked as one of the very best relievers in the game relying almost solely on his incredible fastball. When he first got to the South Side, Coop didn't do too much more than point him in the direction of the plate.

After first learning to throw strikes rather than the alternative, Cooper further honed his skills such that Thornton developed legitimate command, or the ability to locate a pitch very near the intended target. That's in some contrast to control, which is just avoiding base on balls. The difference between command and control comes down to what's often referred to as stuff, or the quality of the pitches regardless of location. The quality of a pitch can be further broken up by velocity and movement. The more velocity and movement, the better the stuff, the less important exact location is in avoiding walks.

So, let's go back to Edwin Jackson, who has always had great stuff and in particular excellent fastball velocity. Under Cooper, Jackson started 30 games between two seasons and dropped his walk rate a full walk per nine innings. In doing so, he moved from his crappy career walk rate and actually manage to walk fewer than average hitters over that span. And if you watched him pitch last year, I'm guessing you wouldn't say he actually had a whole lot of command. From year to year, his command really didn't change a whole lot. What changed was his focus on merely getting the ball somewhere in the zone.Coop gave him the confidence to put the ball in a place where his stuff could actually make a difference. And lo, his ERA was almost a full run lower with the Sox compared to his career average thanks to Cooper's tutelage.

All this because Jackson--finally--consistently found the strike zone w/ his 95 mph fastball. Believe it or not, like most everyone else, I focus on velocity before anything else. It's fun to watch, yes, but it really is a huge difference maker, especially on a game to game basis where you never know if that's the start the pitcher happens to have it all figured out. But of course, a fastball like Thornton's or Jackson's is relatively rare. The average fastball in MLB is about 91 mph. That means for most, movement is a big concern and a primary differentiating factor from pitcher to pitcher.

Before we can really get into movement, it's important to know how I talk about it. For the past few seasons, MLB has been tracking pitchers w/ video cameras in all 30 ballparks and releasing the data for free to the public. Typically, the system of data collection is referred to as Pitch F/x, which I do and will. The system measures every pitch's movement relative to an imaginary spinless pitch that is only affected by gravity. An actual non-figment pitch on the planet Earth is affected primarily by the force imparted upon it by the pitcher, the subsequent spin and of course gravity. So Pitch F/x subtracts effects due to gravity and leaves us with the pitch's movement and velocity.*

Velocity is measured just after the pitch leaves the pitcher's hand (as of course it begins to slow down thereafter) and movement is usually talked about in terms of two-dimensions, the horizontal and vertical components of the pitch's movement.

A fastball in my terminology is either a running or a rising fastball. A runner (or two-seamer) has more horizontal movement than vertical. A riser (or four-seamer) has more vertical than horizontal. Really, though, a fastball has to have a good deal more of one or the other for me to actually call it one or the other. If it's neither, it's just meh from a movement perspective. It doesn't do enough to be characterized either way. My personal rule of thumb is that it needs at least twice (two times) as much of one component than the other to deserve a special designation. I don't think you'll find that more than loosely supported in any Pitch F/x articles, but I've found it useful in 4 years of staring at these numbers.

And to be sure, it is a useful distinction. Knowing the rise and run of the fastball helps in figuring out against whom the pitch will be effective. Running fastballs induce lots of ground balls. But they are also very vulnerable to the platoon advantage. For instance, lefties do hit righty two-seamers on the ground more of than righty four-seamers, but the ones that do end up in the air get hit very hard. The slugging percentage for either ends up about the same, but the two-seamer loses out because it gives up more base hits overall.

A righty batter versus a righty two-seamer, on the other hand, is a whole different story. While the four-seamer is basically no different regardless of the handedness of the batter, the two-seamer becomes a much better pitch thanks to even more ground balls. Extra base hits become a chore to muster up so much so that a two-seamer alone is a very effective weapon as long as the pitcher has the platoon advantage.

The four-seamer makes up for it a bit, since it nabs a few more whiffs per swing than the two-seamer, but it's not a huge margin. A two-seamer is definitely preferable if velocity is equal and the pitcher and hitter are on the same side of the plate.

Of course, this has implications for the lineups a pitcher is more or less likely to have success against, not to mention the secondary offerings he requires in order to be a successful major league pitcher.

For instance, the White Sox have been a righty-dominant lineup for much of the last half of Kenny Williams' tenure. Perhaps you also remember all of those mediocre never-pitcher-in-the-bigs sinker/slider guys absolutely killing us time and time again? Some of that is bad luck, some of that is Alex Rios being the worst thing since sliced genitalia, but a good amount of it is that if those sinker/slider types are throwing strikes, they're well set up to have success against the Sox' limited lefty lineup.

That is, the circumstances that led to the success of these oh so numerous mediocre AAAA types were critical and, for them, fortuitous. Had they faced off against the Yankees, with their gobs of lefties and switch-hitters (not to mention talent), the AAAAers simply wouldn't have that kind of success. Handedness matters and pitchers for whom it matters most are often candidates for the bullpen rather than kept on as starters. In the pen, managers can limit innings and play match-ups to limit exposure to platoon disadvantages and hopefully exploit what competitive advantages they do possess. Or maybe they're just mediocre AAAA types.

End of Part I, apparently. If this seems overly simple, I'm just trying to take it slow and get everyone on board. The off-speed stuff should see the pace pick up.

*This isn't crazy exact language, I know, but I think it gets the point across. Also: atmospheric effects from say pitching in San Diego or Denver are not modeled by PFx to my knowledge and are therefore still in the data. Same thing with temperature, for that matter.