FAQ: When SSS links out to other sites

Answering the questions about why South Side Sox will link out to other SB Nation sites.

Share All sharing options for: FAQ: When SSS links out to other sites

Since there has been some confusion about the purpose and intent behind the two occasions in which other sites were featured here on South Side Sox, I figured I would address the heart of the complaints here, and answer any concerns the best I can.

Whose decision is it, anyway?

SSS editors. So far, I've posted the two non-SSS stories, but the other editors have the option should they see something that is worthy of the placement.

There may be a rare occasion where the central SB Nation team uses one of the featured boxes, but not to alter or override news judgment. So far, they used a box for the "Welcome to United" video when the site redesign was rolled out, and that's been it.

Why feature other sites and authors?

Because other sites will post interesting stuff about the White Sox from time to time. I posted the entries by Rob Neyer and Cee Angi because they were interesting reads and hadn't been covered in such a way here (not to mention I participated in Rob's post). To give you an example of one in the future, we'll give John Sickels big play when he posts his Top 20 White Sox prospects list at Minor League Ball, because people who care about the White Sox farm system await its publishing.

And once the news cycle slows down to a crawl, I'll probably link to non-Sox stuff that is worth a look, something like that Bucs Dugout chat about their Navy SEALS training fiasco, or Blez's interview with Billy Beane at Athletics Nation. They're not going to take precedence over the most current White Sox stuff, but they'll be out there in case people are interested in it, too. We have the room.

What if I'm not interested in stuff written by anybody else?

You don't have to click on it. Before, it was easy to visit another site by accident. When I tried it the first time, the MLB Daily Dish post had no site ID tag, which led to some understandable confusion in going from this site to that one.

But now all articles have a byline, and each outside site is identified from the front of the page. As you can see highlighted at the top of the site here, Baseball Nation is identified as the source of the Adam Dunn post: 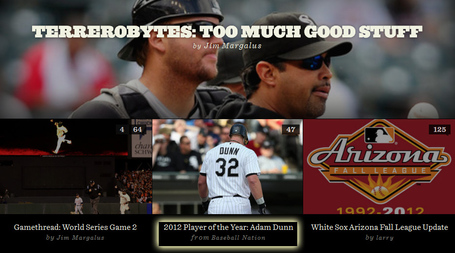 Or next to the author name down the page (example from Minor League Ball): 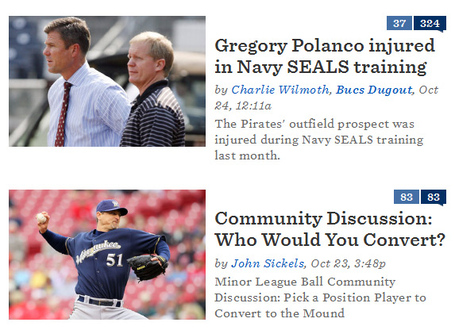 If you never want to read anything from Baseball Nation or any other site, nobody is forcing you to.

What if I still hate this?

Then direct it at us here, because SSS editors are the ones choosing to put it in front of your eyes. Disagree with or debate the alien authors on their alien sites as you please (within their standards), but so far, the main arguments have centered on the fact that readers were reading a post by an author they didn't expect. The content of the posts were largely well-received, or at least not the issue.

Other SB Nation sites and authors don't have any control if I feature them on SSS, so arguing over why it was featured on SSS in their house only stands to confuse and agitate people who don't know what all the yelling is about.

One more thing I'd like you to keep in mind -- there are a lot of good people doing good work all around this network, and I'll often get inspiration from seeing another blogger execute a great concept. If I link to an outside post and the response from SSS is positive or indifferent or (respectfully) negative, it gives me some idea whether it's worth filing away for later use.

I see a lot of benefit in highlighting outside voices, even if the White Sox aren't the topic at times, and I hope you'll see it, too. Either way, thanks for reading us.