Profiling the past: LaMarr Hoyt

LaMarr Hoyt had high peaks and low valleys throughout his career.

Share All sharing options for: Profiling the past: LaMarr Hoyt

Next season will be the 30th anniversary of the first White Sox team I remember playing. The 1983 White Sox started out slow but caught fire in the second half to win the AL West by 20 games. Greg "The Bull" Luzinski and Ron Kittle were blasting home runs into the upper deck. Harold Baines was coming through in the clutch seemingly every night. Rudy Law stole a team record 77 bases while only being caught 12 times and Carlton Fisk was in the midst of his finest season in a White Sox uniform. 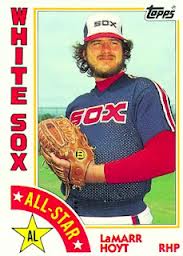 The main story of the 1983 White Sox though, was their unbelievable starting pitching. LaMarr Hoyt anchored the staff which included Richard Dotson, Floyd Bannister, Britt Burns and Jerry Koosman.

LaMarr Hoyt was acquired by the White Sox in a 1977 trade with the New York Yankees that also brought Oscar Gamble for Bucky Dent. Hoyt spent his first season in Double-A and Triple-A in the Sox minor leagues and struggled, going 5-15 with a 4.70 ERA. The following year, the Sox pushed him back down to Single-A Appleton and Hoyt dominated. He went 18-4 with a 2.90 ERA. In 1979, LaMarr pitched well in Double-A before struggling in nine starts at Triple-A. He did enough to earn his first cup of coffee in September of 1979 as he pitched three scoreless innings.

In 1983, Hoyt went 24-10 as he led the league in wins again. He only struck out 148 guys in 260 2/3 innings, but he also limited hits and walks. He only walked 1.1 batters per nine and his WHIP was a league leading 1.024. Including the playoffs, the White Sox won the last 15 of his starts and Hoyt got the decision in 14 of them. The last time that Hoyt took the ball and the White Sox lost was on July 23rd against the Brewers. After that loss, he went at least seven innings in 11 of his last 15 starts and completed six of them, including September 11 when he went 10 innings against the Angels.

In Game 1 of the ALCS, Hoyt took the mound for the first and only time of his postseason career. He dominated the Oriole bats as he went the distance and the White Sox took a 1-0 lead in the series. Cal Ripken singled home a run in the bottom of the ninth inning to cut the score to 2-1, but Hoyt induced Eddie Murray to ground out to end the game.

Unfortunately, the White Sox bats went quiet during the series. They lost Game 2, 4-0. They got blown out 11-1 in Game 3. In Game 4, Britt Burns pitched a wonderful game as he threw nine shutout innings. The only problem was the White Sox didn't score a run, either. Burns was sent out for the 10th and Tito Landrum took him deep to break the scoreless tie. The Orioles tacked on two more runs and would go on to win the game and the series. If the White Sox could have squeaked out just one run, LaMarr was set to pitch the decisive Game 5. Given his incredible run, it is hard not to think that we would have had a World Series 22 years before we would finally get one. Hoyt was awarded the Cy Young for his efforts.

Hoyt would win his first two starts in 1984, making it 17 straight starts that the Sox won when Hoyt was starting before they finally lost 2-1 on April 15 against the Yankees. Hoyt went nine innings, but the game would go to extra innings tied at one when Ken Griffey Sr. won the game in the 10th. The Sox would lose six of his next seven starts as the 1984 season slowly transformed from serious World Series hopes to a major disappointment. The Sox finished 75-87, 10 games behind the AL West champion Royals.

Hoyt would go on to finish the 1984 season with a record of 13-18, this time leading the league in losses. He had a 4.47 ERA over 235 2/3 innings. After the season, LaMarr was traded to the San Diego Padres for a package of Ozzie Guillen, Bill Long, Tim Lollar and Luis Salazar. Long would pitch five seasons of mediocre relief for the Sox, Lollar would pitch in 18 games before being traded to the Red Sox for outfielder Reid Nichols, Salazar hit 10 homers as a utility man in 1985 and we all know the Ozzie Guillen story on the South Side.

Sometime at the end of 1985, Hoyt hurt his shoulder. In February of 1986, he was stopped at the Mexican border with drugs. He later was stopped in California and caught with marijuana. He spent 28 days in a treatment center before pitching the '86 season with a bum shoulder. Hoyt would end up at 8-11 with a 5.15 ERA that season. Here is an article by the Los Angeles Times that chronicled his personal problems.

It would be the last time he toed a major-league rubber. Hoyt was caught at the Mexican border again with Valium and was ordered to do a 45-day prison sentence. The Padres released him and he was suspended for the '87 season by Commissioner Peter Ueberroth. The suspension was later reduced to 60 days.

Hoyt would re-sign with the White Sox after his suspension in 1987, with an eye on making it back to the majors in 1989. Unfortunately, he was again caught with drugs in December of 1987, which ended his baseball career. Hoyt finished his career with a record of 98-68 with a 3.99 ERA over his eight Major League seasons.

Hoyt did some work for the White Sox earlier in the decade as a spring training instructor and has seemingly gotten his personal life in order.

It will be 30 years since LaMarr's signature season. If only the Sox could have gotten him the ball for Game 5 of the ALCS...