The White Sox haven't made their first big move of the offseason, but team members are falling in line.

As more and more media discover that Ontario's ban on pit bulls is going to pose problems for Mark Buehrle, we're still awaiting the first reaction from Buehrle himself.

Ken Rosenthal has the closest thing yet -- accounts from friends of Buehrle and other sources -- and he's not happy, because the story is the Marlins went back on their word to both Buehrle and Jose Reyes:

The Marlins do not award no-trade clauses, but club officials, while recruiting Reyes and Buerhle as free agents last offseason, assured both players that they would not be moved, sources said.

Buehrle knew the Marlins’ history of dumping high-priced players, and it concerned him, according to a friend. Team president David Samson, however, told both Buehrle and his wife, Jamie, that the team was committed to a long-term vision, sources said. [...]

Jamie, sources said, was emotional in a conversation that she had with Samson after learning of the trade Tuesday. Samson had initiated contact with the Buehrles to inform them that a deal was imminent.

It's easy to both sympathize with the Buehrles as people, and shrug at their complaints from a professional standpoint. Ballplayers are no different than the rest of us here: Verbal agreements might work for borrowing a DVD, but when lots of money and time is on the line, if it's not in writing, it's not worth anything. Samson and Jeffrey Loria certainly don't put a price on principles. Just ask Miami-Dade County taxpayers: 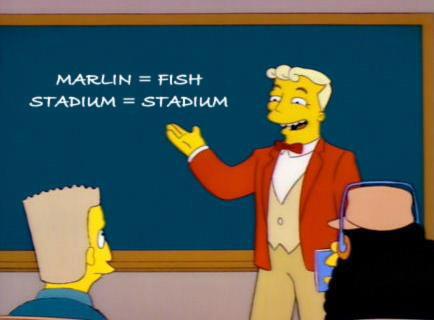 That said, when Ozzie Guillen made the move to Miami, he unwittingly started an alchemy experiment by going from one of the most loyal owners in baseball to the least scrupulous. Buehrle might be in the same boat.

We hear it a bunch from people inside and outside the organization -- Jerry Reinsdorf is unusually faithful, and Kenny Williams is uncommonly forthright. When Buehrle signed his second extension with the Sox in 2007, Williams had at least one trade proposal sitting on his desk with Buehrle's name in it. Nevertheless, the negotiations required that Buehrle give the team a 1½-year window without trade protection. Buehrle granted it to them, but Williams didn't exploit it.

I don't know whether Williams or Reinsdorf made any assurances that Buehrle wouldn't be traded -- or at least that his best interests would be kept in mind throughout -- but given his surprise at the Marlins acting like the Marlins, it makes me wonder if Buehrle was able to successfully arrange an informal agreement before. Otherwise, I'm at a loss, much like they are, albeit for different reasons.

In an overview of the Sox's roster and payroll situation, Mark Gonzales sees the White Sox adding Andre Rienzo, Jared Mitchell, Josh Phegley and Santos Rodriguez to the 40-man roster, which is currently at 34.

While the Sox mentioned Dayan Viciedo as a possibility to fill the void at third base, Hahn delivered the highly anticipated addendum to that statement by downplaying his chances, saying, "At this time, I don't think another move is in his best interest. It's something to talk about and consider and not rule it out, but we've got other options ahead of that one."

Colin, before he vanished, frequently said that Chris Sale needed to add weight in order to better endure the rigors of a 200-inning course. Scott Merkin reports that Sale is doing crossfit and pilates workouts this offseason. I can see crossfit becoming the flavor-of-the-month workout in the "Best Shape Of His Life" stories during the spring, so I'm not sure whether to be encouraged by this news.

I think it is worth being encouraged by Sale's desire to stay out of the World Baseball Classic. I don't think the WBC is something to fear in most cases, but since Sale doesn't yet have a "normal" when it comes to spring preparation, I'd hope the Sox would be able to stretch him out on their own terms.

Dan Hayes talks to Doug Laumann about the White Sox's plans to add seven scouts -- two in the states and five internationally -- in pretty deep detail. One good quote:

Laumann believes international production will help the team in the amateur draft in terms of creativity. In years past, because the organization needed to add bodies the international program didn’t produce, Laumann was forced to find players to fill holes instead of taking risks on higher potential draftees.

"Your hands are tied going to the draft knowing you have to find that shortstop or second baseman," Laumann said. "It takes away from your creativity and what you can do."

Veteran stand-up comedian Jimmy Pardo, who warms up the crowd for Conan O'Brien, talks about throwing out the first pitch at a White Sox game:

They can't all be as smooth as Gus, I guess.