The White Sox had plans to move off of 35th Street to the South Loop not once, but twice.

The Chicago White Sox is a baseball franchise that has never strayed too far from where it grew up. The Sox first played at South Side Park, which was located at 39th and Princeton. In 1910, the team moved four blocks north to Comiskey Park, its home for the next 80 years. The Sox moved across 35th street in 1991, and they've been there ever since. The White Sox have called the same neighborhood home for the past 111 years.

Now imagine a different Chicago with a different history. The White Sox play in a new, retro-style ballpark at Clark and Roosevelt. "Sox Park," a 40-year-old concrete donut at Dearborn and Polk had recently been demolished. The corner of 35th and Shields is home to the campus of the Illinois Institute of Technology. A plaque is the only reminder of the fact that baseball was once played there.

That paragraph is a figment of my imagination. But it almost became a reality.

Our story starts in the early 1960's. Fifty years ago, Urban Renewal was all the rage. Mayors in cities across the country wanted to clear unsightly old buildings and replace them with ultra-modern concrete structures. In New York, Robert Moses had free reign to transform whole neighborhoods. He was so fond of the wrecking ball that the building preservation movement sprang up just to stop him. The grand old ballparks that were built in the early 20th century were being replaced by more contemporary stadia. City planning commissions across the country had drawings of ballparks that could house football and baseball.

One by one, the old ballparks disappeared. In Washington, Griffith Stadium gave way to D.C. Stadium, Forbes Field was replaced by Three Rivers, Shibe Park was supplanted by Veterans Stadium, and so on, and so on.

Enter Arthur Allyn. Allyn, through his Artnell Corporation, bought the White Sox from Bill Veeck in 1961. He was a mild-mannered man from a wealthy family. He collected butterflies. He had big ideas.

Shortly after buying the team, he announced he was going to build an exclusive club for season ticket holders called the "Coach and Nine." It would be located in a new building across 35th Street, pretty much where the World Series statue is located now. The Coach and Nine never got off the drawing board, but that didn't stop Allyn from introducing his next big idea.

In 1964, Mayor Richard J. Daley formed a commission to find locations for a modern super stadium that would house all of the city's sports teams. George Halas, the Wrigleys, and the Allyns all said they were interested in what Daley had to say. Allyn went one step further...

In 1967, he proposed a massive sports complex that would be built over railroad tracks in the South Loop. The complex would house separate open air facilities for baseball and football, along with an enclosed arena for hockey and basketball. It would have been located on a parcel of land that was bordered by Clark, State, 15th Street, and Polk. 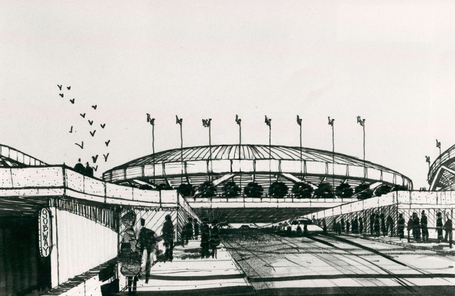 The baseball stadium would be shared by the Sox and the Cubs. The Bears would play in a new football field called Halas Field (it could also be used for soccer). The Bulls and Blackhawks would play in the winter sports arena. The whole thing would cost $49 million, and be completed through private financing. Allyn did not believe in taxpayers footing the bill "for the benefit of a few private industries." He had an informal construction agreement in place with Del Webb, and negotiations were underway with the Chicago and Western Indiana Railroad, which owned Dearborn Street Station and the tracks leading to it (The stadium would be built on top of the tracks. Even though the passenger rail traffic was falling like a rock, Dearborn Station was still home to the Santa Fe Railroad and its fleet of high-class trains to Southern California).

Allyn hoped to break ground on the new project by 1969, and have everything in place by 1972. Halas balked. The city was still working on a stadium proposal of its own, and he didn't want to be tied down.

No problem, Allyn said, he could still build the baseball and indoor stadia. The Cubs weren't interested in sharing real estate with the White Sox, and dropped out.

In 1969, Allyn's wife suffered a stroke. As she recovered, Allyn made sure her room at Mercy Hospital faced Comiskey Park so she could see the fireworks from the exploding scoreboard. Her health, combined with a feud with his brother John about the future of the team led Arthur Allyn to retire at the age of 55. Frustrated with a lack of progress on a new stadium, Arthur thought about selling the White Sox to a group of Milwaukee businessmen led by Bud Selig. John Allyn thought it was insulting to sell a Chicago civic institution to a city like Milwaukee, and vowed to keep the team in Chicago.

By 1971, John Allyn said he was more than happy to keep the Sox in Comiskey Park, and pulled out of Mayor Daley's proposed super-stadium (by this time, the stadium was going to be located on a man-made island in Lake Michigan. Daley finally nixed the stadium proposal for good in 1975).

Flash-forward to 1985. Jerry Reinsdorf and Eddie Einhorn were the new owners of the White Sox. They needed a new stadium. When they bought the Sox in 1981, they also bought an engineering study conducted by Bill Veeck that said there was nothing wrong with Comiskey Park that couldn't be fixed through regular maintenance and a new coat of paint. That engineering report was overly optimistic. The new owners discovered the depth of Comiskey's structural problems when they installed skyboxes in the winter of 1982. Engineers found severe metal fatigue throughout the ballpark. Without immediate repairs, they said, the upper deck would collapse.

In 1986, Reinsdorf was armed with two pieces of information. The first was the engineering report that said Comiskey Park had reached the end of its useful life. The second was a directive from the American League that said the team had to be in a new ballpark no later than 1992. 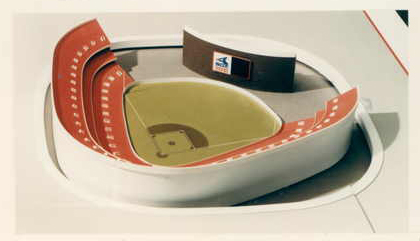 Reinsdorf had a friend in Mayor Harold Washington. The mayor wanted to build a shared football and baseball stadium at Clark and Roosevelt. The stadium would have moveable grandstands that could roll around like pieces of a giant pie. The Sox were interested in the taxpayer funded stadium, but they were not interested in footing the bill for the infrastructure that would make it a reality.

In 1985 the corner of Clark and Roosevelt was nothing more than weeds and railroad tracks that had been abandoned by the Rock Island five years before. The city needed to build the pipes, sewer lines, power lines, roads, bridges, and subway stops that would serve the new stadium. Reinsdorf wanted to keep the money from parking and concessions. He also didn't want to pay rent on the new facility. City Hall expected the Sox to foot some of the bill. That was a non-starter as far as the Sox were concerned. By 1986, the team was flirting with west suburban Addison. Reinsdorf's real estate company already owned a plot of land at Lake and Swift roads. I-290 was right next to the proposed stadium site, and Governor Jim Thompson was willing to give them an off-ramp.

The people of Addison put it to a vote. The referendum was defeated in November of 1986. But Harold Washington wasn't through. In early 1987 he cut a deal that would keep the Sox within the city of Chicago. The state would create a board that would be responsible for building and maintaining a new Sox Park that would be located at 35th and Shields. Even though the South Loop would have been a fantastic site for a stadium, the existing Comiskey Park infrastructure could be retrofitted to serve the new facility across the street.

Harold kept the Sox on the South Side of Chicago. All he had to do was work with Governor Thompson on creating the state-run entity that would own the new ballpark.

Washington died of a sudden heart attack just before Thanksgiving in 1987. Without Washington's leadership, it was up to Thompson to push the stadium bill through Springfield.

We know the rest of the story ... the Sox threatened to move to Tampa ... Speaker Michael Madigan stopped the legislative clock while Thompson worked the floor for votes for the stadium bill ... and the Sox moved into their new ballpark in 1991.

U.S. Cellular Field is our baseball home away from home. I like the fact that I can walk the same streets and watch the same baseball team that a Sox fan could watch in 1913 (not literally, of course). I like that sense of geographical kinship with the generations of White Sox fans who came before.

On the other hand, can you imagine the view of the Chicago skyline just beyond the center field scoreboard? The White Sox would be another downtown amusement, just like the museums or Navy Pier. Tourists from all over the country would pencil a Sox game into their list of things to do in Chicago. It also would have been way ahead of the real estate curve. Like the Cubs in the early 80's, the Sox would have found themselves in the middle of one of the hottest neighborhoods in town. It could have transformed the Sox from a neighborhood team into a team with a regional following.

But, the South Loop stadium proposals exist on the same "what if" pile that includes such topics as "What if the Sox didn't put their games on SportsVision?" or "What if Harry Caray never left for the Cubs?"

I'd like to thank the truly wonderful Stadiumpage.com for the images. The "unrealized concepts" section is a treasure trove of ballparks that never were.

Most of information about the 1967 and 1985 stadium proposals came from the Chicago Tribune archives. The story about the Comiskey Park engineer's report came from the book "Stealing First in a Two Team Town," by historian Rich Lindberg.