Is it possible that the much maligned car salesman is at the top of the pile?

Share All sharing options for: Bud Selig: Best of the Big 4 commissioners?

It's been a very interesting fall and early winter for 75% of the commissioners in the Big 4 sporting leagues.

And somehow Bud Selig has managed to just kind of hangout in the background not really doing much of anything or drawing much attention to himself. You know, the Milwaukee way!

Seriously though, how impressive is this? This is a man who has been routinely vilified his entire career. He's been a stooge for the owners, turner of a blind eye towards steroid abuse, ruthless profiteer willing to burn traditions to the ground in pursuit of more money and exposure for the sport, and other crimes against humanity. But thanks to the wonderful linear nature of time, he's the warden who hasn't upset the general population in the longest amount of time.

Sure there was moving the Houston Astros to the American League West to balance out the leagues at 15 teams apiece. And there was adding the extra Wild Card slot to each league, "devaluing" the regular season by upping the percentage of teams in the playoffs to 33% (still the lowest ratio in the Big 4). But he didn't throw away a second season in a decade. He didn't lose a staring contest with his officials and regularly antagonize individual players. And he doesn't let Donald Sterling continue to own a team.

Jim made a fantastic point about it all the other day over lunch. If Bud Selig looked like Roger Goodell, people would likely be far less harsh and demeaning when talking or writing articles about him. Seriously though, it's a race between Selig and Stern for least photogenic. 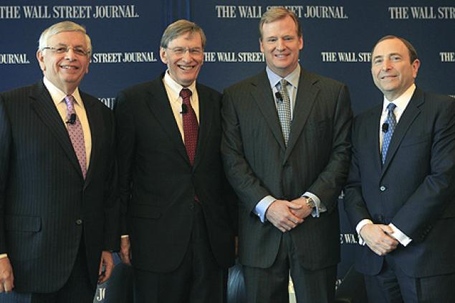 I'm not trying to say that Bud is the best commissioner baseball ever had. I'm neither old enough nor have done the proper research to make such bold declarations. But he also hasn't been the worst (that's an argument for a different day). For right now, Bud Selig is the most likeable commissioner in the major North American sports. And that is some sort of miracle.