WAR's toll on the White Sox

Share All sharing options for: WAR's toll on the White Sox 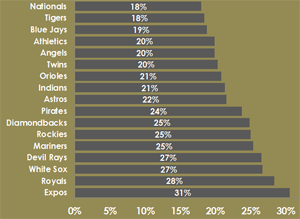 Over at Beyond the Box Score, Bill Petti put together a helpful chart that isn't easy to look at for White Sox fans. In one bar graph, it brings to mind many, many punchless April nights.

Basically, Bill went through the last 10 years of FanGraphs and counted all the position players who racked up a negative WAR and at least 100 plate appearances in the same season. As it turns out, the Royals are the only current team that devotes more of its roster to sub-replacement-level players. Two of the bottom four teams have different names and owners.

Now, there are some shortcomings with this study. Cutting off the list at 100 plate appearances means that Geoff Blum and his -0.4 WAR in 2005 don't count, because he fell one PA short. (Then again, that Game 3 homer was worth, like, 5 WAR alone.)

The reliance on FanGraphs data only means that the Sox don't have Nick Swisher's plate appearances on the these books for 2008. FanGraphs looks on Swisher's only season with the Sox in a far more charitable light (1.3 WAR) than Baseball-Reference.com's WAR (-0.8). Most significantly, a backup catcher who gets 101 plate appearances of -0.1 WAR is treated the same as 2011 Adam Dunn. It could use a little bit of weighting to make it really scream.

Nevertheless, this chart allows us to get a quick and dirty look at which teams are most hampered by players who can't hold their own. The White Sox have dragged more dead weight than every team save one under these criteria.

And to address that last drawback, I've gone through the last 10 years of FanGraphs' data to see which position players finished below replacement level. You'll see the nature of the White Sox's negative WAR become more damaging over time.

In the Jerry Manuel years, the negative-WAR players were the kind of players you'd expect to not contribute all that much -- backup catchers, utility players and rookies. You also see a couple of players who were thrust into positions they weren't cut out for -- Perez and Borchard had to try to replace Magglio Ordonez after his knee injury in 2004, and Daubach played more first base than expected as Paul Konerko contemplated his entire hitting approach. Really, that Konerko death spiral is the only occurrence that qualifies as a complete letdown.

This was a benefit of Manuel's habitual tinkering, but it had its drawbacks -- there wasn't a great pitcher-development system in place (a halfway-decent fifth starter would have changed the 2003 season), and some veterans had rightful grudges.

When a team replaces a manager, they often look for a guy with contrasting values. Sure enough, Ozzie Guillen and Don Cooper had a much better handle on young pitchers, but Guillen also had far more patience in the struggling veteran -- which eventually transformed into an outright reluctance to pursue Plan B for reasons undetermined.

For instance, compare 2003 Konerko with 2011 Dunn. The nadir of Konerko's season came at the halfway point -- 81 games in, he was hitting .185/.260/.265 over 235 plate appearances. At the same point, Dunn was hitting .173/.308/.316 with 277 plate appearances. That's roughly a nine-start difference, because Manuel actually gave Konerko some serious time on the pine. From games 70 to 90, Konerko started only five times. Guillen never gave Dunn that kind of benching. He said he couldn't give Dunn that kind of benching.

Guillen also grew attached to players in a way Manuel didn't. That's how you get 196 plate appearances of Timo Perez in 2005, 359 of Mark Kotsay in 2010, and Juan Pierre getting the seventh-most plate appearances in the AL in 2011.

Coaches' favorites don't doom a team alone. Tony La Russa and Ron Gardenhire have a tendency to grow enamored with scrappy players who don't contribute any particular tangibles. Almost every team has a guy that fans think they should see far less of. Kotsay is Skip Schumacher, Omar Vizquel is Juan Castro, Finkle is Einhorn, etc.

But Guillen's chief weakness was exacerbated by poor roster decisions. It's hard to hold Kenny Williams wholly accountable for Dunn, because even the biggest skeptics didn't see .159 in his future. Alex Rios was a more dubious acquistion, because he was in the middle of a three-year decline that caused me to compare him to Scott Linebrink at the time. But he was supposed to at least offer something at this point in his career.

Williams compounded the unforeseen dives by making significant investments for low-ceiling fixtures. In the BTB post, Bill notes that Mark Teahen was one of three players with five negative-WAR seasons, including his last two years with the Royals. The White Sox then signed him to a three-year extension for reasons that are still hard to fathom. At least Williams got out from under it a year and a half in.

We're all familiar with the Kotsay decision, but in a sentence, the Sox chose him (-0.8 WAR from 2007 to 2009) over Thome (6.4 WAR). Pierre needed too much quantity to produce quality. And when you add up the aforementioned four players, then it brings Vizquel into the equation. He shouldn't have mattered that much, but when you have four roster spots taking things off the table, a fifth is the last thing you need, regardless of role.

Here's what you need to know about the 2011 White Sox's roster management: Two players that Guillen and others considered essential during the season couldn't find a major-league job among the 29 other teams afterward. One of them received 711 plate appearances.

This is why the White Sox have a new manager. Maybe the entire leadership of the organization should have been gutted, but at least one of them had to go. Jerry Reinsdorf chose the guy who already had one foot out the door.

As we enter pitchers and catchers month -- and the official start of my seventh season as a White Sox blogger -- the Sox are in a more reasonable place when it comes to negative WAR. That doesn't mean we'll see less of it. Dunn and Rios could be in for repeat performances. Alejandro De Aza, Dayan Viciedo and Tyler Flowers don't have reliable track records. Brent Morel, Gordon Beckham and Brent Lillibridge could regress, too.

But should any of all of them fall into Teahen Territory for hundreds of plate appearances, at least the Sox will have their reasons for allowing it to happen. Austerity measures removed the backup plans. Viciedo and the young'uns will get very long leashes in the hopes of finally developing credible and cost-efficient position players. Dunn and Rios are here until they aren't, so the most we can hope for is a depth-chart drop if and when better candidates surface.

It's difficult to shape this sensibility into a marketing slogan ("White Sox Baseball: It's More Explicable"), but when a team makes so many wrong turns, any one move isn't going to put them back on track. Barring unforeseen renaissances, this will have to be a year of making better mistakes.

The silver lining is that the White Sox don't have to improve in the standings to create a far more watchable product. 2011 wasn't just short on production, it was short on moments, and especially at home. The Sox can win 75 games in 2012 and still offer far more entertainment if they do a better job of seizing scoring opportunities. I suppose it's not a great sign when we're talking about emotional victories over real ones, but as the aforementioned chart shows, no win improvement should be taken for granted.