About the Cubs playing at U.S. Cellular Field in 2013

Share All sharing options for: About the Cubs playing at U.S. Cellular Field in 2013

By now most of you have heard the rumblings that the Chicago Cubs may be calling U.S. Cellular Field home during the 2013 season. If the Cubs want to renovate Wrigley Field and make the necessary repairs to bring the stadium into the mid-20th century, they're going to need to shut the place down for at least a season. Which leads to an interesting dilemma. Where will they play?

The fans who honestly think it's feasible for the Cubs to play in Milwaukee are lying to themselves. That's far too much of a headache for the schedulers and not entirely realistic for the fanbase. Even more humorous is the "Let's play our games at Fifth Third Ballpark (home of the Kane County Cougars)" contingent. Do you know how many seats there are? 14,000! That's a lot of money that the team would lose playing in such a tiny stadium. There is only one realistic option for the Ricketts if they finally decide to stop trying to "fix" every problem with duct tape and actually update their shrine to mediocrity: become temporary tenants of our Chicago White Sox.

"Could the field handle the strain of both teams playing there all season?" the uninformed and foolish may ask. There is a reason we gave our groundskeeper his own bobblehead day. He's the best at what he does. 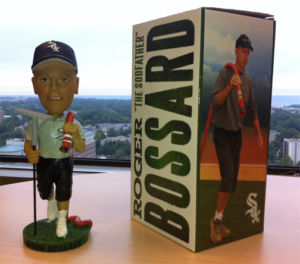 Swag as it gets.

Over 25% of the fields currently used in MLB's playing surfaces were designed by Roger Bossard. He's the Don Cooper of dirt. If any field could support 162 games of usage, it's U.S. Cellular Field.

Obviously there are going to be sects in both fanbases that don't like the idea. "But I'll get shot in Bridgeport! But they don't have streets full of bars to get hammered at!" To the morons who think Bridgeport is dangerous, it really isn't. The stadium is not in the middle of some gang war stricken slum. It's next to the highway, a church, and a high school. And while it may not have the yuppie bars surrounding the neighborhood, it does have some much better things. Like parking lots, bathrooms not designed before Jackie Robinson broke the color barrier, diverse food and beer selections, seats that don't come with the view of a steel beam. You won't have to park in someone's driveway and pay them $50 for the privilege. You won't have to pee in something originally meant for horses to eat out of. Don't like Miller Lite? That's cool, we have over a dozen different choices along with margaritas and a bar built under the right field stands. An entire bar! It's amazing what modern construction can accomplish!

"That's fine and dandy for them, U-God, but what about us fans who will have to deal with those insufferable jerks in our territory all summer?" you say. Well, yeah. That's kind of going to blow. But you know what won't suck? Cubs fans helping to pay for Adam Dunn and Alex Rios' contracts. You know Jerry Reinsdorf isn't just going to let another team play in his yard for free. Think of all the extra scratch the franchise would get. Think of the fact that all thirty teams would play on our home turf in the same year! I'm all for it and you should be too.