Share All sharing options for: Another look at Matt Thornton's unusually hard slider

You may remember a post I wrote a month and a half ago that asked why Matt Thornton started throwing this ineffective 90-mph changeup for no good reason.

You may also remember that I had to amend the post, because PITCH f/x specialist Harry Pavlidis informed me that many of those pitches that FanGraphs classified as changeups were actually sliders -- they just weren't the sweepers he usually threw. No, these were thrown much harder, and with less movement. Neither pitch was particularly good, but there was a difference.

How did Harry know this? Because he spent the last four years (with some help from Lucas Apostoleris and others) tagging 3.2 million pitches tracked by PITCH f/x. Then, Dan Brooks at BrooksBaseball.net took that data, wrote a script, and presented it in the form of player cards featuring seasonal data with correctly tagged pitches, with a dozen ways to cut 'em up.

With this awesome tool, we can now look at Thornton's data again, and figure out when those super-speed sliders emerged and disappeared.

And look where he ended up in September:

They're both sliders, but they're not the same pitch. Besides the vast gap in velocity, the early slider also features a different kind of break, and a distinct release point, too.

But if you're bored by numbers and charts, there are pictures! Here's an extremely helpful graph that shows you just how much Thornton ramped up his slider velocity in comparison to the previous two years, as well as the way he slowed it down over the final two months: 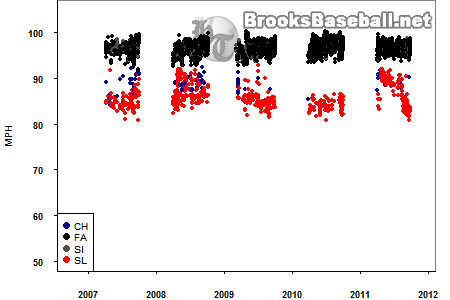 You can see a little gap in the middle of his 2011 numbers, and if you go back to the pitch charts and outcomes and sort by month, you might be able to see why he went back to throwing fastballs nine out of 10 times by midseason. It's worth noting that in May and June, he threw 36 sliders, and only got one swing-and-miss to show for it.

And besides graphs, there are also maps that show the movement of a pitch from the catcher's perspective, and also from a bird's-eye view. I compared Thornton's slider against lefty (a sweeper) against Sergio Santos' slider to righties (a biting late-breaker). You can see why Santos' is a lot more difficult for hitters to resist, because it sticks to the fastball's path for longer before peeling off at the very end:

This is all awesome, and should be quite helpful to use with pitchers we need to know better. Here's another one for the road -- see Philip Humber dip his toe into the slider pool, and then embrace the pitch. 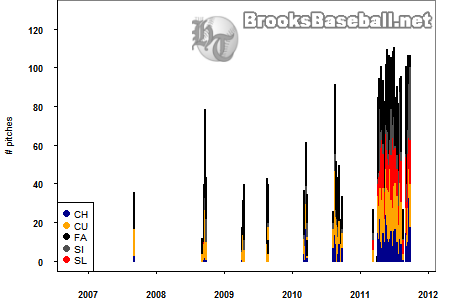