This week in former White Sox: Vizquel, Santos and more

Share All sharing options for: This week in former White Sox: Vizquel, Santos and more

One of the underrated tragedies of the 2011 season is that it forced us to take a cold, impersonal look at Omar Vizquel.

Vizquel is a baseball treasure for numerous reasons -- his unimposing but increasingly amazing physical stature, his dexterity, his ability to pursue other interests and still dedicate himself to baseball beyond question, his collection of wackadoo shirts -- but the White Sox found ways to suck fun out of everything, because they needed a bat more than a spirit guide.

But now that Vizquel is with another team, it's easy to appreciate what he's trying to do, because it has to be really damn hard. He joined the Blue Jays on a minor-league contract in an attempt to carry his Major League Baseball career into his 45th year, and he doesn't think there's anything wrong with that.

"I know what I have to do," he said. "I have to have a solid spring training."

Vizquel understands that he's being asked to prove himself again, but he figures it's worth it for one more shot. What he doesn't understand is why so many others don't think another year is worth taking a chance.

"You sacrifice a little of your pride," he said. "But I don't know why [others] don't try. If you really feel the energy, why not do it?

"It's weird to see all these guys retire, and I'm still on the field."

The good news for Vizquel is that he has company. In fact, Jamie Moyer is outdoing him at every turn -- he's in Colorado Rockies camp at age 49, and he's coming off surgery.

In both cases -- and others, like Rickey Henderson and Julio Franco -- I don't think they need to worry about keeping up appearances, because they've made it abundantly clear that they're going to play until all 30 teams tell them "no." Unlike Jose Canseco, they don't need the money or attention. There's just nothing else they'd rather be doing. They hold up their end of the bargain by keeping themselves in incredible shape, maintaining admirable enthusiasm and taking whatever opportunity comes their way.

And once they've sold their desire to stay in the game, it's hard to not get behind them, because they become the last links to bygone eras. When Franco hit the end of the line, we lost the last tie to RBI Baseball. With Vizquel and Moyer, they're the last two active players to log games at Old Comiskey, and that's why I want them to play forever.

I've constructed a highly scientific graph to document sentiment, with the Y-axis representing how much I'd be affected if a player retired: 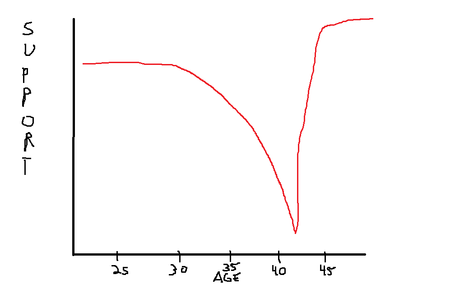 Of course, it's only fun if that player is contributing, or, at the very least, not getting in anybody's way. In 2010, Vizquel played a big part in the White Sox's turnaround, and he definitely earned a roster spot for the start of 2011. As last season progressed, it became clear that Vizquel lost the magic, and the Sox needed a roster spot to add a bat. Vizquel should have been expendable, but fortunately for him, the White Sox had no interest in making decisions of even slight difficulty.

But now that he has to prove himself all over again, I'm back on the Vizquel bandwagon. It's good for baseball history if Vizquel plays past the age of 45, but it's even better for everybody if he earns it, because there's no better example of preparation and good attitude providing auxiliary power to talent. Play on, Little O, play on.

Phil Rogers is down in Florida covering the Miami Marlins for some reason, but in his column about Mark Buehrle's new life, this surprised me the most:

[Buehrle] says that if he needs a place to stay some night, he'll crash at the condos of his former White Sox teammates. Scott Linebrink and Gary Glover are trying to earn jobs with the Cardinals and Marlins, respectively.

Gary Glover! I thought he had retired, but there he is. His Baseball-Reference.com page said he didn't play last year, but spent 2009 and 2010 pitching in the Korean Baseball League. Huh.

The transformation of Sergio Santos is a new story in Toronto, but I'm not sure what to make of this quote, if there's anything to make of it.

Sergio Santos on White Sox winter: "I guess rebuilding was just moving me and Q [Carlos Quentin] out of the way."

I imagine everybody takes trades personally to some degree, but this could very well be merely observational in nature. In either case, I'd point to the Juan Pierre-Scott Podsednik battle taking place at Phillies spring training as what the White Sox are really getting away from.