Rewatching Philip Humber retire all 27 Seattle Mariners in order for the 21st perfect game in the history of Major League Baseball, I was Humberstruck by just how well he commanded his fastball.

Sure, his slider (which Colin covered well year ago) received the most attention of his pitches in the post-perfection analysis. However, that pitch might have gotten him in trouble against better lineups early in this game. He started the game by throwing sliders up and over the plate to the first two batters he faced. Chone Figgins and Dustin Ackley could only roll them over to the right side.

Ackley had a better read on the slider the second time. Humber threw two at him, both kind of down and in -- and kind of a bad idea against a left-handed hitter. Ackley tagged it, but Alex Rios ran it down in right field (does any right fielder in recent Sox memory make that play?).

Humber and A.J. Pierzynski caught on to Ackley catching on, and Humber wrested control away in Ackley's third try. Humber attacked him with two fastballs up and away and a changeup down and away. A good take by Ackley on the change put the count in his favor, but Humber ramped up and threw another up-and-away fastball, and Ackley popped out to Alexei Ramirez.

The first two times through the order, Humber threw a lot of unremarkable sliders, but he benefited from being able to throw them for strikes in any count. Sometimes that's good enough, even against better lineups. Often times, he used the slider to set up other pitches, and the way he struck out Jesus Montero in the second inning is a good example.

He left a slider up to Montero, but because it was on a 2-0 count, Montero couldn't pull the trigger. Humber established the slider to Montero on an odd count, and then didn't throw it again. He spotted the fastball much more precisely on the outside corner for strike two, and then got Montero swinging on a curve down and away.

Humber's fastball was much more reliable for quality strikes, and he used it to his advantage later on. He and Pierzynski flipped the script on the Mariners the third time through the order, establishing the fastball and using the curve and a much-tighter slider as putaway pitches. The pitch he used to strike out Michael Saunders to record the first out of the ninth inning might have been the best slider of his life.

And the Chicago Tribune has a pretty PDF of Humber's 27 outs (thanks to @_cvic for the heads-up).

It wasn't a shining performance for Fox, starting with the terrible blackout policy that prevented most people from even seeing 17/18ths of the game.

When Humber took the perfect game into the ninth, Fox put the nation's eyes on the White Sox. The producers seemed to struggle with the pressure more than Humber did.

For one, when Humber came back from 3-0 to strike out Saunders, Eric Karros noted an intense reaction from the normally reserved pitcher. He thought he would see it when Fox switched to the replay, and set up the clip accordingly. The replay showed the pitch, Saunders, and Pierzynski ... but Humber was out of the shot. And that was the only replay we could see. We had to take Karros' word for it.

The lack of a second angle became a bigger problem when Humber tempted Ryan into a 3-2 check-swing. Brian Runge immediately decided Ryan swung. From the center-field camera, it looked like an iffy call. Ryan was so surprised that he protested first and ran half-heartedly second. But Fox only offered one replay, and it was the same angle we'd seen -- completely inconclusive.

Thanks to Fox, objective third parties automatically connected Runge's call in favor of Humber to Jim Joyce's blown call that cost Armando Galarraga his perfect game, saying that Humber benefited from an umpire getting caught up in the moment, and not wanting to get in the way of history.

It would take a while to get a good second look. Over at Lookout Landing, Jeff Sullivan posted a .gif barrage of Ryan's swing:

Depending on which speed/angle you watch, you can draw different conclusions. But this frame (pulled from this video) seems to be the key: 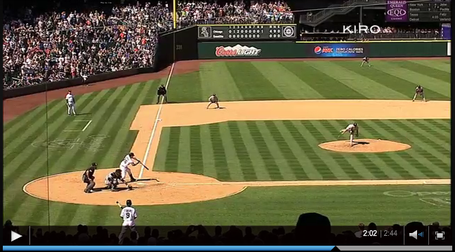 Lump in that bat position with the other elements of his swing -- he carried the bat forward with his upper body way out in front and shoulders turned, and he started taking his base before attempting to undo the body parts that committed to swinging. Taken all together, there are a lot of reasons Runge would make that call in the third inning of a 4-3 game, and nobody would think anything of it. So why wouldn't he make it in the ninth of a perfect game?

It would have been nice to get that look while everybody was watching, Fox. Alas.

*Although no individual play matched the drama of Dewayne Wise's catch during Mark Buehrle's perfecto, the White Sox played great team defense that showed players owning their positions. Rios made that running catch in right that Dayan Viciedo would have never reached. Viciedo made his own catch on a line drive to left center -- not a difficult play, but a play bad left fielders can make difficult. Alejandro De Aza called off Rios and Gordon Beckham on a high fly to the triangle in shallow right-center. And on a pop-up to the left side by Justin Smoak, Alexei Ramirez emphatically called off Brent Morel, since he had an angle that didn't involve looking directly into the sun.

*I thought Humber's defense might prevent him from ever reaching these individual heights, since he has the slowest reaction time of any Sox pitcher. He handled both plays that came his way -- covering first on a 3-1, and fielding Munenori Kawasaki's bunt -- with ease.

*If that pitch escaped Pierzynski and Ryan reached, it would have been a passed ball, and that would have changed the narrative regarding his defensive considerably. Fortunately, he got enough glove on it to prevent it from reaching the backstop, made a crisp throw to first, and then did this: 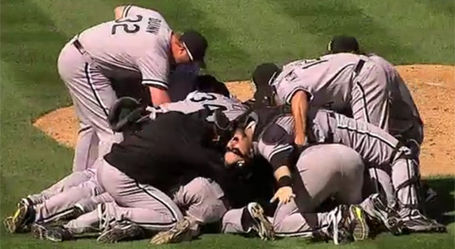 *Humber aced his postgame reaction, offering genuine emotion and insight into his performance even after getting drenched with an on-target Gatorade shower by Ramirez.

*And because it's fun, let's watch Humber's 27 outs again: