Share All sharing options for: Humber makes history: My Perfect day at Safeco

"Wish you could come with me today. I may be going alone...damn my superstition."

I sent that text message to my best friend in Seattle just before 11 AM yesterday.
She is no longer allowed to join me at Safeco when the White Sox are in town and I've been transparent and deliberate with my non-invites. She understands.
Over the past two seasons, she has attended only two baseball games: the only two Sox losses in Seattle. Heartbreakers, at that.

First on Wednesday July 21st, 2010 when Bobby Jenks blew a 1-0 save in the bottom of the 11th after a Floyd and Felix Hernandez pitching duel.
And more recently: Friday May 6th, 2011, Humber v. Felix. Humber allowed only two runs in the 7th inning; but the Mariners walked off of Thornton in bottom of the 9th of the 2-2 game.

That was enough for me. When the conversation casually came up that the Sox would be in town this weekend, I firmly reminded her that she was not welcome. Even as of yesterday morning, when I suspected I'd be attending the game by myself, her wonderful company was not worth the risk of a Sox winner.

And so I hopped on my bike at Noon and headed towards Safeco. Nearly to the park, I realized I forgot my bike lock at home. I had to turn around for it. Not exactly ideal for someone who could practically feel the previous night's Sox winner debauchery seeping (I mean, glistening) from her pores. I really didn't need my four-mile ride to turn into ten miles before my first bite of food, but alas. I quickly grabbed garlic fries and water and pulled up a sunny seat at Safeco.

I met a couple cats from work at the park. Despite the conflicting information on our tickets, we were able to sit together close to the field on the right side. Both gents moved to Seattle in the past year and didn't have a particular loyalty on the field. One of them had only attended one baseball game in his life, prior to yesterday's. I spent the first few innings telling them about this here South Side Sox community; and boring them with Sox-related ramblings ("Now, this one may be a bit of a stretch... but we call the batter Sand-Dancer... because his name is Rios and he dances on the sand!").

I remarked early and often about what quick work Humber was making of the Mariners. I requested that the M's keep on swinging at the first pitches. "Three pitches, two outs!"

In the 5th inning I noted, "He's probably only thrown 50 pitches by now", before turning around and seeing his total at 46. This observation drew the attention of the row behind us and one of the men in the row asked me if Humber had walked anyone. Nope.
Any batters even threaten a hit? Just one warning track shot.
I confirmed that yes, he - our back-of-the-rotation pitcher - had indeed been perfect so far.
One of them said, "The fact that you even know that is awesome. You may be one of two women in this park who realizes what's happening." I just turned back to the game with a smile. If they only knew!

The nerves picked up considerably in the 6th and 7th innings. I was hardly able to maintain chit-chat by the 7th. I was ready to do away with the Sox stabs at offense just to get to the bottom of the innings. My legs bounced uncontrollably, my palms were sweating, my heart had seemingly relocated to my throat. I had to remember to exhale. There was no way this would actually happen.

After the final out of the 7th inning, I stood up clapping and turned around to everyone in the section, with six fingers raised in the air. Most of the crowd had caught on and was getting into it even despite their allegiance to the Mariners. Most of them were loving it all the same, feeling the tension mounting.
Most. The guy sitting directly in front of me turned around and saw me excited and then mumbled to himself that I was in the wrong ballpark. I heard his comment, as I'm sure he half-planned. So I directly replied, "But I live here now. Deal with it, dude!"

Ooooowheee, this guy got me so fired up! Do curmudgeons like him really believe I prefer to see my team only a handful of times a year, usually as a visiting fan? He promptly began rather passively, yet overtly cheering for every strike against the Sox. So I cheered along with him, "Yeah! Get back to Humber!"
I warned my work buddy then and there, that if this guy somehow tried to shit on my elation in the event that I was celebrating a Perfecto, he was assuredly getting punched. Given the adrenaline already coursing through me and how much hate I felt for this man's cold, smile-less face, I was on edge.

Luckily, it didn't come to it. He had the gall to walk out of the game in the middle of the 9th inning. Who leaves a Perfect Game in the making?! For all the Mariners fans who stuck around in jubilation, appreciation and respect...
I kindly bid him adieu. Okay, so technically, it was a big fat sayonara! with a scowl. I could only conclude that he must really hate baseball and I was glad to have his poopy energy out of my way.

After the brutal and heart-wrenching final inning, my shaky legs finally gave, my heart dislodged from my throat, and I doubled-over sobbing with my head in my hands. What an unbelievably special thing to witness. Needless to say, nothing has come close since Buehrle turned my 25th birthday into one of the most perfect days I'll ever live.

Still shaky after the game, I retrieved my bike from the rack outside the park and started my slow ride through massive foot and car traffic on 1st Avenue. I high-fived the Sox fans I passed. I ferociously rang my bike bells and screamed "Perfection!" as I pedaled past the crowds leaving the ballpark and the people in the garden at Pyramid Brewery. A couple dudes heard me approaching and turned around with questionable looks. I responded sweetly after a short pause... "PERRR-FECTOOO!!!"
brrrrrring brrrrring!

What can I say, I've been honing this asshole for years.

I pulled over at the local watering hole to have a gin or three in celebration, before I finished biking home with an enormous grin on my face. I was anywhere between laughter and tears on the sunny evening ride, and for the rest of the day. Even later in the evening when a friend hosted me for a steak dinner boom, I found myself randomly welling up with joyful tears when my mind wandered back to the day's events.

Oh, and of course I called my best friend from the concourse after the game, to tell her what had just happened. Once she was able to decode the words stumbling out of my mouth, she shared in my delight and disbelief.
I ended our conversation in great sincerity, with words that perhaps have never before been so joyfully wept ... 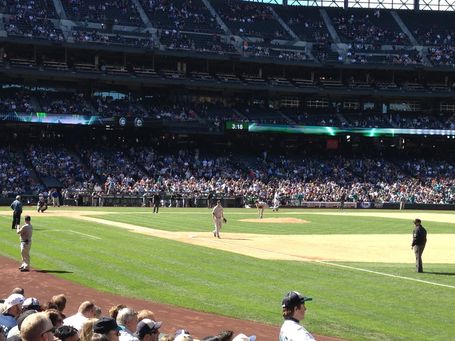 Photo taken during Humber's 9th inning warm-ups. I was hesitant to take any pictures at this point.
I snuck in this one and hoped the baseball gods didn't notice. 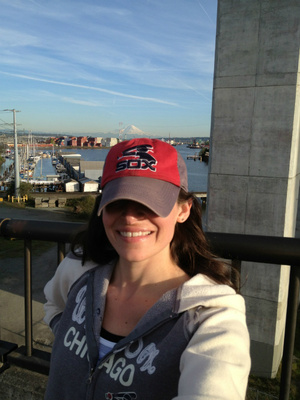 On my bike ride home, Mount Rainier shining in the background. A glorious day to be alive and "at the wrong ballpark".