Share All sharing options for: Gordon Beckham brings back the leg kick

A benching on Sunday, an off day on Monday, and the first warning issued by Robin Ventura gave Gordon Beckham plenty of time and reason to contemplate his season.

The reflection paid off during Tuesday's 7-2 victory over the Cleveland Indians. Beckham went 3-for-4 with a homer to left and two opposite-field singles. Better yet, the homer was on a fastball up in the zone. He actually got around on it, and hit it solidly enough to leave no doubt when the ball left his bat.

Now we'll wait to see if Beckham stumbled into good timing, or if he actually figured something out. To his credit, he's making the latter a genuine possibility, because he made a visible mechanical change.

OK, the title was a spoiler -- he brought back the leg kick, and you can see it in action here:

And if you crave more evidence, you can also see him use it during his RBI single in the fifth inning.

Now, this isn't the cure-all for Beckham. It's never that simple with him. He's had the leg kick through good times and really bad times, including the start of this season. He carried a 3-for-22 performance into a game against the Orioles on April 16, and after striking out in his first at-bat, he opted for a toe-tap in his second at-bat.

Although the tap-a-tap-a-tap-a didn't bear fruit that night, Beckham said it felt better:

"It was 0-for-4 last night, but it was a strikeout and then hard hit, a miss and relatively better than I've been doing," said Beckham, sitting in front of his locker before Tuesday's game. "There was a lot of progress there which people probably don't see but that I saw last night.

"I actually made a really good adjustment. And then today, I came in and they said something that reaffirmed that I made the right decision. Then we furthered that because they kind of reinforced what I did last night was what they were wanting, what they were kind of hoping would happen."

It didn't work better, though, unless going 6-for-36 was what the Sox "hoped would happen." That's what Beckham hit from the first implementation of the toe-tap through Saturday. He looked especially overwhelmed against Daniel Bard on Friday night, striking out twice with a popout in between. You can see the strikeouts on this video. He's toe-tapping. He's late. He's Bad Beckham.

So he's back to the leg kick, and that's probably for the best. He's shown he can hit with it, and while it does play a part in his (over)loading up, it's not the sole reason why his hands are late coming forward.

In fact, judging by the way he hit those Jimenez pitches, he wasn't late. He covered the outside heat on Tuesday, and that's a start. Now he's going to need to repeat that. And then he's going to have to cover other parts of the strike zone, too. And we have to filter out what Beckham says, because Beckham talks a lot. It's all about results from this point on, and hopefully Tuesday night is a prelude to a rebound everybody can believe in.

During the postgame press conference, Ventura kept his trademark poker face when asked about any particular changes Beckham may have made:

"I'm sure there's probably a little something, but I don't think anything drastic. You get to that point where maybe you're seeing it a little better, there might be a little tweak in there, but he's just looked better the last few times he's gone to the plate."

I'm guessing Ventura knows more than he's letting on, leaving us to try to fill in some gaps. So I'll just throw this out there. During Beckham's home run, you can see him standing next to Jeff Manto as Beckham makes contact:

They watch the ball jump off his bat: 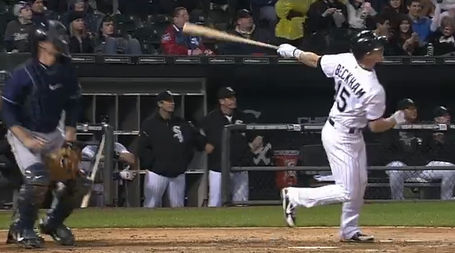 They turn to each other: 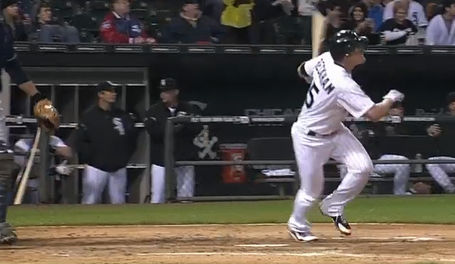 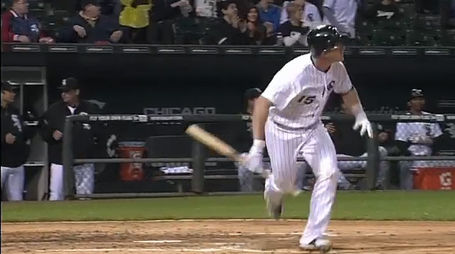 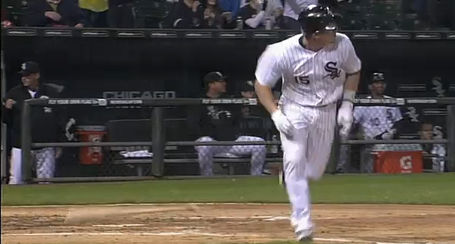 Are Ventura and Manto stoic individuals calmly celebrating a positive baseball result? Or did they expect Beckham to make something happen? It will be a while before we know anything about anything, but at this point, we'll take any sign of life as a reason for hope.