Looking for the good Gavin Floyd? Look inside

Share All sharing options for: Looking for the good Gavin Floyd? Look inside

Over that period, the Twins smacked him around to the tune of a .380/.436/.562 line. For a team not known for its power or plate patience, that's uniformly awful. That's Manny Ramirez across nine hitters.

But that table lives in the past now. He can put together something far prettier with this building block:

The ensuing three hours did nothing to dissuade me from that notion, that's for sure.

Well, that's not entirely fair to Pierzynski. Let's start by saying that Floyd just made better pitches in general. Compare his Pitch f/x charts from his two starts against Minnesota -- he was knocked out in the fourth inning on the left, and on the right, he pitched seven shutout innings:

Simply put, Floyd left far fewer pitches up and out over the plate in his second try against Minnesota. That's the simple solution.

While we're addressing the rudiments of Floyd's approach -- when Floyd flops, it doesn't seem to be related to throwing his cutter too much. I don't know if there is such a thing as "too much," at least in general terms.

In his disaster start against the Twins, he threw 23 cutters out of 84 pitches. On Tuesday, 38 of his 95 pitches were cutters. The cutter usurped his curveball as his most valuable pitch a couple years ago, so suggesting he throw it less often is like telling Mark Buehrle to reduce his amount of changeups. Basically, if Floyd's in a position where he has to go away from his cutter, he might be screwed regardless. Pitchers get beat when they throw bad pitches, and Floyd was throwing lots of bad pitches of all varieties.

I think it's more important to look at how Floyd approaches left-handed hitters. Over the last two years, lefties have widened their advantage over Floyd, and it became a major problem over his six-start slump.

And in recent years, the Twins' best hitters have all been left-handed. That poses major problems for Floyd.

On Tuesday night, however, Floyd was able to reverse his fortunes, even though the Twins were lefty-heavy once again. See if you can spot the difference between his two starts against Minnesota:

Floyd went inside more often against the lefties in his second try, and he also missed lower far more often. There's a pattern behind this development, and it correlates with the guy catching him.

In the discussion about his pitch selection two weeks ago, 3E8 pointed us to a very distinct and telling split pertaining to Floyd and his catchers. We can update it after his Tuesday start:

Most of those numbers can be dismissed by the sample-size discrepancy if you're skeptical, but look at that last column. Floyd has hit just one batter over the 10 starts caught by Pierzynski. In his five starts caught by Flowers, Floyd has plunked eight batters. And that might be a point in Flowers' favor.

It's the result of Flowers setting up inside far more often than Pierzynski. While we've only looked at a bad Floyd start with Pierzynski on the mound, it carries over to other Floyd-Pierzynski starts, regardless of results. Check out the charts from Floyd's 6 1/3 shutout innings against the Cubs on June 20, you'll see the same pattern against lefties: three-quarters of his pitches are on the outer half of the map.

With Flowers catching, Floyd seems to pitch inside with more conviction. Take the way he pitched Ryan Doumit in his first two at-bats. 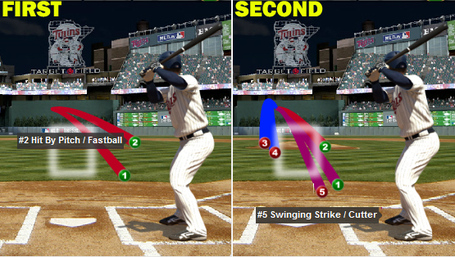 In the first at-bat, Floyd missed low and inside for ball one, and it was inside enough that Doumit tried faking his way onto first base, claiming it clipped the fabric over his shin. On his next pitch, Floyd made sure everybody knew Doumit felt something. It hit him in the hip.

That development did not deter Floyd from pitching Doumit tight again the next time. He missed inside with his first two pitches (cutter and fastball), but he came back by flipping two backdoor curves to even the count. At that point, Floyd had widened the concept of the strike zone considerably to both Doumit and home plate umpire Mike Everitt. So on the fifth pitch, Floyd came back inside with a cutter, and Doumit swung over the top of it for the strikeout.

He attacked Joe Mauer with the same method for two strikeouts in his first two at-bats -- emphasizing inside the first time, and inside setting up outside the second time.

This makes it all sound so incredibly simple, and we know it isn't. Floyd has to hit those inside targets, and he falls into slumps with his command. For all we know, Pierzynski has the same game plan, but then he sees something that makes him call an audible to away-away-away. Pierzynski did catch Floyd's best start of the year against Kansas City on May 11, and Floyd pitched inside to lefties plenty.

But it sure seems like Flowers is more persistent about setting up inside. And then there are a few other minor differences between the catchers that might make Flowers a better battery partner. For instance, the pitch maps this season show that Floyd is more prone to miss low (those "good misses") with Flowers, which brings to mind what Don Cooper said last season:

"[Pitchers] love the way [Flowers] sets up, down and low,’’ Cooper said. "The biggest thing for me is how low he gets. How he gets low to both sides of the plate, how he moves inside when we want pitches inside. We try to train the pitchers to hit the glove. When the glove is low, when it gets in, that’s something we’re going to be demanding from A.J. We need that from A.J. Tyler has done a fantastic job.’’

And then you add in the way Pierzynski threw Floyd under the bus last year for his problems throwing out baserunners, and the way he expresses frustration with Floyd behind the plate when Floyd falls out of his game (those throws back to the mound gain velocity as the innings get longer). And then consider the way Cooper is criticized for being too protective of Floyd, and hey, maybe Flowers' temperament is more Floyd's speed.

Or maybe I'm talking out my butt, so give those intangibles factors whatever weight you want. Really, the stats and data alone make a compelling argument for Flowers to catch Floyd for the forseeable future. The proof is in the plunkings, and Floyd isn't the one hurting from them.