White Sox issue Veal recall, and other news from Toronto

Share All sharing options for: White Sox issue Veal recall, and other news from Toronto

A few brief bulletins before the White Sox open a four-game series in Toronto:

Donnie Veal will rejoin the Sox to take Jordan Danks' spot. Veal looked great when the Sox tried him in July. In fact, it would be hard for him to look better, as he retired all five batters he faced, and three by strikeout.

He picked up where he left off upon returning to Charlotte. In three August appearances, he's allowed one hit and zero walks over four innings, striking out five.

That said, he seems to be mostly redundant with Leyson Septimo, and Septimo is the one reliever Robin Ventura hasn't used all that often, due to the amount of close games and Septimo's tendency to completely lose the strike zone. But it's hard to read anything into one roster move to cover four games.

Also, if you haven't seen the commercials by now, Tom Paciorek will rejoin Hawk Harrelson in the broadcast booth for the Toronto series. Steve Stone is taking the series off, so, you know, speculate wildly why he would be reluctant to try crossing the border. 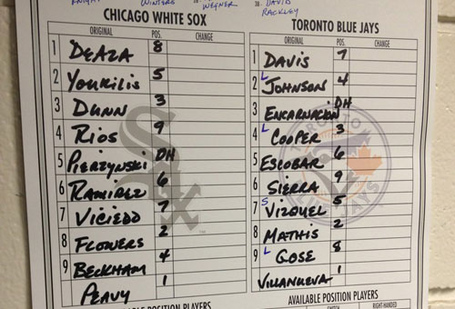