Tonight's game ended with two Mariner outfielders lying against each other back-to-back on the warning track in right-center, the ball resting in medium center, and a pitcher who saw three runs and two inherited runners cross the plate in two-thirds of an inning getting the victory.

And that's how the worst loss of the season turned into the dumbest win of the year.

The Sox led this one 7-2 going into the top of the ninth. There was a bottom of the ninth, as the Mariners scored six runs, starting with a solo homer off Philip Humber, and ending with a two-run single by John Jaso on an 0-2 fastball by Addison Reed. The go-ahead run came in because Alex Rios' fruitless attempt to cut down a runner at third got past Kevin Youkilis.

Robin Ventura probably started it by lifting Humber after a one-out walk in a 7-3 game for Donnie Veal. That added an element of uncertainty earlier than necessary, and bringing in Veal merely turned switch-hitting Trayvon Robinson around. While Reed warmed in a hurry, Veal gave up a double, which compelled Ventura to call on the closer. It seemed like he slipped down the Tony La Russa Hole when there wasn't a need.

But Seattle had closer issues of its own. The bottom of the ninth started innocuously when Tough Tom Wilhelmsen got Gordon Beckham to hit a weak grounder to the left side. It was perfectly placed in the hole, and Brendan Ryan didn't have a shot at throwing out Beckham even if he hadn't fumbled the exchange.

Then Dewayne Wise came to the plate with the intent to square around, which seemed silly since lefties are the ones who should be taking swings off him. But a funny thing happened -- Wilhelmsen couldn't locate his fastball, and didn't even give Wise a reason to try bunting.

With runners on first and second, Wilhelmsen went to his curve against Kevin Youkilis. That plan worked well enough to freeze Youkilis into a 2-2 count. But then Wilhelmsen tried sneaking a low, outside-corner fastball past him, and Youkilis rifled it right past him into center field to tie the game at 8. He should've stuck with a curve.

Adam Dunn, who had two homers in the game, looked like he might have a third. He hit a high fly to left. Hawk Harrelson urged the ball to stretch, and then Wise to tag. Neither happened, as Robinson caught the ball on the warning track for the first out, putting the inning in jeopardy.

On the next pitch, Konerko hit a deep drive to right center. Harrelson once again bellowed encouragement, and once again a Seattle outfielder had a read on it. Eric Thames had the ball in his glove, but Michael Saunders collided with him before he could secure it. The ball whipped out of his glove and into center field as the White Sox spilled out of the dugout and waved Wise home to win a game just as easily as they lost it.

Jake Peavy neither won nor lost this game, which wasn't part of the plan. He pitched well, holding the Mariners to two runs over seven innings. The runs were quick, too. The Mariners scored their first run on two pitches (double and a single), and a two-out Robinson solo shot in the second.

Bad Peavy didn't hang around for long. He was able to mix in his slider more effectively afterward, and had himself a nice

Besides, he finally had support. Each time the Mariners scored, the Sox answered. Dunn hit a solo shot off Jason Vargas in the first inning, and Alexei Ramirez dropped in an RBI single to left center to re-tie the game at 2 after two.

And then, as the Sox usually do against Vargas (four starts, 6.93 ERA) and the Mariners (21-4 vs. Seattle since 2010), they piled it on. Dunn outdid himself with a 453-foot blast to deep right center to give the Sox a 4-2 lead in the third, and Ramirez came through with his own two-run homer in the fourth.

A.J. Pierzynski tacked on a sac fly off Josh Kinney in the sixth as Peavy turned in his 19th quality start. Still, he remains stuck on nine wins.

Fortunately, baseball is a team game. With tonight's victory, the Sox stretched their AL Central lead to 2 1/2 games and reached a season-best 14 games over .500. If every subsequent victory is even nearly this difficult, the high-water marks may be tinged with a crimson hue. 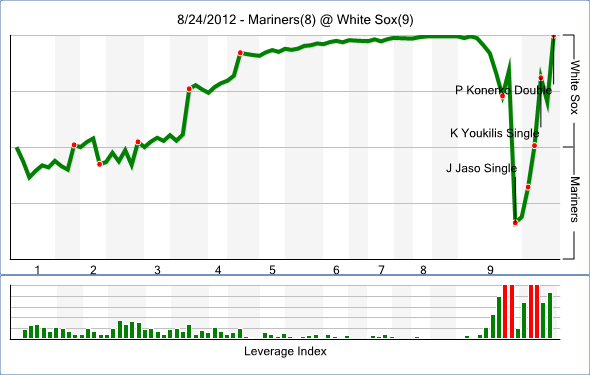