Share All sharing options for: White Sox 5, Mariners 4: Ejections get game on track

Most of the time, an ejection is sound and fury signifying nothing.

Tonight, A.J. Pierzynski and Robin Ventura received dual heave-hos, and it seemed to change the course of the game.

Home plate umpire Lance Barrett wasn't biggest reason why Jose Quintana allowed three runs over a 42-pitch first inning. The absence of his slider was the culprit, and his fastball command wasn't much better.

But Barrett's strike zone was awful. No, it was worse than awful -- it was one-sided. Adam Dunn struck out with a runner in scoring position in the first inning thanks to a pair of backdoor Blake Beavan curveballs that stayed outside of the plate the entire time, and the zone remained sketchy until the third inning: 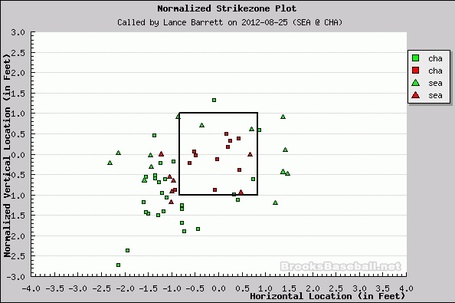 With Justin Smoak at the plate, Pierzynski caught a Quintana fastball above the knees and over the plate. Barrett called it a ball, and Pierzynski took a second to hold the ball in place before throwing the ball to the mound. He then said something to Barrett without turning around, and Barrett had heard enough. He ejected Pierzynski, and Barrett would run Ventura when he defended his catcher.

(Crew chief Jim Joyce intercepted Ventura pretty quickly, and there was plenty of contact between the two of them, but it didn't look like any of it was initiated by Ventura.)

The Sox were without their manager and their catcher, but that trade-off may have been worth it. From that point on, Barrett made far fewer head-scratching calls behind the plate. And Pierzynski's replacement was pretty good, too.

Quintana set a career-high with four unintentional walks, and they all came in that first inning. He settled down nicely afterward, retiring 13 of 14 at one point, and was able to last 5⅔ innings before giving way to Nate Jones, who threw all of one pitch to end the two-on, two-out threat.

But that one pitch was good enough to give Jones the win. The Sox had chipped away at that 3-0 deficit with singles by Paul Konerko and Alex Rios, until they broke off a bigger chunk in the bottom of the sixth.

Tyler Flowers led off the inning with a line-drive shot to left-center for his fifth homer of the year, tying the game at 3. Alexei Ramirez followed with a double (assisted by Trayvon Robinson whiffing on cutting it off). Eric Wedge called for lefty Charlie Furbush for the two-out-of-three lefty scenario.

Jordan Danks did his job, hanging in and hitting a grounder to the right side to move Ramirez to third. Gordon Beckham failed by popping out, but Dewayne Wise picked him up, drilling a liner back up the middle to give the Sox a 4-3 lead.

They added an insurance run in the eighth inning, and Flowers played a key role again. After Rios led off with a double, Flowers failed to get a bunt down over the first two strikes. But Mark Parent kept the bunt sign on, and Flowers -- who looked pretty terrible when he bunted the previous attempt foul -- was able to roll one all the way to third base. With Kyle Seager playing back, Flowers had his sixth infield hit of the year. Rios moved to third, and came around to score on Ramirez's sac fly for a 5-3 lead.

The added padding proved important when Addison Reed gave up a two-out solo shot to Seager in the ninth inning, cutting the lead to one. Justin Smoak dropped a jamshot single into right field to keep the game alive (Rios had a bad read), but Reed got John Jaso to pop out to Kevin Youkilis to close it out. Seager accounted for all four runs, tagging Quintana for a three-run shot in the first.