Share All sharing options for: Injuries piling up, subtracting from White Sox offense

The White Sox lineup reminds me of Jermaine Dye toward the end of his career. At or around 100 percent, there's a lot to like. At 75 percent ... it's a lot closer to 0 percent.

Given what we've seen the last two days -- two whole runs against starters who combined for a 6.08 ERA, and one more against the bullpen -- it's pretty clear why Robin Ventura would rather take his medicine during a winnable series* than risk having two or three starters missing for any length of time.

(*If you listened to Hawk Harrelson, you'd think the odds were against a White Sox series victory. It was funny, hearing Hawk on ESPN Radio 1000 a couple days ago, he said that the biggest difference with this year's team is that Ventura has them entering games expecting to win, rather than hoping to win.

That sounds too simple to really hang anything onto, but the irony was thick when Carmen, Jurko and Harry asked him about Bruce Chen, and here comes the "he always beats us" talk. Not that what Hawk says has any bearing on the outcome of the field, but it sure saps the energy and enthusiasm out of the broadcast. I took a nap after Wednesday's game and woke up at 6:30 a.m.)

It's not just that four White Sox players needed time off this week -- it's that it's four of the White Sox's five most important position players.

*Paul Konerko suffered a mild concussion after taking this elbow to the head from Jarrod Dyson:

When you consider the fastballs from Carl Pavano and Jeff Samardzija that hit Konerko in the face, and the other ones that hit him in the shoulder area, it seems like other teams take the "cut off the snake at its head" phrase literally. Actually, they're aiming for the head of the head, even if it's by accident. Konerko looked dazed after the play, and couldn't be found in the clubhouse or the dugout around gametime, so the early claims of a sore back or general soreness didn't seem to tell the whole story. There it is.

Ventura hasn't ruled out using the seven-day DL to make sure Konerko avoids complications. That would certainly force lineup complications, but that's the lesser priority.

*Alex Rios said he had been playing with a sore back, which makes his recent run all the more impressive (maybe it encourages him to be upright in the batter's box). But after one big hack against Chen in the fourth inning of Tuesday's game, it barked at him more than Chen barked at his catcher to defy physics and snag a foul ball before it hit the screen. 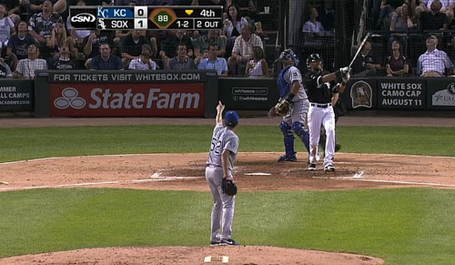 Rios sounded confident in his ability to bounce back from it:

"It’s been going on for a few days, but yesterday it got stiffer,’’ Rios said. "But I don’t think it’s something that’s going to keep me out of that lineup for more than a day or so. I’ll be fine.

"It’s something that you should just take a day and tomorrow we have a day off so that will be two days. Then, I’m going to come back better and I don’t have to take any other days off.’’

(By the way, Google Alex Rios, and enjoy the picture linked to his biographical information.)

*Kevin Youkilis sat out of Tuesday's game, and that was the biggest surprise, in that there was no one on-field incident that gave it away. No, it was just a sore right knee that had been acting up more than usual, and it required a day off.

He returned to the lineup, batting anywhere but second lower than third for the first time in his Sox career. He went 0-for-4 from the cleanup spot, but he did make a rather nifty pick while charging a short hop.

*Alejandro De Aza also returned to the lineup on Wednesday after missing two games with back stiffness resulting from this slide: 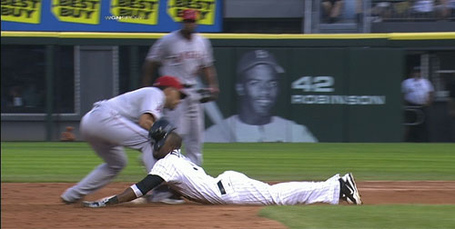 De Aza lay face-first on the ground for half a minute before slowly rising to his feet, step by agonizing step. That has become his trademark -- a rough-looking play leaves him in a crumpled heap, Herm Schneider runs out and tells him to walk away from the light, and after grimacing and groaning, he's able to get a hold of the situation.

It's not entirely becoming of him, but this one did look painful. He'd be better served going into second feet-first, because he dives into the bag with a lot of speed, and without an idea of where the ball, feet or knees are. He's been drilled in the head and ribs with throws earlier this year, and Maicer Izturis' knee did the most damage yet.

But hey, when he reentered the lineup on Wednesday, he went 2-for-4, and made this impressive running one-hop throw to first for an 8-3 double play. I'll take De Aza looking like death for a minute or two on the field, because unlike many of his teammates, he doesn't carry the looming weight of the mortality of man into the batter's box.

It's not as bad as it could be, because this Scott Merkin tweet will send shivers down your potentially herniated spine:

Robin joked that they had a lineup made with no De Aza, Konerko, Rios and Youkilis before De Aza and Youkilis said they were ready

Sure, Ventura "joked" about it. But I doubt he was laughing much while trying to figure it out, because South Side Sox obtained this cell phone picture of one of his discarded attempts: 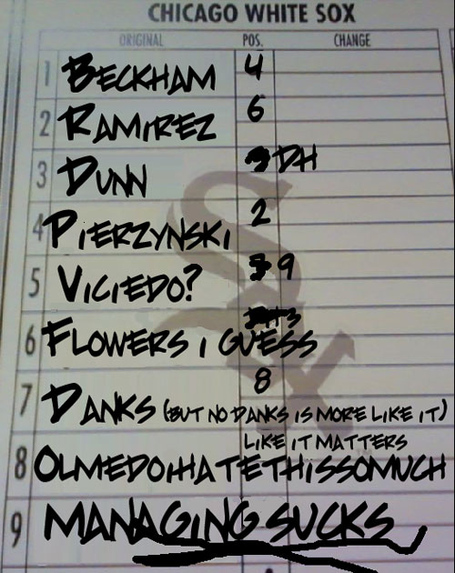