How Jose Quintana beat the Tigers

Share All sharing options for: How Jose Quintana beat the Tigers

When we last left Jose Quintana, we noticed two glaring absences across the two disastrous outings that preceded his start on Monday night:

So, after throwing 7⅔ innings of one-run ball in what could be the biggest victory of the year, did Quintana address these deficiencies?

Cumulatively, the answer is a resounding "Kinda!"

Let's start with the second one, because Quintana definitely made strides here. A.J. Pierzynski started the night setting up outside, and didn't drift inside all that often -- especially relative to Quintana's usual frequency.

That's not to say he always hit the mitt. Over the first three innings, he still had a tendency to move the target in to right-handed hitter, which was sometimes over the heart of the plate. The Tigers had their chance to knock him out in the third inning, but Miguel Cabrera grounded into a double play.

Quintana found his footing afterward, and his appearances against Delmon Young are a fine representative of his ability to pitch to the target as the game went on.

And when you look at his pitch map, you can see just how much Quintana stayed away: 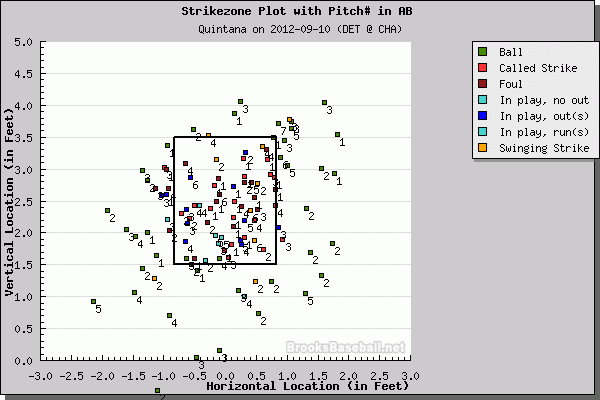 In his previous start, Quintana only had two pitches miss well off the outside corner to right-handed hitters, so that's the most obvious way to point out the change in his approach.

On the other hand, when it comes to pitch variety ... well, Quintana didn't really have much of that. He threw 83 fastballs out of 111 pitches, so there wasn't a whole lot of mystery. However, when he did deviate from the heat, he did mix that up more than usual, including the return of his cutter. Adding onto the third pitch numbers from before:

That doesn't seem like a combination that can win a ton of games, but it's similar to how he attacked the Red Sox over eight shutout innings in July. It also worked against Tigers, perhaps because he escaped the rut he was trapped in over a month of increasingly ineffective outings.

It also helped that he manhandled Cabrera. In three head-to-head matchups, he racked up two strikeouts and two double plays (there's overlap with the White Sox's ninth SHOTHO of the year). Chances are, if you face one of the league's best hitters and get five outs in three tries, the rest of the outing will be a little bit easier.