The unfathomable sadness of Samuel Deduno

Share All sharing options for: The unfathomable sadness of Samuel Deduno

In the third inning of Saturday's White Sox winner, Samuel Deduno gave up a two-run homer to Paul Konerko, which extended the Chicago lead to 3-0. Two pitches later, Alex Rios ducked to avoid a pitch hurtling toward his helmet. 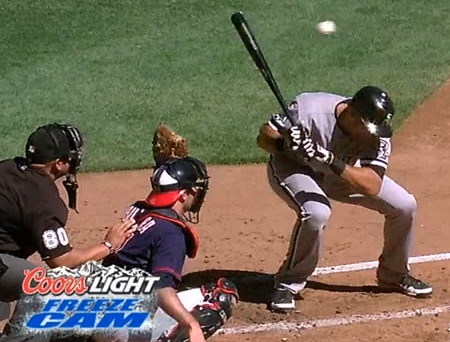 Twins pitchers have thrown at White Sox hitters before, but Deduno offered a mound (ha!) of evidence to suggest the pitch bore no ill intent.

If you were watching the whole time, you would have noticed that Deduno had no concept of the strike zone. Gordon Beckham saw the ol' low bridge a couple times, and Deduno would have drilled Alexei Ramirez with a 3-0 pitch, except when Ramirez takes all the way, he Takes All The Way. Leaving the batter's box prematurely saved his life. Or at least his elbow.

But if you hadn't witnessed Deduno's earlier wildness, you still wouldn't think he meant to throw at Alex Rios. His immediate reaction to the purposeless pitch made him the saddest pitcher I've seen since Sean Tracey. And his effort to get it together after Joe Mauer's Drew Butera's mound visit might have pushed him past Tracey Territory.

GIFs below the jump.

Baseball-Reference.com identifies three major leaguers who were given the nickname "Sad Sam." The most famous is Sad Sam Jones, who won 229 games over his 22-year career, the last four of which he spent with the White Sox. According to his SABR BioProject, it didn't take much to get the moniker to stick:

The Associated Press obituary explained the origin of his nickname, "Sad Sam, the Cemetery Man," as emanating from "a new sportswriter whose only acquaintance with the pitcher was watching him from the press box. The dour features of the pitcher at that distance completely hid the twinkle in his eye."

The lesson: Back in the day, people really took other people's word for it. In this case, we have GIFs for it, so based on precedent, there is more than enough material for us to turn Deduno into baseball's first Sad Sam(uel) since 1952. We just have to want it enough.