In explaining his ill-fated decision to call on Leyson Septimo for Prince Fielder duty last week, Robin Ventura feared giving the hefty lefty too many looks at Donnie Veal:

"Yeah, there just becomes a time you’re using Donnie every night and you end up using him later," Ventura said of Veal, who retired Fielder on a fly to center to start the ninth. "Prince has seen him a few times now. You’re looking for a different look."

Veal had held Fielder hitless in each of their first three contests, but Ventura thought a fourth over such a short time frame would be pushing it. Alas, try as Ventura might, he was forced into a fourth face-off later that game, unfortunately at a less crucial juncture. Veal retired Fielder yet again with a flyout to center.

He learned his lesson. Five days later, Ventura had to dispose of Fielder for hopefully the last time this season. The White Sox clung to a one-run lead in the seventh inning. Ventura didn't want Nate Jones trying to fire fastballs past Fielder, so he went back to what worked, hoping that Veal magic would last at least one more day.

Fielder looked as bad as he's ever looked.

Oh, those Veal sliders did not agree with Prince:

Those are three terrible hacks -- or actually, two terrible hacks spread out over three attempts to swing -- resulting in a five-pitch strikeout. If you only looked at the Pitch f/x data, you'd wonder if A.J. Pierzynski had just watched Bloodsport the night before and threw Diamond Dry in his eyes. Here's what the pitches looked like in cold hard plot points: 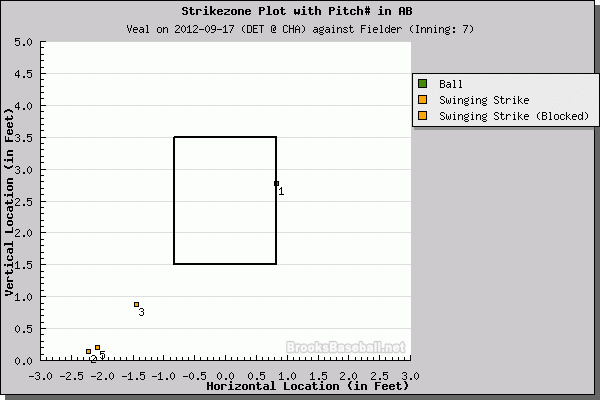 As Veal himself said after the game, he didn't have much of a plan in attacking Fielder:

That he did, and now Veal has held lefties hitless in 25 plate appearances (0-for-24, one walk, 12 strikeouts).

The extent of Veal's success might be the most inexplicable part of a season rife with remarkable occurrences. From what we knew of Veal prior to this point, he had the makings of a so-so LOOGY. As much as any southpaw with decent heat, a breaking ball, and a decent idea of where either pitch is heading, anyway.

I suppose you could say he offered a little bit of mystery. He underwent Tommy John surgery in June of 2010, which means you could write off his unimpressive 19 innings in the minors at the end of the 2011 season.

Still, there's nothing that suggested Veal had this in him. He battled command problems from the start of his career and his days as a highly regarded prospect. And even this year, when he seemed to straighten out some of his issues in the Charlotte bullpen, he still didn't stand out as a prime LOOGY candidate. Hell, as a reliever in Charlotte, lefties had more success against him than righties:

And while Kenny Williams thought enough of Veal's potential to pluck him out of minor-league free agency and put him on the 40-man roster last November, the big reveal (ha) took its time. Here's the list of all the lefties that pitched in relief before Veal: Matt Thornton, Hector Santiago, Will Ohman, Chris Sale, Jose Quintana, Eric Stults, Leyson Septimo.

Given all the guys who took a shot at specializing before Veal, it's difficult to frame the signing as some kind of masterstroke. Every team wants to stock up on interesting lefties, and the Sox just happened to be the team to sign this particular one.

But the Sox do deserve credit, as they have in other areas, for swapping out parts that don't work until they find something better, even if it costs them a decent chunk of change as the Ohman DFA did. Three guys couldn't cut it as a second lefty, so they tried a fourth and struck gold.

As is often the case when writing about fluke-looking success stories, this post could catch Veal at his peak. Certainly there isn't much room for him to improve, and Ventura is rightfully aware that regression exists based on that quote at the top.

With 16 games left, though, the rest of the season is a small sample. Overexposure concerns are minimized by the fact that three of the four remaining opponents have not seen him. Veal has only pitched against the Royals (Alex Gordon is 0-for-3 with two strikeouts; Eric Hosmer drew the lone walk).

And in the small sample Veal has already put together, hitters haven't gleaned anything from a second or fifth look. That's why I keep coming back to Fielder. Few hitters cover the plate better, and he's a lefty who isn't a liability against other lefties (.276/.350/.429 this season). Yet Veal, facing a guy Ventura called the smartest hitter in the game for the fifth time in two weeks, lured him into offering at garbage not once, not twice, but thrice for the TKO.

Shrug and smile. At this point, Donnie is in his element as the world's best LOOGY, and hitters don't have too many more chances to tell him otherwise.