The limitations of Jose Quintana

Share All sharing options for: The limitations of Jose Quintana

The homestretch hasn't been kind to Jose Quintana. After spending most of the season under heaps of praise for being one of the White Sox's most pleasant surprises, he's spent the last week peeling himself off a pair of walls. He ran into one in the fourth inning against Baltimore on Aug. 30, and then smashed into another in the second against Minnesota on Tuesday, leaving him the proud owner of the Sox's shortest start of the season.

Between Birmingham and Chicago, Quintana has now thrown 163 innings. He entered the season with a previous career high of 102, so that's the first question Quintana faces after every poor start. He isn't ready to give in:

"I wouldn’t say I am hitting a wall," Quintana said through an translator. "It was just a horrible night for me. There are some things I need to work on as I continue to learn." [...]

"Yes, definitely this is uncharted waters with the innings I have pitched," the 23-year-old Quintana said. "I don’t feel there is anything going on with my arm not being strong or just being weak. There are some things I am not doing right."

Quintana's radar gun readings would agree with that assessment, because there is no correlation between his success and his velocity:

Of course, his average velocity from Tuesday is up because he was yanked in the second inning, so he didn't have the in-game wear dragging it down a bit. But even when looking at his somewhat down readings from Aug. 30, they're just about identical to how hard he threw during his eight shutout innings in Boston on July 19.

So the most obvious sign of wear-and-tear has nothing to offer, and that's a big part of the battle. On two other fronts, though, he's trying to more with less. It's difficult to tell if it's all by design, but it's not really working either way.

The first is pitch selection. At the start of August, Quintana threw two kinds of breaking balls -- a cutter in the high-80s (some call it a slider, but we'll stick with one term), and a curve in the low 80s. He also mixed in the occasional change.

But over his last few starts, the cutter hasn't really been there, and he's not really bothering with a change, either. Here's the count of pitches that are neither fastballs nor curveballs (aka "third pitches"):

Now, if you do a little more exploring, you'll see some endpoint problems in play. For instance, on July 30 against Minnesota, he threw five "third pitches" out of 99. That might have been a conscious decision, because he'd faced the Twins the start prior, and he had more of a traditional mix of pitches (23 cutters, three changeups).

We can take the time here to acknowledge one big element of regression -- teams seeing him for the second and third time. But it seems weird to charge headlong at that challenge with fewer weapons in the arsenal. It might work if he had two killer pitches, but that's not the case here.

So he's throwing fewer pitches, and that doesn't mesh well with his tendency to ignore a big part of the strike zone. This chart from his last disaster basically illustrates the point: 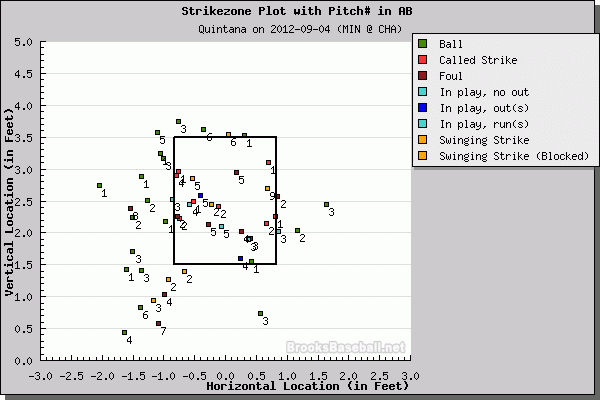 Specifically, look at the right side of the strike zone, which would be the outer-third to right-handed batters. It's a side of the plate he doesn't really use, especially in extended at-bats. As the pitches pile up, Quintana keeps trying to get the fastball in, and the curve down and in. Right-handed hitters can fight off what would normally be pretty difficult back-foot breaking balls because they're ready to dig for them.

(You can also look at this chart from his prior outing against Baltimore, because there's the same problem. It's even more pronounced because he threw more pitches.)

That part of the strike zone goes largely neglected for a reason -- he doesn't have much of a changeup, and apparently he doesn't have the faith to really even show the one he has. Maybe he could get more little more adventurous with it, but for all I know, hitters might see those pitches with a giant "KICK ME" sign taped to them.

Along with the lack of a credible changeup, he also isn't showing a consistent ability to backdoor his curve, or what's left of his cutter. When you think of the very good Sox lefties over the last several years -- Mark Buehrle to John Danks to Chris Sale -- they had an ability to work inside and outside with multiple pitches.

Quintana isn't quite there yet. In fact, he looks like he's getting further away, and that could be the sign of tiring. Fatigue doesn't only manifest itself in velocity, but it can take away from sharpness, both in terms of movement and command.

But that doesn't quite cover the narrowing of his pitch selection, and his ability to add and subtract off his breaking stuff. That's the part I think Quintana (or A.J. Pierzynski, or Don Cooper) might have a more specific answer for. He could be wearing down after all, but he might never admit he's tiring to the media, and he might be smart for doing so.