Only 63 to choose from, but a lack of offense made practically every game a nail-biter

Share All sharing options for: The top 10 wins of the 2013 White Sox season

While the White Sox only won 63 games on the season, picking a top 10 list was harder than it seemed. The league's worst offense simply didn't allow for comfortable, drama-free victories.

But there were some legitimate gems among the garbage, even if some were more remarkable for their lack of mistakes. Here are my top 10 White Sox winners from the season: 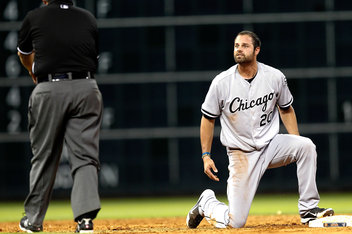 The White Sox were honored to host the Civil Rights Game, and they played it with pride. Hector Santiago went toe-to-toe with Yu Darvish and battled him to a draw, setting up Josh Phegley's line-drive single to left for the walk-off victory. (Santiago also drilled Pierzynski in the back.)

In the 62nd game of the year, the White Sox finally reached double digits in runs, and Adam Dunn did the heavy lifting. He went 4-for-4 with two homers, a walk and five RBI and the Sox offense used Chicago weather to their advantage. A thick fog delayed the game for 70 minutes, and it offered the setting for some fine photography, as well as one of the quotes of the year from the struggling starter:

Axelrod on the fog: "I didn't see all those home runs go out so that was cool."

In other seasons, this victory wouldn't come close to making the cut. In 2013, when sound defense, terrific baserunning by Alejandro De Aza and Alex Rios, and a game-saving, home-run robbing catch by Casper Wells preserve a victory for Jose Quintana (even though he didn't finish six inning that day) ... well, you take notice of that one.

The White Sox overcame two blown calls by D.J. Reyburn in the ninth and 10th innings to pull off a three-game sweep of the Royals in Kansas City. It featured quite a bit of history -- Addison Reed's sixth save in as many days, Jake Petricka recording a double play on the only batter he faced and earning a win in five pitches, and Hawk Harrelson's most disorienting home run call of the year.

The White Sox scored 12 runs for the only time all year, and the support found a worthy cause in Erik Johnson, who picked up his first major-league victory after getting sabotaged by terrible defense in his previous attempts. This game was literally the best the White Sox could do.

The White Sox didn't play Detroit until right before the All-Star break, and given the disparity in the standings, I'm sure the Tigers didn't expect the Sox to beat up Justin Verlander for just the second time in 14 starts. Rios made history in the process, going a perfect 6-for-6 for the fourth six-hit game in franchise history.

(Companion game: The Sox's 9-1 victory over Kansas City on June 21 in which they thumped Jeremy Guthrie.)

Wearing the 1983 doubleknits for the first time all season, Dayan Viciedo made them pop when he launched a screaming line drive into the left field seats for a walk-off solo shot. The White Sox closed out the first homestand of the season with a 4-2 record, which sadly stood as the season's high-water mark.

Chris Sale bedeviled the Tigers throughout the season, and never more so than the first inning of this game, when Miguel Cabrera couldn't check his swing on a pitch that hit him, and earned a hasty ejection before he completed the at-bat. Sale went on to throw eight sterling innings, and his teammates joined in the fun to deny Max Scherzer his 20th victory. Thoughts, Chris?

But Sale saved his best work for a Sunday Night Baseball showcase against the Angels. Wearing the Winning Ugly uniforms under the lights, Sale never looked better. He carried a perfect game through 6⅓ innings before Mike Trout broke it up with a single. That was the only blemish on his night, as he threw a one-hit shutout -- and a Maddux as well (98 pitches).

The White Sox honored Mariano Rivera before the game, then sullied his season in the ninth inning. After Rivera retired the first two hitters, he gave up a double to Gordon Beckham, followed by a single through the left side on an 0-2 count by Dunn, of all people.

But a second comeback was in order after Axelrod gave up a solo shot in the top of the 12th, and the Sox found a little more two-out magic. Tyler Flowers reached on an infield single, moved to third on an Alexei Ramirez single, and both scored on De Aza's deep drive to right-center for the rare walk-off triple. That sealed an unlikely sweep of a team that couldn't ultimately absorb one, and the Sox went 20-36 the rest of the way.