It's not a Hall of Fame, but it's a different kind of amazing that's a lot closer to home.

Thanks to the events of the first 22 years of my life, I wound up moving to northeastern Kansas. This results in me driving through Kansas City at least four times a year. Other than the building housing the Kansas City Star, it is not a visually impressive city. Growing up in Chicagoland spoiled me I guess. I wound up taking a different route home than usual back in December and wound up seeing an exit sign I had never noticed before instructing me to turn off I-70 and head to the Negro Leagues Baseball Museum. I was fortunate enough to be able to ignore the siren's song that day, as the museum happens to be closed on Mondays and I did not want to get back to Plainfield at 9:30 that night. But the seed had been planted and my return trip became planned around a temporary respite at 18th and Vine.

Until you hit the main drag, the neighborhood around the museum feels kind of like Bridgeport. Had my phone lied to me about where I was going? It wouldn't be the first time the little bastard sent me on a wild goose chase through KCMO. But the sight of an Arthur Bryant's nearby reassured me to keep going. I rounded the corner, discovered that parking everywhere is free, and asked a man in a security jacket on the corner to point me to the museum, establishing the awkwardness that is asking an African-American man to point you towards a place with the word "Negro" in the name. I quietly asked to be pointed towards the baseball museum. He laughed and sent me happily on my way.

The first thing that greets you upon entry into the lobby is a multitude of signs informing you that any cameras you may have brought with you aren't making it through the lobby. I don't own a camera, but decided my cell phone would stay in my pocket as I'd rather not add this hallowed ground to the relatively short list of places I've been thrown out of, even though it would instantly be ranked number one in terms of classiness. After convincing the woman at the ticket booth that I was not interested in seeing the American Jazz Museum the same day, despite the discounted rate, I paid my $10 and walked through the door.

There is a baseball field to your left. You're essentially in the right field stands, staring out at the bronze statues of ten men playing a game. I started trying to guess who each statue was, hoping to eventually run into a plaque congratulating me on being able to guess the three easy ones. I stood next to the replica of Buck O'Neil and stared out at the field. The rest of your trip through the museum forces you to keep staring out at that field, but not be able to get on it. The sentiment and symbolism was not lost on me. 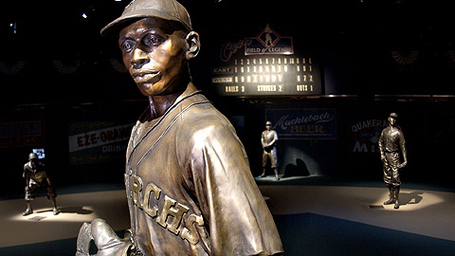 So I started my trek through the building with a 15 minute video narrated by James Earl Jones about the Negro Leagues and the men that populated them. After that you start inching slowly along the walls, covering decades of not only baseball history, but American history as well. You read old newspaper articles and see more than a few ... we'll call them "insensitive" and be charitable ... drawings and cartoons of African-Americans playing our favorite sport. You're going to feel uncomfortable a few times, especially in the earlier exhibits. You'll likely get a little angry reading about Cap Anson and the generally awful ways he used his clout to keep integration at bay while he was a star. You'll read about the struggles the men faced even after Rube Foster organized the Negro National League.

But then something happens about halfway through the winding halls. The various leagues start booming in popularity. The Kansas City Monarchs become the Yankees of their "separate but equal" world. You start reading anecdotes about white owners of the teams fighting ignorance as best they can through their players. The Monarchs were once denied hotel service and food in a town they had already sold out all the tickets for their upcoming games. J.L. Wilkinson, owner of the Monarchs, responded to this information by stating that they may as well refund all of the tickets because the Monarchs sure as hell weren't going to be playing in such a place. Town policies were quickly amended and the Monarchs went on to play.

There is a section of wall dedicated to similar teams that weren't necessarily comprised of African-American players, like the House of David. In case your bad at picking up on things, they happened to be a Jewish barnstorming team. A team that would temporarily hire Satchel Paige and put him in a long red beard and let him be Satchel Paige. Just down the wall from this was an article describing a town that hosted a game between a team of African-American barnstormers and a squad of Klansmen. Yup. That was apparently a real thing. The people in the stands somehow acted like rational humans throughout it all and the Klansmen lost.

I kept walking while chuckling in amusement at that last item when World War II hit. Suddenly the walls became plastered with articles from newspapers all over the country filled with quotes about the hypocrisy of letting everyone fight in the war regardless of race, but stopping some from playing baseball because of their skin color. The familiar names start popping up: Branch Rickey, Jackie Robinson, Roy Campanella. Not enough Minnie Minoso for my blood, but I am horribly biased. There's a nice corner dedicated to the integration of baseball, proudly displaying the early adopters of the new way on the left wall, listing each team and their first African-American player and the year they joined their squad. Our White Sox were the sixth team to do so, third in the American League behind the Indians and the Browns. The right side of the wall shows the final eight teams, including the long holdouts like the Yankees and the Red Sox. A video plays while you're observing and it is considerably (and understandably) less than kind towards the Yankees and Red Sox. Then again, a team like Boston that took 12 years to finally integrate kind of deserves it.

This section was home to my two favorite quotes in the museum. The first came from then National League President and future commissioner Ford C. Frick when he was informed that the St. Louis Cardinals planned on striking instead of playing against the Brooklyn Dodgers squad that now featured Jackie Robinson. Frick did not care for this idea.

If you do this you will be suspended from the League. You will find that the friends you think you have in the press box will not support you, that you will be outcasts. I do not care if half the league strikes. Those who do it will encounter strict retribution. They will be suspended, and I don’t care if it wrecks the National League for five years. This is the United States of America, and one citizen has as much right to play as another.

The National League will go down the line with Robinson whatever the consequence. You will find that if you go through with your intention that you will have been guilty of madness.

The strike did not happen.

The second came from beloved future White Sox owner Bill Veeck, shortly after signing Satchel Paige to the Cleveland Indians on his 42nd birthday. A writer for the Sporting News did not care much for this move, decrying it as nothing more than a publicity stunt and assuring everyone that if Paige was a white man this signing would never have come close to even happening. To which Veeck, wit sharp as ever simply replied

"If Satch were white, of course he would have been in the majors 25 years earlier and the question would not have been before the house."

A sad thing happens shortly after you reach the integration section: dissolution. With all of the best players being signed to teams in the American and National Leagues, the teams across the various Negro Leagues could no longer remain competitive and by the 1960s, ultimately had all folded. The ultimate success story had ended. It's bittersweet reaching this part of the building. You've spent the past hour and a half or so falling in love with these leagues that ceased to be before you were born (for most people on here at least). And then because the country finally got its head out of its own ass, the leagues could no longer function.

You move on and find the Buck O'Neil exhibits, including a wall filled with tiny baseball plaques from people who made donations to the museum on Buck's 100th birthday. If you take the time to look for it, you'll find a familiar last name on the wall. I was tempted to sneak a picture, but I figured Jim would be happy enough just knowing it's there. Just past this is a stretch of lockers filled with jerseys and replicas of the Hall of Fame plaques from Cooperstown for all the players enshrined there. In a strange but fantastic moment, you happen upon a giant case of baseballs, all autographed by hundreds of men who played in the Negro Leagues, all of which have been donated by Geddy Lee. Yes, that Geddy Lee. It's confusing and amazing and I spent far too much time reading signatures.

And then it happens. You've run out of exhibits. You get ready to exit through the gift shop. But then you look up and realize how you have to get there: you finally get to walk onto the Field of Legends. Cool Papa Bell greets you in left field. You discover Oscar Charleston and Leon Day are the other two men in the grass. Buck Leonard, Pop Lloyd, Judy Johnson, and Ray Dandridge stand around the infield. Of course Satchel Paige is pitching to Josh Gibson, because who else would make up that battery? Martin Dihigo stands ready at the plate and you stand there wishing you were old enough to have seen this hypothetical game.

I had hoped there would be some Chicago American Giants memorabilia available in the gift shop, but all I could find was a poof-ball topped winter cap. I said my goodbyes and walked back to my car, headed home to Manhattan.

The Negro Leagues Baseball Museum is not a Hall of Fame, as the building politely reminds you multiple times. It is a history museum, showing you all of the ugly that came with the past and then treating you to the beauty it finally became. It's not Cooperstown. There is almost nothing about the Chicago White Sox in the building. But if you like baseball enough that you regularly come to South Side Sox, you need to take a visit to Kansas City some time and spend a few hours walking around 18th and Vine.