Tigers and Red Sox deliver a postseason classic, courtesy of balls in play

Strikeouts are neat and all, but contact led to chaos in Game 2 of the ALCS

Share All sharing options for: Tigers and Red Sox deliver a postseason classic, courtesy of balls in play

Because sometimes you just want to talk about a good game you saw...

I like a fierce 1-0 pitchers' duel as much as any other baseball fan, but I had a hard time wrapping my arms around Game 1 of the ALCS as a "classic." Sure, five Detroit Tigers pitchers came within two outs of recording the first no-hitter in LCS history, and the Red Sox had a runner in scoring position at the end of it, but outside of Stephen Drew's dramatic, over-the-shoulder catch, I can't say I was ever compelled by the action.

Another way of saying it is that I like my 1-0 games clean -- for instance, Game 4 of the 2005 World Series. The Detroit-Boston Game 1 was far from it, from Anibal Sanchez lasting only six innings because of six walks. The Red Sox only put eight balls in play over the first eight innings while striking out 16 times, griping about Joe West when his strike zone, if anything, tilted in Boston's favor. The game still took three hours and 56 minutes, which is too much time to too few baseball events.

Game 2 made up for the deficit. Even the strikeouts felt purposeful, rather than a grudging inevitability.

Max Scherzer fanned 13 Red Sox, and he looked the part more than Sanchez (two walks, two hits, 108 pitches over seven innings). The Tigers created genuine action against Clay Buchholz, including a big two-out homer in the sixth that seemingly put the game out of reach.

(A fan ripped the Avila ball out of a woman's hands and threw it on the field. The guy was ejected from Fenway, and fans in the section said he was spewing racial insults the whole game.)

So that's already a sizable list of things for what appeared to be a lopsided game. When Scherzer left the game, chaos ensued.

none of these plays are strikeouts what happened

Jim Leyland's crew went from riding a strength to attempting to work around a weakness. And when the iffy bullpen couldn't miss bats in the same way, that put the defense on trial, too.

Jose Veras, Drew Smyly and Al Alburquerque set the stage when they loaded the bases with two outs for David Ortiz. Leyland called for Joaquin Benoit. The move did not faze Big Papi. Ortiz turned on the first pitch for his third game-tying postseason grand slam despite an all-out effort from Torii Hunter, which resulted in a couple of Flying Vees. 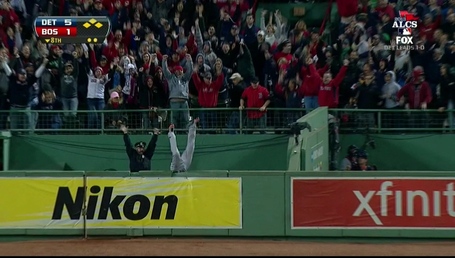 As much as I'd like to knock Hunter, it's hard to peg him with a misread. Benoit left a changeup a little up, Ortiz hit a screamer, and only a perfect route -- one that anticipated a bit of a hook -- would have robbed Ortiz of the slam.

And even if you maintain that Hunter was to blame for Ortiz's slam, Prince Fielder stole the spotlight with a couple of misplays in the ninth that cost Detroit the game. He came off the bag when Jose Iglesias' off-balance throw stood no chance of getting Jonny Gomes ... and it bounced past him, anyway.

Then he failed to catch a pop-up along the wall, as the fans played it perfectly -- they didn't interfere with the catch attempt, but they didn't give any ground, and Fielder ended up alligator-arming the play. Afterward, a child met his acquaintance.

A not-too-wild pitch moved Gomes to third, and a single through a drawn-in infield turned Fenway into a madhouse.

Here's what's hard to rationalize with some distance: Game 2, with more runs, more baserunners, and the same amount of pitching changes, took 30 fewer minutes. That seems to be a point in favor of the "Games Take Too Long" crowd.

That was an incredible, tension packed game, but hey, keep complaining about how long it took. #ugh

... and sometimes I'm with him. But when you see the same two teams the very next day cram way more action into a smaller window of time, it certainly highlights how much wasted time can be eliminated without it seeming rushed or forced.