Why do White Sox solutions have such problems?

Previous attempts to integrate position players has resulted in subtraction by addition, and the looming megadeal for Jose Dariel Abreu is the riskiest attempt yet

Share All sharing options for: Why do White Sox solutions have such problems?

The White Sox's reported/impending signing of Jose Dariel Abreu has its doubters, and mainly for two fair reasons:

I, too, have my concerns. However, they have less to do with Abreu, and more to do with the White Sox, who have been mired in a slump when it comes to adding position players to the everyday lineup from the outside. 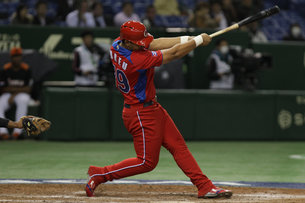 Had the Tigers acquired Abreu, I'd pencil him in for .300-30-100, because that's what happens in Detroit. I've said it before, but the Tigers' major-league scouting is probably the biggest reason why they have won the AL Central three years running. It's not just that they've had the resources to acquire premium talent like Miguel Cabrera and Prince Fielder, because those guys could make any front office look smart in their prime.

The proof lies more in the tiers below the nine-figure contracts, because even those players deliver what's needed, and without a grace period. Torii Hunter? Victor Martinez? Jhonny Peralta? Omar Infante? Austin Jackson? Johnny Damon? Hell, they even got a 133 OPS+ out of Wilson Betemit. It's a lot easier to pull off an aggressive win-now strategy when the players perform immediately.

When the White Sox have made similar mid-grade investments over the same period, it blows up in their faces. It started with Nick Swisher and Orlando Cabrera, who didn't meet expectations for one reason or another in 2008 and became one-and-done South Siders.

At least they still resembled MLB players, in spite of their foibles. The more recent investments have struggled to clear that low bar.

Over the last five seasons, the Sox have acquired five players with the intent of giving them serious playing time for multiple years. Out of those five, the only one who looked like the player the Sox had in mind was ... Juan Pierre. And even then, it took him a while to get going, as he couldn't get over the Mendoza Line for good until May 2.

Still, by the end of his first season, he gave the Sox an above-average OBP, strong baserunning and good range in left field. It may not have been scintillating, but he's still the only player who has provided the courtesy to join the Sox and look like the player on the back of his baseball card in his first season.

(It all fell apart for him a year later, but this is what qualifies as a victory when it comes to importing position player talent.)

The other four were unmitigated disasters in their first tries with the Sox, and that's what makes me nervous about Abreu. There would be some solace if these failures provided lessons to apply towards this administration's most significant investment to date, so let's see if there's anything to it.

Selected off waivers from the Toronto Blue Jays on Aug. 10, 2009

After an encouraging first week, Rios fell into a massive 5-for-64 slump that left Ozzie Guillen disenchanted:

"What have I seen from Rios? A lot of outs," Guillen said. "The only batting-ninth guy making $5 million was me.

And it wasn't much better in center field: 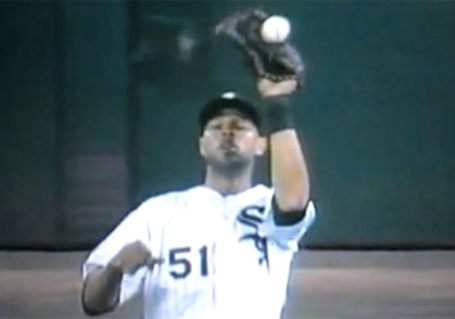 Mechanics: His batting stance was in the process of degenerating when he came to Chicago, and Greg Walker didn't exactly know what to do with that weird playing-a-piano-standing-up stance he deployed. It took multiple seasons and multiple coaches to unpack.

Role: After spending his entire career in Toronto playing right field, Ozzie Guillen played Rios in center over the last two months of 2009, because ...

Clubhouse: ... Kenny Williams acquired Rios without having an obvious opening in the outfield, since right field was occupied by Jermaine Dye. Dye, in the midst of a slump and confronting an uncertain future during a contract year, didn't care for the implications. As a result, Guillen had to navigate a delicate situation, which he resolved by playing Rios in center and leaving Dye alone. Even then, that didn't stop Dye from blaming a supposed outfield rotation that never happened for his problems after the season.

Rios revived his career with a decent 2010 in center field before falling off a cliff again in 2011. But it wasn't until he rose into a more natural-looking stance and returned to right field that his career found its old track.

At the plate, Teahen didn't look much different from his Kansas City self. It was in the field where his game fell apart. He just looked plain uncomfortable doing everything at third base, making so many miscues of so many varieties that it inspired a flow chart. The poor mechanics underlying it all led to a broken finger on a routine grounder at Tropicana Field in late May, and he never came close to adequate in any form afterward.

Talent: Teahen's stats had been going in the wrong direction for years, to the point that he couldn't even secure a starting job with the Royals at a couple positions. Still, he showed enough at times to look like a decent change-of-scenery candidate, which is why the trade wasn't a bad one. The three-year extension on the other hand...

Health: Even before Teahen broke his finger, there were murmurs that his back had been bothering him, causing all the awkward motions in the field. I'm not inclined to give it too much weight, because if a third baseman has back problems, we generally hear more about them. Plus, Teahen couldn't hold down third base with the Royals, so the hot corner probably wasn't all that natural to him anymore.

Contract: Teahen was set to enter arbitration when the Sox acquired him, and thus the three-year extension was unprecedented job security. I don't think the contract factored into it, because he failed to rediscover his form after the Sox traded him to Toronto. It's more likely that he peaked early, and it's been a steady decline to independent ball since.

We're all too aware. He came six plate appearances short of qualifying for the worst batting average (by far) in recorded history, and he offered nothing else of use except walks.

Health: He underwent an appendectomy in the first week of the season and returned six days later, which surprised everybody. It would be the first of a few times he overstated his healing abilities. He slumped the rest of the season, although he probably wouldn't have plummeted to the depth he did had ...

Managerial negligence: ... Ozzie Guillen not abandoned his post in a power play with the front office. Dunn may not deserve a ton of sympathy for his $12 million effort, but he was collateral damage.

Contract pressures: The contract did factor into it -- he wanted to get back into the lineup and earn his money, and Guillen also pointed to his salary as a reason to play him.

League/Role: Dunn had spent his entire career in the National League, and thus had logged very little time as a designated hitter. It's impossible to tell how much either of these played into his problems, because he spent a few days at full power before the surgery messed up his timeline.

It took him a hilariously long time to draw his first walk, setting the stage for a season that would be the fourth-least valuable in baseball, according to FanGraphs.

Health: Keppinger broke his leg in the offseason in a stair-climbing accident, which originally delayed the formalization of the contract. The leg healed in time for spring training, but the lack of an offseason throwing program caused his shoulder to act up during Cactus League play. That apparently never healed, and he underwent surgery on Sept. 24.

Role: He was also shoehorned into the No. 2 spot for supposed bat-handling abilities, even though he liked that Joe Maddon let him swing away lower in the order in Tampa Bay. He also started his first season as an everyday player, but he basically started every game of the second half with the Rays, and seemed to thrive with more playing time.

Contract: The three-year, $14 million contract was his first real measure of big-league security -- or the first contract he had to live up to. But the Sox really didn't ratchet up expectations, because even after signing him, they looked to find a left-handed bat to pair with him at third base. They couldn't land Jack Hannahan or Eric Chavez, but Conor Gillaspie turned out to be an OK find.

Talent: Between his health and his lack of power, Keppinger had a hard time playing (well) enough for two good seasons in a row. It's possible the Sox caught him on his off year, but other factors really drove him into the ground.

We've been speculating about Abreu's true talent this whole time, and we won't know about his health until the results of the physical are made public. These are the big issues, and all we can do is shrug.

Contract: $68 million is the largest contract ever given to an international player, and it's also the largest sum in White Sox history, although not the front runner in annual value. This is going to drive a lot of the discussion.

Role: Abreu only plays first base, so this should make his life fairly uncomplicated in this respect. Especially if you compare him to Alexei Ramirez, who played everywhere in Cuba and made his first major-league start in center field on Opening Day in 2008. Also, given Abreu's size and strength, nobody's going to ask him to bunt or hit the other way.

Clubhouse/depth chart: Looking at the under-contract talent, Abreu seems to have first base mostly to himself, with Dunn taking some of the reps. But Paul Konerko isn't officially out of the picture, as the two sides are supposed to meet in November to discuss his future, and that's where it could get hairy.

The remainder of Konerko's skills -- hitting lefties, scooping at first base -- should be covered by Abreu. The only argument left is that Konerko can provide veteran mentorship, but I'm not sure I buy it. While he's owned the captaincy since 2006, he said during the final series of the season that turning his attention outward to other players isn't natural. He's been a leader, but only by example, and sometimes his example doesn't seem healthy (looking at you, Gordon Beckham). A clean break seems to be in order.

Mechanics: The Sox have yet to hire a hitting coach, and it's probably good that they've waited until they get Abreu into the fold. Whoever replaces Jeff Manto, I'd hope he has a good idea on how to address inside fastballs. That's a reported weakness of Abreu's, and something Avisail Garcia and Dayan Viciedo need help with as well.

Managerial negligence: For Robin Ventura, Abreu's assimilation will be Job One of Year Three, assuming the signing is finalized. It's going to take patience, communication and cooperation, which Ventura can do. It may also take creativity and radical maneuvers, which may not be in his arsenal. Keppinger's awful start took place under his watch, as did Dunn's awful finish. A lack of depth may have left him with nowhere to turn, but an Abreu face-plant can't be allowed to snowball in a similar fashion.

A point in Ventura's favor: He oversaw Garcia's successful introduction to the 25-man roster. That's one of the few things that went right for the 2013 White Sox, and one of the most crucial for the future of the franchise. The outfielder has flaws to address, but he rose above a potentially toxic combination of hype and despair to lay groundwork for an exciting White Sox career. In the process, maybe he also provided some blueprints for an environment that allows an outside addition to actually add up.