Introducing: The White Sox around the world, 100 years later

Share All sharing options for: Introducing: The White Sox around the world, 100 years later

On this date 100 years ago, the Chicago White Sox and New York Giants played an exhibition game in Beaumont, Texas. The Giants won 3-2, and the Chicago Tribune's account painted it as a nail-biter. A ninth-inning solo shot by White Sox outfielder Sam Crawford narrowed the Giants' lead to one, and the game ended with a play at the plate.

Now, Crawford's Baseball-Reference.com page never shows that "Wahoo Sam" played for the Sox. It shows that he's a Hall of Famer who started his career with the Reds before gaining acclaim while playing alongside Ty Cobb with Detroit, and he still holds the all-time record for triples. Yet there's no trace of Chicago anywhere, and so it's highly unusual to see his name under the White Sox's column in a box score. 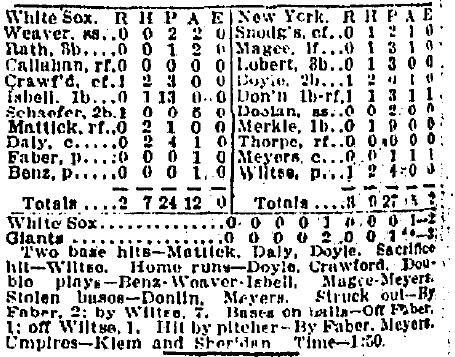 But there's a helluva reason for it.

On Nov. 1, 1913, the White Sox and Giants were 15 games into an exhibition tour that would take them to five continents in five months. They woud head to Japan in early December, work south to Australia, travel across the Indian Ocean to Egypt, and then cut through the Mediterranean for a final European leg that started in Rome and ended in London.

The nature of the tour wasn't agreeable to all players, so the teams took on a few big names from outside their regular rosters to supplement the star power. That explains why Crawford played for the Sox. That also explains why, under the Giants' column in the box score to the right, you'll see the name of Jim Thorpe.

A world tour had long been in Charles Comiskey's plans, according to "The Tour to End All Tours: The Story of Major League Baseball's 1913-1914 World Tour" by James E. Elfers. When Comiskey was a star first baseman for the St. Louis Browns in the late 19th century, he turned down Albert Spalding's invitation to join the promoter on his own globetrotting journey in 1889-90 for unclear reasons. The idea stuck with him, however. As owner of the White Sox, he first had the inkling to start his own tour after the Hitless Wonders won the World Series in 1906, but he couldn't find a willing partner until 1913.

That partner was John McGraw. The Hall of Fame manager had his own plans of taking the Baltimore Orioles to Europe in 1896, but those dreams went unfulfilled. As president and part owner of the New York Giants in 1913, he wanted to show off one of the world's great franchises with a tour of his own.

Comiskey and McGraw were disparate personalities who didn't see eye to eye on much, but they had two big things in common. One was a shared distaste of Spalding, whose tour was more of a circus than an exhibition of the sport. On the 25th anniversary of Spalding's tour, both had an interest of sticking it to one of the game's most infamous promoters with a bigger, better and more authentic journey.

They also had a mutual friend in Ted Sullivan, an early baseball pioneer who is hard to describe concisely. This outstanding thread at Baseball-Fever.com details what might be "Baseball's Fullest Resume." According to that post, Sullivan and Comiskey met as teens at St. Mary’s Academy and College in St. Mary's, Kansas. Comiskey was sent there by his parents to shake the baseball bug out of him and get him into plumbing, a respectable field. Sullivan, a few years older than Comiskey and the manager of St. Mary's baseball team, recognized his talent and kept him in the game.

Comiskey followed Sullivan as he formed independent teams and the first minor leagues, and stories have Sullivan teaching Comiskey and the ins and outs at first base (Comiskey eventually became one of the early greats at the position, a defensive innovator who is said to be the first first baseman to play off the bag).

Had Sullivan and Comiskey never crossed paths in the 1870s, would the White Sox even exist? It's a good question, but for the purposes of this project, we do know that Sullivan was vital to this particular tour. At this time in 1913, Sullivan is Comiskey's closest friend and a manager of his business affairs. He had also developed a tight relationship with McGraw over the years (he was involved with the planning of the 1896 tour that never was), and the mutual ties were of critical importance, according to Elfers:

Sullivan's importance to the project is impossible to underestimate. It was, arguably, the key point of agreement between McGraw and Comiskey. Without some sort of mutual blind trust, it is unlikely that any tour could have taken lace. Neither man would have revealed their financial situation to one another, yet without such cooperation, a tour would have been impossible. Both Comiskey and McGraw entrusted Sullivan with their portion of the capital for the tour. Sullivan, perpetually circumspect, made an excellent friend and blind trust, one unlikely to betray either man's confidence. Such confidence was essential, for unlike the previous world tour, which had been personally financed and under the control of one man, two contrasting and dominant personalities would attempt to share the spotlight -- and the glory.

Elfers writes that Sullivan brokered the meeting between Comiskey and McGraw at "Smiley" Mike Corbett's bar at 12th and Lyttle in Chicago. In Sullivan's book about the tour, "History of World's Tour," he describes the outcome as a triumph for sport:

The world's tour of 1913 of the Chicago White Sox, and New York Giants, under the auspices of Charles A. Comiskey, President White Sox, and John McGraw, Manager of the New York Giants, will go down in base ball history, as the greatest achievement of the National game of America, for the reason that it was planned, executed and jointly financed by the game's two greatest leaders and sportsmen. These gentlemen did not ask the aid of any advertising firm to help them to finance their circuit of the globe, but they risked and invested the money they made out of their country's game in trying to transplant it on foreign shores.

They would hash out the details over the regular season whenever they could meet throughout the regular season. Both hoped they could get serious face time in October, as Comiskey and McGraw had championship aspirations at the start of the season. With enough breaks, the exhibition tour could turn into a World Series Around The World.

McGraw's Giants kept up the end of their bargain, going 101-51 and winning the National League pennant. The White Sox didn't have enough, finishing fourth in the AL with a 78-74 record, 17½ games behind the eventual world champion Philadelphia Athletics.

Had the White Sox won the World Series, Comiskey would have brought the entire team along to make it a real global clash of titans. As it stood, only seven members of the next year's White Sox joined the tour for its entire duration -- and one of them, Red Faber, would play for McGraw overseas. The Sox who remained Sox were manager Jimmy Callahan, pitchers Jim Scott and Joe Benz, outfielder Tom Daly, catcher Andrew Slight and third baseman Buck Weaver.

But Commy was able to supplement his team with other well-known names. Crawford became a White Sox for a winter, as did fellow Hall of Famer and legendary Red Sox Tris Speaker. Washington's Germany Schaefer, immortalized in baseball lore for stealing first base from second, was brought along for entertainment value.

And during the domestic portion of the tour, other famous Sox from the era tagged along, including Ray Schalk, Doc White, Hal Chase. And as we go along, we'll see that the games featured other guest stars as well.

The tour, which was announced in the New York Times on Feb. 2, started in Cincinnati on Oct. 18, so the first few installments of this series will be getting up to speed on the White Sox' travels throughout the Midwest. Once I get up to "real time," I'll have a post on every active day of the tour. They traveled by ship, so there will be days and the occasional week where nothing's doing.

The books by Sullivan and Elfers, among others, will be valuable resources, as will newspaper accounts of the day and whatever else might turn up as we go along. Some installments may only consist of spare game details, and others might require two parts. I have an outline that will carry us through to spring training, but I'm not entirely sure what I'm going to find along the way. Hopefully it'll be as interesting to you as it is to me, and maybe it'll make the offseason just a little shorter, too.